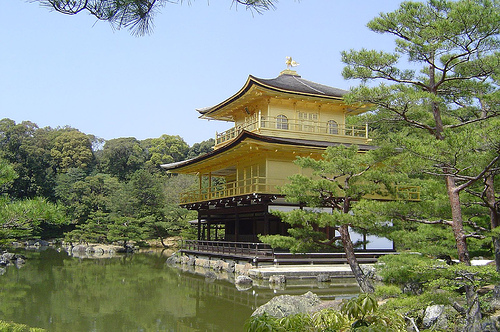 One of the delights of learning a new language is discovering words that have no equivalent in your own language, words that you never imagined existed, but that capture ideas that are quite familiar.

The Japanese language has some wonderful ones; below are ten examples. Some are words and phrases that can be translated literally, but may make no sense this way and actually signify something quite different. Others have absolutely no equivalent in the English language.Komorebi: This is a favorite among many non-native Japanese speakers (and also among people who are yet to learn Japanese at all) because it describes something that is universally acknowledged as beautiful and yet that no other language has thought to name – the gentle, broken sunlight that filters through the leaves of a tree, as well as the light and shadow on the ground as a result of such light.

Irusu: This one describes something that people all over the world do. Pretty much everyone has done it at some time in their life, and expats in Japan are often surprised, charmed, and delighted to find that there’s actually a single word for it. Irusu is essentially the act of pretending to not be at home when an unwanted visitor rings your bell. Yes, there’s actually a word for that entire surreptitious performance!

Otsukaresama desu: This one literally translates to “You’re tired,” but it’s almost always used to convey much more – it’s a casual but earnest way to tell someone that you appreciate their hard work. The phrase can be used as a preface to a request (for example, if you call up someone who you know has had a hard day, and ask them to do some additional work for you) or as a form of thanks for a difficult job done well (for example, you can say it to a team member when they submit a report to you).

Kyoikumama: This again is something that exists all over the world – the mother who obsessively and relentlessly pushes her children to do better at school, usually to the detriment of the child’s emotional, physical, and social development. The world literally translates to “education mother”, but of course that doesn’t convey the entire meaning. There are of course also similar phrases in English – the “tiger mom” for example, but again, these phrases don’t capture all the connotations and implications of the Japanese word.

Wabi-sabi: This is a Japanese philosophical concept in which transience and imperfection are accepted as part of life and beauty – in fact, they’re not merely accepted (which would imply a certain reluctance and resignation), but seen as essential, natural, and even desirable. Quite a few people across the world have heard of wabi-sabi (even if they don’t remember the word) in the context of the Japanese art of repairing broken pottery. It is also an important principle in Japanese poetry, and certain types of Japanese music and gardens.

Ozappa: Ozappa is an adjective used to describe someone who doesn’t worry about the details, who is quite carefree; someone who will take whatever comes his way and cheerfully deal with minor inconveniences.

Tsundoku: This relates to the habit of buying books and not reading them, allowing them to pile up all over your house – another thing people all over the world are familiar with. The word is usually used to describe the person with such a habit, but it can also be used to describe the act or habit itself, or even the books accumulated as a result of the habit.

Ganbatte: This is a common phrase of encouragement that encapsulates many such English phrases – cheer up, chin up, good luck, hang in there, and so on.

Natsukashii: This word has a pretty close equivalent in English – nostalgia or nostalgic – but it’s not quite the same thing. Natsukashii has connotations of fondness and being transported to the past that ‘nostalgia’ doesn’t quite capture, and it doesn’t have the negative connotations of loss or dissatisfaction with the present that the English word has.

Mottainai: The English phrase ‘What a waste!’ comes closest to explaining the meaning of mottainai, but the Japanese word also conveys the preciousness of what was wasted, and the regret at having wasted it.

Do you have any more to share? Let us know in the comments!