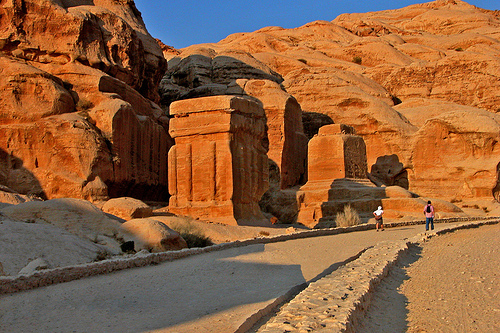 Jordan is the abode of many intriguing and significant historical sites. It also features great diversity, ranging from spectacular desert scenery and the ancient ruins of Petra to the salt-laden Dead Sea. Jordan is also famous for the warmth and hospitality of its people. Many expats move to Jordan to work for international organizations or companies in the fields of oil and gas, finance and media.The local population is largely Muslim, although the government remains secular. Jordan is known for being among the most liberal of all Middle Eastern nations. However, expats are likely to encounter certain cultural and other differences that may take them by surprise.

Since the majority of the people are Muslim, there are many traditional customs that govern society, and expats are expected to be sensitive to them. One of the main customs is conservative dressing. Women are expected to dress in clothing that covers the shoulders and legs. This means that in Jordan you won’t see, and also won’t be able to wear, things like shorts, tank tops or clothing that is form fitting. In many conservative Muslim societies, wearing a head covering is necessary, but this is not the case in Jordan. Muslim women do adhere to the custom of wearing the traditional headscarf, but foreigners do not have to do the same. Expats can be more relaxed about what they wear in places that are mainly frequented by tourists such as Petra or the Dead Sea beaches. However, they must remember to dress appropriately if they plan to explore the surrounding towns.

The emphasis on modesty also extends to social behavior and interactions between men and women. It is common for men to shake hands with other men, but they must be careful when doing the same with women. In the deeply conservative Middle Eastern countries, men and women do not interact at all. But Jordanian society is more liberal and so the norm is that men should wait for the woman to initiate the handshake. The older generations may still prefer to avoid touching completely. Public displays of affection between couples are frowned upon. However, it is common and also acceptable for male friends to hold hands.

Even though there are rules that govern touching and social interactions in Jordanian society, when it comes to personal space, expats shouldn’t expect to have any! The concept is not very common and is perceived very differently in Middle Eastern countries compared to the west. People rarely form queues and others will swiftly step in front of you if you don’t push forward. Sometimes, people may also come up to you for a chat if they see you sitting alone. Jordanian society is extremely hospitable, and sometimes you may just have to give up your personal space and be swept along by the friendliness.

It’s hard not to notice that Jordanian society does display some amount of gender inequality. Women may feel that they are not being treated on a par with men. For instance, some locals may insist on referring to a woman in relation to her husband instead of simply addressing her by her name. There is also often a double standard for female foreigners. Jordanian women do not dress in tight fitting or revealing clothing and it is expected that everyone maintain a level of modesty. But still in some areas, foreigners dressed in short sleeved or tight garments may invite stares and inappropriate comments.

Jordanians do not have much use for utensils while eating. Their implement of choice is the bread itself, which is torn into pieces and used to scoop up the food. A visit to a local’s home for a meal may involve a quick lesson on how to turn your bread into makeshift spoon. Another practice expats will notice is that no one drinks while eating. It is only after the feast that everyone gets their glasses of water or cups of tea and coffee. It is customary to drink sweet, black tea while lounging after a meal and engaging in conversation. If you don’t want any, you can simply say da’iman (‘may it always be thus’).