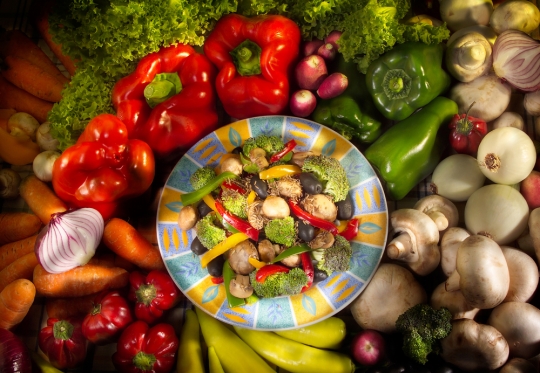 Vegetarians and vegans in Kuwait might find that they are met with some confusion. However, just because eschewing animal products isn’t as common in Kuwait as in the UK or US, vegetarian expats moving there need not worry. Don’t let blank stares or questions about whether you get enough protein put you off. You can find vegetarian food here more easily than you may think. In fact, these days you’ll find non-dairy milks in supermarkets, vegetarian and vegan cafes around the city and even veggie Instagram celebrities.

Be Café
Be Café is a plant-based café offering smoothies, juices, hot drinks, desserts and a limited food menu. They have specials every week in the form of ‘Soulful Saturdays’, when they focus on a specific international cuisine; the café offers different cuisines every week. They also host art and meditation workshops.

Juna’s
Juna’s offer weekly meal plans, delivered to your door. Don’t have time to cook? Juna’s will deliver healthy, plant-based food (with gluten-free options) right to you, five days a week (Sunday to Thursday). Prices start at 65 KD per week.

Greenland
Greenland is a vegetarian Indian restaurant; dishes are primarily North Indian, with some vegan options. The food is reasonably priced. If you’re missing dosas, samosas and chana masala, Greenland’s the place to go.

Rustic Garden
Rustic Garden is all-vegan bakery – the first of its kind in Kuwait. Rustic Garden was founded by a 17-year-old high school senior who saw success after selling her vegan baked goods at seasonal markets. Order via WhatsApp and get vegan goodies such as cinnamon rolls, chocolate chip cookies, raw banoffee pie or gluten-free honeycomb bites delivered to your door.

OVO
Calling themselves a vegan, vegetarian and flexitarian eatery, OVO has mainly vegetarian and vegan dishes with a few non-veg options. Dishes such as beetroot carpaccio, coconut curry and raw vegan mango cheesecake mean vegetarians and non-vegetarians alike will be satisfied after eating at OVO.

Love
Love is a non-vegetarian restaurant with a separate vegan menu, including pizza with vegan cheese, Portobello steak and pasta. Love has several locations in Kuwait City.

If you’re visiting a non-vegetarian restaurant with colleagues or family, your best bet for finding a veggie meal in Kuwait is to choose an Indian, Lebanese or Egyptian eatery.

At Indian restaurants, you can often find vegetable curries. Be sure to ask the kitchen to cook the vegetables separately from the meat, plus ask them to leave out ghee or butter and use vegetable oil instead.

In Egyptian eateries, look for koshari (made with pasta, rice and lentils, this dish is usually vegan) or taameyya (falafel made with fava/broad beans).

It’s easy to order a vegan meal anywhere if you know what the most common vegetarian and vegan dishes are in the cuisine.

These days, you can find veggie meats, tofu, non-dairy milks and more in Saveco, Sultan and other supermarkets in Kuwait City. You can also order more specialist ingredients online at All Things Vegan. Here, you’ll find energy bars, vegan chocolate chip cookies, protein powder, vegan cheese popcorn and more. If you’re missing some of your favourite Whole Foods finds, then have a look at All Things Vegan, since they stock some popular vegan products from the US.

Wholesome Foods, a supermarket in Salmiya, might also satisfy your Whole Foods cravings, with its shop setup and colour scheme even looking reminiscent of Whole Foods. Selling healthy and mainly organic products, you can stock up on veggie and vegan goods at Wholesome Foods.

Resources And Connecting With Other Veggies

One of the best things you can do to find vegetarian food and make new friends at the same time is connect with other vegetarians and vegans in Kuwait. Not only is this helpful in terms of support and community, but other veggies will be able to tell you the best new restaurants, which supermarkets to go to and where to find that ingredient you really need for your favourite dinner. It’s never a bad thing to have like-minded people in your life, and as expats we can all use new friends! If you’re new to Kuwait City, then connecting with other veggies can be a great way to meet others.

The Kuwait Vegan Society is the first and only vegan society in Kuwait, founded in 2004 by Dr. Abir Al Sharhan after she returned from her studies in Canada, where she first went vegan. At the time, she noticed that there were few resources in Arabic about veganism and how to go vegan. She set up the society to be able to provide these resources. The Kuwait Vegan Society also hold workshops and events. Check their Instagram for details.

Vegan Kuwait is a private Facebook group. Apply to join and once accepted, you’ll find an active group full of members who post recipes, links to resources and who also hold meetups and meals, meaning you can meet others in the city. If a meetup isn’t happening soon, you can start one!

Where to Eat Vegan Kuwait is an invaluable resource for vegetarians and vegans in Kuwait City. This Instagram account is extremely up-to-date with the latest vegan and vegetarian finds in the area. The author has posted a number of vegan meal plans, vegan dishes at non-veggie restaurants and reviews of fully plant-based restaurants.

As you can see, vegetarianism and veganism are growing in Kuwait, and there are a number of resources for those who don’t consume meat. Although at first glance a lot of restaurants might appear to be meat-heavy, when you dig deeper, you’ll find that there are hidden veggie gems, as well as the opportunity to meet likeminded expats and make new friends!