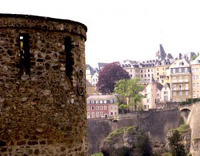 Luxembourg or as it is officially known, the Grand Duchy of Luxembourg, is a landlocked country, sharing a border with Belgium in the north and west, Germany in the east and France in the south. It is the only remaining grand duchy in the world and is headed by a grand duke. It is one of the founding members of the EU and the capital city of Luxembourg is home to many agencies and institutions of the EU. Luxembourg also has a strong economy with the world’s second highest GDP per capita. Here are some of the reasons why Luxembourg is such a great expat destination.Social security system

The national health insurance fund provides cash or kind payments in cases of illness or maternity. Employers and employees make equal contributions to the payment. Even if an individual has not been covered for a specific period of time, he or she can still be eligible for sickness allowance. But eligibility for sickness or maternity benefits requires an association with the fund for a minimum of 6 months prior to the sickness or childbirth.

Social security also includes dependency insurance and reimburses the costs of aiding a dependent individual at home or in a nursing home. Family allowance covers child benefit, which is paid at the birth of the first child and varies depending on the number of children and their ages. The social security system also provides unemployment benefits. Individuals who have lost their jobs and have been associated with the scheme for 6 months in the previous year are eligible for this benefit.

Employees aged 65 and above can avail of retirement pension after at least 120 months of contributions.

In case of death, the family is eligible for survivor’s pension. This benefit is accorded if the deceased person was insured for a minimum period of 12 months.

Those who work in the financial sector are able to find lucrative employment in Luxembourg. Many multinational companies and major international banks have their offices here. The country’s financial services industry employs nearly 48,000 individuals directly and 30,000 indirectly. A large percentage of these employees are foreign residents and those who commute from bordering countries like Belgium and Germany. In addition to the stimulating financial environment and the steady recruitment of multilingual staff, another factor that makes Luxembourg an attractive expat destination is its simplified process of granting work permits to highly qualified non EU-citizens.

The country has always enjoyed a politically stable environment and a healthy economy. Luxembourg’s strategic location makes travelling to all major European cities quick and convenient. It lies at the crossroads of the European motorway network and is also connected to the French TGV train system.

The capital city of Luxembourg hosts many cultural and sporting events due to its high-quality infrastructural facilities. There are also traditional events such as fairs and customs that date as far back as the Middle Ages.

Luxembourg enjoys an excellent reputation for its gastronomy. You can find various top quality restaurants here, ranging from ones that serve hearty traditionally Luxembourgish dishes to international ones that specialize in European, Middle Eastern, Asiatic and African specialties. In fact, Luxembourg has the highest concentration of Michelin stars per resident in Europe.

The Moselle Valley is world-renowned for its white wines. Luxembourgh also produces other varieties of wine such as Elbling, Pinot Gris, Rivaner and Riesling.

The education system is based on the three official languages of the country French, German and Luxembourgish (the native language), as also English. As a result, those with this type of schooling are able to work in or do business with the neighboring countries of France, Germany and Belgium, and also the international community.

Luxembourg also provides higher education and professional training. Specialized training in the fields of finance and banking are offered through institutions like the Luxembourg School of Finance at the University of Luxembourg and the Institute for Training in Banking (IFBL – L’Institut).