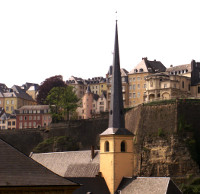 Luxembourg, one of the smallest and most charming countries and a hidden gem in Western Europe, is surrounded by Belgium, France and Germany and popular with expats due to its location, size and culture.

Voted the European Capital of Culture back in 2007, Luxembourg has developed into one of the top tourist destinations in Europe, thanks to its large diversity in such a small area. With a population of 512,354 and the national language of Luxembourgish (although German, French and English are also spoken), expats have decided to move to the country to set up home and gain employment.

Members of the EU are able to live and work in Luxembourg without a work permit and those outside the area can apply for a permit before entering the country. Businesses who take on expats have a legal obligation to notify the Department of Employment about any vacancies and appointments.The service industry employs the greatest number of foreigners in Luxembourg City, of which there are many, particularly from the neighboring borders. In fact, over 80% of employment opportunities in the country are from the services industry.

Expats in Luxembourg tend to find jobs in the financial sector (banking). Almost a quarter of Luxembourg’s total GDP is from this sector. For such a small country it is one of the largest financial centers across the globe. Working hours vary depending on the professions and industry, but most expatriates find work in top executive or managerial roles and for this the legal 40 hours of work/overtime conditions do not apply.

There is also a Code of Employment in French (Code du Travail) for employment and working conditions in Luxembourg. Employment contracts are stringent and follow the national labor laws. Some conditions include a minimum wage and salary increases every year, making the country a pleasant one to live and work in. Luxembourg is a tax haven, although this is not so for US or UK expats, who will find high income tax rates.

When securing a working contract in the country, the contract is usually written up in French. As an expat, if your French skills are basic or non-existent, it is advisable to ask for a translator to work on providing an English copy for your records.

For those with no accountancy or financial background, there are a number of other industries recruiting. These include chemicals, information technology and the ever-increasing tourism sector.

ADEM (Administration de L’emploi) is an employment service utilized by expats upon arrival in Luxembourg. They provide a comprehensive search for suitable positions within Government. EU Nationals will find a number of well-paid and highly respected positions in the civil service sector (knows as eurocrats). The reason for this is that Luxembourg is the administrative center for the EU, picked due to its accessible location (in the same way as Brussels is the centre of the governance).

In fact, the EU employs approximately 2,000 people in Luxembourg in agencies and organizations of governance/administration. However, as with any EU Government job, preference goes to those who can speak at least two languages. The more languages you can fluently speak and understand, the greater your chances of securing work with the Government offices. Popular languages for expats to learn include French and German (which will be useful for living in Luxembourg for everyday life), but also other languages such as Czech, Polish or Russian. There are a number of language courses available in the colleges of Luxembourg.

Luxembourg has not escaped the recent global economic crisis, although it has not suffered as badly as some other European countries. However, it is important to note that if you are a non-EU expat looking for work in Luxembourg, the employer must first prove that the position cannot be taken up by an EU national. This means that skilled labor is still in demand in certain areas of need and it is worth checking this beforehand. EU nationals are awarded many of the same rights of locals and there are a number of agencies able to assist the job hunting stages, as well as information in newspapers and libraries.

Mild weather, an abundance of leisure activities and varied cuisine makes Luxembourg a rising choice for expats; and the employment sector meets the needs of those moving to the country.