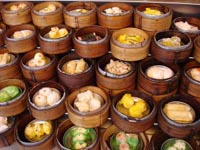 Spice trading in Malaysia goes all the way back to the 15th century and the country has continued its affair with spices well into modern times. Malaysian cuisine is a delightful fusion of flavors, with many overlapping gastronomic influences. It is not uncommon to find Thai curries, Chinese noodles and Indian gravy dishes in one menu. With the population being as diverse as its cuisine, living in Malaysia is bound to be an exciting adventure of tastes, textures and cooking techniques. Here are 5 Malaysian dishes you must try.

Considered to be the national dish, Nasi Lemak is one of the most traditional dishes of Malaysian cuisine.Although it is usually served for breakfast, it is eaten at other times of the day as well. Nasi Lemak consists of rice cooked in coconut milk or coconut oil. It is fragrant and creamy and usually served with accompaniments ranging from fresh cucumber slices, fried anchovies (ikan bilis) and a hot and spicy sauce called sambal. The most traditional version of the dish has a side of peanuts and boiled egg too. The Malay Indian variation is served with lamb, fish or chicken curry while the Malay Chinese variation sometimes contains minced pork sambal. You can even find a vegetarian variation that makes use of vegetarian mock anchovies instead of the dried anchovies. As part of a meal, Nasi Lemak is often eaten with other traditional dishes such as sambal sotong (squid cooked in chili paste) and ayam goreng (fried chicken).

Popiah resembles a fresh spring roll, but is made from a paper-thin crepe of wheat flour. The filling consists of turnips, either steamed or stir-fried, and cooked with other ingredients such as lettuce, carrots, French beans, fried tofu, peanuts and shredded omelet. A non-vegetarian version will usually have a filling of lightly seasoned stir-fried pork or seafood. It is served with a sweet bean sauce, hoisin sauce or chili sauce. In Malaysia (and also in China, Taiwan and Singapore), there is a tradition of ‘popiah parties’ where guests can walk up to the spread of ingredients and make their own popiah.

A blend of Chinese and Malay cooking styles, Laksa is a popular dish not just in Malaysia, but also in Singapore and Indonesia. The name Laksa means ‘10 thousand’, a reference to the numerous thin strands of vermicelli noodles used in the dish. There are two variants of Laksa – a tamarind-based fish soup called Asam laksa, and the coconut curry soup called Curry laksa. Asam laksa is usually made with shredded fish and thinly sliced vegetables with some sweet prawn or shrimp paste added on top, and is served with thick or thin rice noodles. Curry laksa uses cockles, shrimp, fish and bean curd as its main ingredients and is garnished with laksa leaf, also called daun kesum in Malay.

Rojak, meaning ‘mixture’ in Malay, is a type of local salad often served as an appetizer or an accompaniment to the main meal. Mamak rojak or Pasembur is popular among the Tamil Muslim population in Malaysia. It is an assortment of fried dough fritters, heard boiled eggs, bean sprouts, bean curd, cuttlefish and cucumber mixed in a thick sweet and spice peanut sauce. If you order fruit rojak, you are likely to get a mix of pineapple, jicama, cucumber, fried tofu and cut-up dough fritters with a dressing of sugar, chili, lime juice and shrimp paste. Penang rojak, a favorite in the Penang state of Malaysia, is made with a few extra ingredients such as guava, jambu air or water apple, squid fritters and honey served with a toffee-like thick sauce.

Summers in Malaysia are incomplete without Cendol, a sweet treat made with shaved ice, palm sugar, coconut milk and what appear to be green worm-like strands floating around in it. This is actually green jelly made from rice flour and the green coloring of pandan leaf. The palm sugar syrup, called gula, gives the dish a rich and distinctive flavor. Cendol may also sometimes contain glutinous rice, sweet red beans or creamed corn. The dish is served either in a bowl or a tall glass, in many small street side stalls across Malaysia.