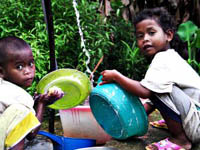 Expats moving to Malaysia may experience some amount of culture shock in the initial period of settling down. The good news is that Malaysia is a country with a diverse and multicultural society. The locals are also friendly towards foreigners and there are many modern amenities available, which would make expats from different parts of the world, feel quite comfortable. However there may be some aspects of Malaysian life and culture that may require a little extra adjustment.

Malaysian weather seems perfect if you’re on a holiday.It has an equatorial climate, which translates to heat and humidity throughout the year, making living and working here a bit of a challenge. If you’re used to an outdoor lifestyle at home, you may find that in Malaysia, people spend more time indoors inside air-conditioned offices and homes. It is advisable to allow your body to gradually adjust to the weather.

Malaysia is an assortment of ethnicities with the three primary groups being Malay, Chinese and Indian. There are also several other indigenous ethnic populations, each with its own cultural background and traditions. For those who are not familiar with these diverse customs and traditions, it may all seem slightly overwhelming at first. But this is also one of the most exciting aspects about a country like Malaysia. Exploring the food, festivals and lifestyles of new and vibrant communities can be an enriching experience.

Meeting and greeting each other respectfully is a significant part of Malaysian culture. Men usually share a handshake when they meet. Malaysian Muslim women may prefer not to shake hands with men. Some Malaysians may lower their gaze when greeting a person, as a sign of respect.

The concept of ‘saving face’ is an important part of Malaysian life. It helps to be aware of the type of situations that may cause someone to ‘lose face’. This can enable you to maintain better business and social relationships. For instance, criticizing a person publicly, even if you believe it is constructive criticism, may lead to a loss of face. Instead, provide feedback in private, on a one-to-one basis.

There is no official state religion in Malaysia. However, nearly half of its population is Muslim and Islamic influences are prevalent throughout the country. This is manifested in various ways such as the calls to prayer, which begins at five in the morning and takes place at four more intervals throughout the day. People dressed in slightly more revealing clothing may also receive some negative attention in the form of staring from the locals. Expats are not required to adhere to any religious traditions and there is complete freedom to practice one’s own religion. However, the locals appreciate it when their sensitivities are respected to some extent and just like anywhere else in the world, it is advisable to show respect for the local culture.

The official language of Malaysia is Bahasa Malaysia, a standardized form of the Malay language. But English is considered to be the business language and many Malaysians speak English fluently. Some of the other languages you are likely to hear spoken in Malaysia include Tamil, Cantonese and Mandarin.

Malaysians communicate in a subtler manner and they may avoid answering a question directly to prevent others from getting offended. Those who are accustomed to a more open and direct way of communication may require some time and patience to adapt to this.

Malaysian cuisine is a melting pot of cultures and expats will be spoilt for choice due to the sheer variety of options available. Chinese, Indian and Malaysian are the most commonly available cuisines and most expats coming from western countries may be familiar with them.

Malaysia has a good public transport system with a comprehensive bus network and modern railways. Taxis, on the other hand, may be unpredictable. While there are plenty of taxis available, many are very old and some don’t have basic safety amenities like seat belts. Some taxi drivers also refuse to use the meter, which is mandatory by law. They often cite reasons of the destination being too out of the way or heavy traffic on the streets. It is advisable to stand your ground and hail another taxi instead.