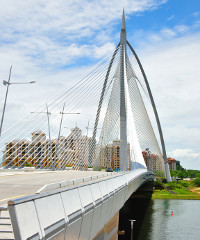 When comparing the respective lifestyles of Malaysia and Singapore, most individuals – aside from proud Malays – would probably admit that Singapore is more attractive as a cosmopolitan destination.

However, the clear winner in terms of cost of living is Malaysia: among the expenses associated with Singaporean life are rental prices that are more than five times the cost of those in Malaysia, grocery prices that are 79% higher than those of Malaysia, and overall consumer good prices that are 90% more expensive.

These, and other indices, add up to a situation whereby Malaysian purchasing power is almost 15% higher than that of Singapore.Urban Areas Near Singapore

We should naturally take a look at some of the southern Malaysian cities themselves, to see if they have anything desirable to offer – even if one is treating them as glorified bedroom communities while spending the majority of their time in Singapore, issues of safety, cleanliness and general peace of mind still must be considered.

There is a significant amount of urban buildup just across the water from Singapore, including the city of Johor Bahru (notable for being the southernmost city on the Eurasian continent) and Pasir Budang 35 km to the east of Johor Bahru.

As the latter is mainly an industrial area, it might be better to focus on the former, which is also closer to a major land bridge (if living in the shadow of refineries and fabrication plants is to your liking, though, absolutely check out Pasir Budang). Numerous Singapore-owned firms are already present there, and it is indeed a prime destination for those who wish to work in Singapore and thus take advantage of the superior Singapore dollar (generally worth more than twice the value of the Malaysian Ringgit).

Johor Bahru is also in fairly close proximity to the commercial township of Bukit Indah, where fans of Tesco and AEON hypermarkets can go to stock up on groceries and other goods. Judging by the community’s English-language Wikipedia page (which, as of this writing, is bravely defying moderators there by being breathlessly written in clear ‘advertising’ language by a mystery supporter of the community), locals are eager to posit this as a “luxury” alternative to Singapore, blooming with executive suites and fine dining options. So, it seems eminently possible for a West Johor resident to enjoy those things more exclusive to Singapore – e.g. bustling nightlife – while enjoying daily amenities in Malaysia at a lower cost.

Going even further west, our same mysterious yet benevolent Wiki-guide advises us to look into Gelang Patah, which “significantly change its color from a shantytown to a town of opportunity as it is flooded by foreign companies, foreign forces and expatriates”. However, both expatriates and locals on fora dedicated to expatriate living in Malaysia seem either indifferent to the area or honestly know little about it. Further digging reveals it to have something of an admirable ‘improvisational’ entrepreneurship to it, with one Gelang Patah native offering his house for use as a local car wash.

Staying on the Safe Side

Naturally, it is going to be difficult to beat the ease of “walking from one side of the city to the other” that follows from Singapore’s infamous low crime rate. It is almost unfair to compare areas like Joho Bahru to this. Even though many of the local crime stories have a whiff of “urban legend” to them (such as the tale of a house burglar / home invader who gained entry by methodically removing the roof tiles), the existence of such wild examples suggests a city where one should exercise all the same cautions that are exercised in European or American cities (staying on main roads while driving at night, keeping valuables away from public display, and so on).

One obvious feature of such an arrangement is that regular commuters will be making daily land crossings at the Tuas Customs / Immigration checkpoint. The ease of accomplishing this regular crossing will be helped by having a permanent residency status in Malaysia, which will mean a speedier trip through the lines (of which there are reputedly fewer for non-Malaysian residents). As stated elsewhere on this site, there are some border crossing etiquette breaches that you may be committing without knowing it, so plan ahead: one of the more notable is the requirement to always leave Singapore with a ¾ full tank of gas.

Meanwhile, those who are familiar with the intense automobile traffic in the country (exacerbated by events like the mass exodus from Kuala Lumpur to the countryside during national holidays) may recommend against this type of lifestyle: if, for no other reason, because of the rather notorious local reputation for traffic accidents and happy disregard for proper use of the ‘slow line’ or the red ‘stop’ light.

While a Malaysian residence may grant you some exemption from the higher Singaporean cost of living, the mental toll of the daily commute and the not-to-be-dismissed possibility of ending up in a costly accident might ‘even things out’, as it were. The good news is that, if you are as close to Singapore as Johor Bahru, there will be other options for commuting in addition to car travel.