Why Moving To Malaysia Will Bring You Better Career Satisfaction

Getting an offer to work in another country is bound to be a very exciting prospect. It could give you the chance to boost your profile, realize your ambitions, and build a new life for yourself as well as your loved ones. However, it is important to remember that adjusting to a foreign place isn’t always a great experience, personally and professionally.

Potential employees prefer moving to certain locations as the working conditions are said to be much better. According to a survey conducted by HSBC, some of the Asian countries that ranked quite highly with expats in terms of economy and career opportunities include Singapore, the UAE, Hong Kong, China, India, Indonesia, the Philippines, and Malaysia.

For more than a decade now Malaysia has been experiencing a significant rise in its number of expats, primarily from Europe, North America, Australia and other Asian nations. This is mainly because multinational companies see it as an emerging market for products and services. Operational costs here are relatively low too. Some of the industries that are currently undergoing a boom include finance, education, telecoms, construction, information technology, tourism and hospitality. Qualified and experienced expats can also find well-paying jobs in the manufacturing, banking, accounting, insurance, real estate, and oil and gas industries.

However, it is imperative that you have the required qualifications and paperwork, along with at least some experience, before seeking a job. If you are planning to take up a job or an assignment in this country, read on to find out why moving to Malaysia will bring you better career satisfaction.

More than 50% of the expats living in Malaysia state that their jobs have become more fulfilling after relocating. This is mainly because they get more adept at handling a wide range of different situations and challenges at the workplace. At least half of foreigners get a lot of exposure to novel concepts and end up learning new skills while working here. Many of them see faster professional growth in this country or when they return home after completing their assignment. 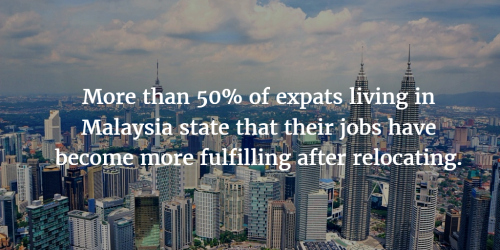 About 19% enjoy working because they find it quite easy to fit in with their local counterparts. Also, around 21% are quite happy with their bosses and feel that their input is valued. Another factor that increases job satisfaction among expats is that workers treat one another with a lot of respect. This also applies to foreigners in leadership or managerial positions.

Fortunately, the behavior and etiquette followed in the Malaysian corporate environment is quite similar to most Western countries, so you don’t need to prepare for any major culture shock.

HSBC’s research indicates that the percentage of expats sent to Malaysia for work is 28%, which is much higher than the global average of 16%. It also highlights that most employers take several measures to ensure that their staff members are well taken care of during their stay.

The remuneration for foreigners is an average of US $109,000 (£76,750, €96,615, MYR 425,150) per annum along with many contractual perks such as annual travel expenses, accommodation, conveyance, education fees (in case of children), healthcare, and medical allowances to name a few. Expat salaries in this country are well above the global average.

According to the research, 73% of foreigners working in Malaysia get health and medical benefits, which is much higher than the global average of 52%. Similarly, about 45% receive an annual allowance for visiting home (as compared to 33% in other countries) and 42% receive compensation for shipping their personal belongings. 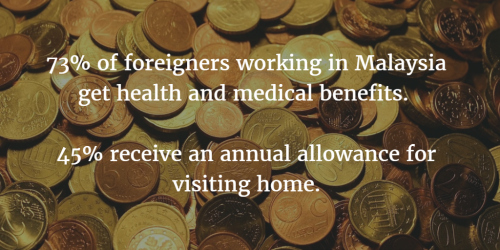 However, these figures may vary, depending upon an individual’s qualifications and experience.

There is a lot to see and do for people of all ages in this country. The good thing is that most foreigners manage to maintain a proper balance between their personal and professional lives.

According to the Malaysian Employment Act, the work week has been defined as 48 hours. The locals work for about 8 hours a day, usually 6 days a week. Several multinational organizations allow their employees to work 5 days a week instead. Normal business hours are 9:00 AM to 5:00 PM though this may vary depending on the industry you work in. While the law provides only 10 days of vacation each year, you’ll enjoy several days off during the year as there are a large number of public holidays. You are also entitled to 14 days of sick leave in a year.

A majority of working foreigners believe that they get to spend more time with their families, friends and loved ones after having moved to Malaysia.

About 62% of expats claim to make friends easily and 72% say that their social life is as active as it was back home. While 43% of them believe that their relationship with their partners has improved after moving, 15% state the opposite. Keeping in touch with people in their home countries is also easy, as the communication facilities in this nation are on par with international standards. 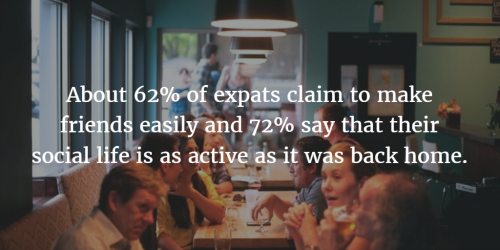 Around 63% of expats working in Malaysia have stated that they enjoy a much higher disposable income in this country than they do at home. They have the time as well as the resources to lead a more active social life.

Though Bahasa Malaysia, or Malay, is the official language of the country, there are more than 100 other languages spoken by people of various ethnicities. Fortunately, English is widely spoken and understood. It is also considered the main language for business.

While learning a new language may be fun, it is not imperative that you pick it up in order to communicate with your colleagues, clients and stakeholders. Mastery over any language in addition to English is considered an added advantage at work.

Acquiring work permits for foreigners can be quite a challenging and time-consuming experience. Fortunately, getting a visa renewed is fairly straightforward. Make sure that the organization you decide to join gets all the paperwork arranged for you.

Moving to Malaysia is likely to be an enriching experience for you in more ways than just professionally. Apart from better career opportunities, some of the other benefits of living in this nation include the following.

The locals usually can’t stop complaining about how expensive Malaysia has become in the last few years and this is only expected, considering the number of foreigners that have moved here. However, most expats find the cost of living in this country very low, especially in comparison to places like the US, UK, Canada, Australia, Germany, Singapore and Hong Kong.

Malaysia is like a melting pot of several different cultures and ethnicities. It is easy to find people of all nationalities here, especially in the capital city of Kuala Lumpur. The three predominant cultures include Malay, Chinese and Indian. The best part is that there is little racial discrimination experienced by outsiders. You can fit into expat communities and into the local society without too much difficulty.

There is no doubt that the infrastructure in Malaysia is world-class and some of the most developed in Asia. People have access to an excellent network of roads and railways.

Most families based in this country have at least one vehicle. Of course, this means clogged roads during rush hour. Fortunately, commuters can avoid heavy traffic by using the toll roads. The Touch-n-Go cards for these roads are easily available at toll kiosks, gas stations and touch-n-go hubs.

Taxis are plentiful, especially in the capital city. Since they charge a fairly low rate, people rent them for several hours or even a day when they go sightseeing.

Kuala Lumpur also has a light rail line, which is used by locals, tourists and expats. This has helped alleviate traffic problems to a great extent. The government has built a nonstop, high-speed rail line to and from the airport. Traveling by air-conditioned trains is a pleasant experience since they are well-maintained and quite reasonably priced.

It is very easy to get a live-in or part-time housekeeper and cook in this country. A majority of the locals and expats have at least one part-time maid to help them with the housework. This number is likely to increase if they have children, since there are no daycare facilities.

It is always best to hire a housekeeper through recommendations and check their paperwork beforehand. There are a number of reliable agencies that will understand your requirement and suggest a maid accordingly, for a small fee.

Expats living in big houses often employ gardeners on a part-time basis too. Though the service of a personal driver is rarely required, it is very easy to find one, either on a permanent or temporary basis.

Many nations are known to have decent private healthcare but poor public healthcare. Fortunately, Malaysia excels in both sectors. This is why medical tourism is booming across the country, with the main areas of interest being dentistry, cardiology, ophthalmology, gastroenterology, orthopedics, general surgery and plastic surgery.

According to several surveys, the healthcare system in this country is among the best across Asia. In fact, it has outranked places like New Zealand, Spain, Ireland and Italy. The success of the system can be attributed to the expertise of the practitioners, the range of options available, and its affordability. Even those who do not have medical insurance find it easy to pay out-of-pocket expenses for standard procedures.

In the last few years, the focus for Malaysian healthcare has moved from traditional medicine to modern, Westernized practices. The government has made provisions for a wide network of medical facilities in most areas.

Even the doctors that belong to the public sector have completed at least some part of their training overseas and are therefore fluent in English. Getting an appointment with specialists like dentists and therapists is also not a challenge.

While there is no national healthcare scheme in this country, the government has made it mandatory for foreigners to have medical insurance as a part of the Foreign Worker Hospitalization and Surgical Insurance Scheme.

Malaysia, and mainly Kuala Lumpur, is known as a gastronomical hub of the continent. Almost all foreigners who visit the country absolutely love the local food. Restaurants usually serve a wide range of Malaysian, Indian, Chinese, Japanese, Indonesian and Thai cuisine. The more adventurous visitors also frequent the “hawker stalls”.

On the downside, while there are numerous restaurants serving Western food, only a few manage to get the taste right. Fortunately, you can head to one of the many international food chains if you are not too keen on trying the local flavors.

Have you lived in Malaysia? Share your experiences in the comments!