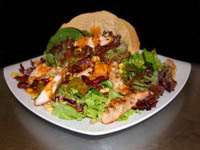 Food is an integral part of Mexican culture. Mexican cuisine bears several influences from other countries over the years and even today it retains its unique cultural characteristics, while steadily adapting to and exploring innovations in cooking methods and flavors. The restaurants and street stalls in Mexico are storehouses of delicious and exciting dishes and here are five such foods you don’t want to miss out on.

Chilaquiles are a traditional Mexican food and consist of lightly fried corn tortillas triangles, topped with salsa or mole, which are simmered until they soften.Scrambled or fried egg and pulled chicken are thrown into the mix and the dish is topped with cheese or sweet Mexican cream. A serving of refried beans usually accompanies Chilaquiles. There are several variations of this recipe and each region, even each family, is likely to have their own unique version of Chilaquiles. While the dish is commonly cooked to soften the tortilla chips, in central Mexico they are left crisp by adding the salsa at the very end just before serving. This variation also features garnishes of avocado and raw onion rings. Chilaquiles make for a great breakfast or brunch food.

Mole refers to different types of quintessentially Mexican sauces. Making mole can be arduous process considering there are above 20 ingredients that go into it. You can be sure that Mole will be on the menu at nearly every Mexican celebration. It is especially popular in central and southern Mexico, although most regions have their own special variation. Some of the common types of mole include the famous mole poblano, which originates in the Puebla region and is considered to be the national dish of Mexico. There’s also mole negro from the region of Oaxaca, known for its dark appearance due to the addition of the Hoja santa plant. Oaxaca is also the birthplace of the mole verde, a type of mole made with toasted pumpkin seeds, tomatillos, lettuce and cilantro.

These steamed packets of corn dough with savory or sweet fillings actually have their origins in Aztec and Mayan times. Unlike tamales served in most Mexican restaurants around the world, the ones in Mexico are prepared simply and served plain. There are numerous different varieties of tamales and each uses a certain type of corn dough or masa. Tamale fillings can range from beans and pumpkin seeds to chicken and hard-boiled eggs. In the Michoacán region of Mexico, you will find a special type of tamale called corundas, recognized by their triangular shape and steamed in long green corn leaves. In the Yucatán region, you have vaporcitos, made by smearing thin layers of the masa on banana leaves. In Culiacán in the Sinaloa region, vegetarian tamales are rather popular. These come with fillings of different vegetables, beans, corn and even pineapple.

A traditional stew-like soup, Pozole is made of hominy and some type of meat. Hominy are dried maize kernels that are soaked in a solution of lime. A large-kernelled white corn found in Mexico, called maize blanco, is traditionally used to make pozole. The dish is stewed for hours until everything is thoroughly cooked. It is served in bowls and then ingredients such as radish, onion, lettuce, lime juice and oregano are added on top. Pozole can be made either as a clear broth or as a spicy green or red soup.

Translated as drowned sandwich, torta ahogada hails from the Mexican state of Jalisco. It is also commonly eaten in others parts of the country. Torta ahogada is either partially or completely submerged in a sauce made with chile de árbol, a type of dried chili pepper. There are also variations with milder sauces made from red tomatoes. A partially drowned Torta ahogada is called ‘media ahogada’ and a well-drowned one is called ‘bien ahogada’. The sandwich is made from birote bread, which is soft in the middle with a thick and crisp crust.

The texture of the bread allows the sandwich to absorb the sauce without disintegrating. Torta ahogadas usually contain fillings of fried pork or chicken. Eating a Torta ahogada can be a messy affair, yet it is best enjoyed when eaten with bare hands.