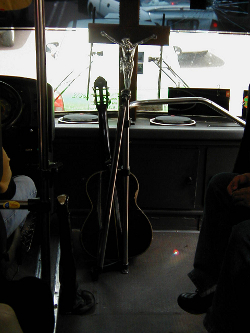 I’ve observed that Mexican music falls into two classes. One is very, very good; the other is so horrible that it could quite possibly induce a nervous breakdown or at least a brain tumor after forced, prolonged exposure. Listening to too much of the latter could be hazardous to your health.

The orchestra here in Guanajuato is one of the finest I’ve ever heard, and I listen with a critical ear. I was a music major at the university many decades ago. I majored in voice performance and music theory.

I’ve often been moved to tears of joyous rapture listening to some of the finest vocalists and instrumentalists ~ all Mexicans. But the most exciting thing is to see how many locals show up at the concerts. The symphony is big here. I love that.Mariachi is also big here. In the city of Guanajuato, you will see some very traditionally dressed Mariachi bands in El Jardin (the main plaza). There will be several of these bands playing all at once for different groups of tourists who are eating in the restaurants or sitting on the benches. This results in what I call “The Mariachi Screech.”

Playing instruments that are in tune and singing in the same key as the instruments does not seem to be a high priority with Mariachi bands. This, of course, results in an interestingly incomprehensible cacophonous roar. But, amazingly, people pay these guys to sing at their tables. It makes me wonder just how that affects their digestion. I can only speculate.

Another form of music is what I call “The Bus Musicians.” I can’t think of anyplace in the States where there is anything like this. Decades ago, when I traveled in New York and Philly, I saw a lot of sidewalk performers with open instrument cases or hats where you could drop a buck or two but I never saw any Bus Musicians.

Bus Musicians are people with guitars (or some other “instrument” ~ sometimes nothing more than a comb and a tin can ~ go figure!) who board the bus ~ no matter how crowded ~ and start wailing like a cat that is being tortured horribly. The guitar sounds as though it has never been tuned. The singer sings like he has needed to move his bowels for a terribly long time. Then, after he has finished his torture chamber musical number and has tortured all the passengers, he starts demanding money.

These “musicians” ask for money and people actually pay them. This, of course, simply reinforces the behavior of taking captive an entire bus load of helpless bus passengers who just want to get from point A to point B, and forcing them to endure what doesn’t even come close to passing for music. I think they should be dragged away and beaten, but no one ever asks me for an opinion about anything in this town.
And, I am talking about those who pay money to the so-called musicians and not the Musical Inquisitors who dole out the agony.

Here is an additional benefit about the Bus Musicians that I cannot forget to tell you. When the bus is full (as is usually the case), you, the passenger, will be afforded the distinct honor of getting cold-cocked by the guitar as the “musician” engages in his Songs of Death. You also might have the privilege of a nice shower of spittle from the more radically rowdy spewing lips.

There is one guy, though I’ve yet to see him on the bus offering his version of tormenting people, who is worth mentioning. He offers a really special treat. Though I would not normally understand one word spoken from his caterwauling mouth, I understand him because he sings some of The Beatles’ greatest hits. Even though he hacks on an out-of-tune guitar and sings off-key, I can recognize The Beatles. The horror is that he sings the songs in English.

His performing venues are the parks and plazas. He sits with his back to one of the many beautiful fountains. He has the “Jose Feliciano” look going for him, which accompanies his horrendously frightening singing.

The other day, he was butchering “I want to hold your hand.” It came out something like this:

He began screeching and convulsing to such an extent he made women swoon with the vapors, made children cry, dogs faint, and shopkeepers come running out expecting to find someone being murdered.

His special musical number, however, is the song “Twist and Shout.” His version sounds something like this:

Do you see what you are missing here in Guanajuato, Mexico?