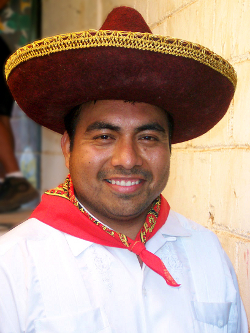 Let me begin this next column in the series with a generalized statement:

The Spanish you learn in a classroom in the United States, Mexico, or in your own study from some impossibly expensive Spanish language tapes WILL NOT be the Spanish you hear in the streets of Mexico!

I do not care who will try to convince you otherwise! I do not care who may convince you that this method or that method will give you fluency if only you would dish out the bucks to take it. What you learn in a classroom will not be the Spanish you hear on the streets in Mexico.You will not hear classroom Spanish in the stores, markets, doctor’s office, from street vendors, church, or any life event that happens outside the classroom. You will not! I know this for certain because I took a load of classes in the U.S., Mexico, and a lot of studying using one of the most expensive language learning home study courses. And what I learned was not anything close to what I hear in real life in the streets.

This is a dilemma. This, in fact, borders on the criminal, does it not? If what you will learn in class in the U.S., some ‘immersion course’ in Mexico, or from some home study that promise you will speaking Spanish in 45 days, doesn’t do the trick, then haven’t you wasted you money? In my view, ‘you bet it does’.

You could take 4 semesters of Spanish at the local Junior College, then come to Mexico to take 4 months of something erroneously labeled, ‘Total Immersion’. Though this is a lot of Spanish, you will at best be able to form sentences and ask questions but you will NOT be able to comprehend the reply.

Mexican nationals do not speak the way you will hear Spanish spoken in a classroom or expensive language tapes!

And therein lies the rub.

The daily ‘street Spanish’ is so peppered with idiomatic expressions that you will hardly, if at all, be able to comprehend what is said to you! You will hear some recognizable words and phrases but will not be able to understand them in the context in which they are offered.

Here are some examples:

In a formal classroom you are taught how to greet someone like this:

The reply you are taught to say in a formal classroom is,

Estoy bien, gracias. – I am fine, thank you.

However, here is what you could hear on the streets of Mexico:

Como mango pero no chupado. – Like a mango but not sucked.

Mango is a fruit here.

Can you guess what this means?

Comosta is a made up contraction for, Como esta? And the phrase, ‘Como mango pero no chupado’ roughly means,

‘I am like a pretty and sweet mango but not all sucked dry, wrinkled, and ugly.’

What I was told was told that means is that the popular fruit mango is beautiful looking and sweet but once it is all the meat and juice is sucked out of it then it looks ugly, becomes tasteless and should be thrown out.

Now, tell me this: Have you, in all the Spanish classes you’ve taken, ever heard of that? And yet, I hear it on the street! This is just one example of about a million idioms that Mexicans use every single day on the streets. It isn’t the same Spanish!

Then, there is the speed at which Spanish is spoken. Man alive, they are fast!

I know some people who came here from other parts of the Spanish-speaking world. I know some from South America who have told me that it took them a while, after they moved to Mexico, to understand exactly what language the Mexicans were speaking!

For reasons I cannot explain, Mexicans seem to feel the need for speed! If you listen to the various Spanish-speaking radio stations you can access via the web, not all is equal in the Spanish-speaking world. In Spain, the accent aside, they can be understood well. So can those from Argentina. Some may disagree with me but other than the Cubans, Mexican Spanish is mostly incomprehensible because of the speed and idiomatic-expression factor.

Frankly, I do not know if I will ever be able to understand Mexicans on the street well enough to hold a street conversation.

Don’t get me wrong. I can have a decent conversation with someone who is well-educated and who speaks more formally. If you go to the doctor, you can hold a conversation because they will, more than likely, speak to you in the Spanish you learned in the classroom. Go to a party with a bunch of college kids talking about issues and you will hold your own. But, go into the streets and try talking to a street vendor and, ‘KA-POW’! What language is this guy speaking?

I asked a Mexican pal who lives in Vallarta how he learned his English. His response was, ‘In bed’, while pointing to his American wife.

That is exactly how most of the truly bilingual young people here become fluent. They know, in fact are told, that if they want to become fluent: GET A MEXICAN BOY OR GIRL FRIEND. And, that is exactly what they do. They hook up with a mate and that is how they become fluent in ‘Street Spanish’.

For you American men reading this column: Don’t even think what I know you are thinking!