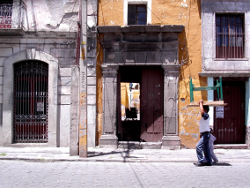 I cannot say whether walking the streets of all Mexican cities is the same. However, I can say to walk the streets of Guanajuato, my adopted town, one immediately becomes aware of two items. One, the reason the Spanish pitched fits trying to plan the layout of this town and two, why Guanajuanteses (citizens of Guanajuato) walk fast but get nowhere on time.

The Spanish, being the good, anal-retentive Europeans we’ve all grown to know and love, were accustomed to building their cities in grid-like patterns. You know what I mean. Most of America, having inherited this same anal retentiveness from our European ancestors, is built on the same plan. To make it easier to find addresses (I suppose), cities are built in a grid. One finds the numbered streets going one way and the named streets crossing them.Well, Guanajuato’s topography was not exactly amenable to this type of city planning and development. Trying to apply the Spaniards’ city planning to Guanajuato didn’t work. To put it in terms that Americans might more easily understand, imagine the Grand Canyon.

If you’ve been to the Grand Canyon, have taken the little mule ride down to the bottom of the canyon, and then looked up, you will get a good idea what Guanajuato is like. When the Spanish set about harvesting Guanajuato’s silver, they found the area was a giant ravine winding its way through a series of mountains. The topography made their modern city planning ideas impossible to carry out.

The mountains in this unique Colonial Mexican town form a jagged-shaped bowl with the city streets running along the bottom of the bowl. City buildings line the bottom of the bowl (the ravine) as well as climbing up the sides of the bowl. It is actually an incredible sight-one of which I never tire. Somehow they managed to build this city up the sides of these mountains. It makes one wonder in amazement just how they did it.

This of course vexed the Spanish to no end since it made it impossible for them to lay out the city in the usual grid of which the Department of Post Middle Ages City Planning and Imperialism was so fond.

If you want to experience a little of what the Spanish must have felt, just come to Guanajuato and try to navigate the streets. Better yet, try doing it with the map you can get at the Tourism Office. You have to give the city credit for trying, but trust me on this. Even with the map the city provides to tourists, it is as impossible to find anything in this town as it was in the days of the Spaniards. Only more so because there is far more to this town than when they built it.

Guanajuanteses seem to know where they are going. If you can get someone to show you, you might be able to get to where you need to go. The maps do not work and the street names are subject to changing suddenly without notice. Also, the locals walk at the speed of light; so getting someone to show you where you are trying to go can be dicey at best.

What confuses me about all conveyances in this town applies as well to the locals walking the streets. They seem to be going somewhere in a tearing hurry. But rest assured, the goal is not to arrive at their destination on time. A friend offered a possible answer.

‘They must all be late for something and are therefore walking (or driving a bus, cab, or car) at the speed of light to get there.’

This is the most reasonable explanation for the mystery that I have yet to unravel. Most likely, I never will solve it. Make an appointment with most Mexicans and one of the following scenarios will occur:

Rest assured. They are on the streets of Guanajuato rushing to board the bus, to take a cab or bus which is being driven at warp speed, or walking faster than you can imagine is humanly possible to get somewhere fast but never on time!