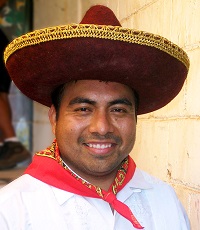 Although people across the world tend to view mariachi music as definitive of Mexican folk music, the country has a much richer and wider range of traditional musical styles. Even mariachi itself has a much wider range than the popular characterization of it, which tends to be a simplification and stereotyping of modern mariachi, ignoring the style’s rich history and its modern variations. (Early mariachi bands used only violins, guitars, and harps, and did not wear the iconic charro suits we know today. The suits, the adoption of instruments such as trumpets and accordions, and the incorporation of European styles such as polkas and waltzes happened only later, and modern mariachi bands continue to experiment and stretch the boundaries of the style.)In addition, there’s ranchera, corrido, son, and other related and overlapping styles, most of which have evolved through a complex, unique, and delightful mingling of pre-colonial local music, Spanish folk and classical music, and African folk music.

For anyone who has enjoyed the little Mexican music they’ve stumbled upon – or for the expat who wants an introduction to the rich musical heritage of their new home – here’s a short list of traditional folk artists who are worth checking out.

• Mariachi Vargas De Tecalitlán: This mariachi ensemble was founded over a hundred years ago, in 1897. Since then, the group has of course seen many generations come and go, and has been an integral part of Mexico’s history, playing at the presidential induction of Lazaro Cardenas in 1934 and taking on the role of Mexico City’s official mariachi band for 20 years. They’ve had regular as well as one-off collaborations with a range of artists, including Mexican greats like Jose Alfredo Jiminez and Juan Gabriel, and American pop and country singer Linda Ronstadt. In terms of both instruments and styles, Vargas De Tecalitlán has an exceptional record, being early adopters of the trumpet and violin, and playing an eclectic range of music, from traditional mariachi to classical music to more modern, experimental sounds.
• Pedro Infante: Like several other Mexican musical icons, Pedro Infante was both a singer and an actor. However, Infante was not just any actor, but one of the greats of Mexico’s Golden Age of Cinema. He sang scores of traditional ranchera and bolero songs (often with his own characteristic mariachi shout, and often backed by none other than Vargas De Tecalitlán), as well as more modern styles such as the cha-cha-cha and the waltz. Tragically, Infante died in a plane crash at the age of only 39.
• Jorge Negrete: A close friend of Infante and a public rival, Negrete was another hugely popular actor-singer. Along with Javier Solis (a third iconic actor-singer whose music is well worth exploring), they were known as “the three Mexican roosters” (Tres Gallos Mexicanos). To date, the best known recording of what is essentially Mexico’s unofficial anthem, México Lindo y Querido, is the one by Negrete. Sadly, the three “roosters” all died young, Negrete dying of cirrhosis from hepatitis at the age of 42 and Solis dying from surgical complications at only 34.
• José Alfredo Jiménez: Jiménez had a short but prolific and brilliant career, writing over a thousand songs, including many rancheras that today are popular classics and have been recorded by scores of artists both within Mexico and in the rest of the Spanish world. In addition to his remarkable output as a writer, Jiménez performed too, forming a trio with his brothers and collaborating with Infante, Negrete, and Vargas De Tecalitlán, as well as with other contemporaries.
• Concha Michel: For those who know Frida Kahlo well enough, Concha Michel’s might be a familiar name. Although not as well known as the other artists on this list, Michel is nonetheless a Mexican cultural icon. A rare female corrido performer, she was also a songwriter, playwright, folklorist, and political activist, with strong views on the rights of women, indigenous people, peasants, and workers. Michel was deeply inspired by the ideals of the Mexican revolution, and the themes of communism and socialism run through much of her music, along with stories of the revolution. (Michel, fortunately, lived a long and productive life, passing away only relatively recently, in 1999, at the age of 93.)