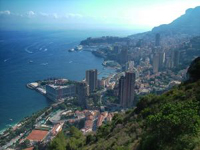 Monaco has a varied restaurant scene with establishments serving up cuisines from around the world. Being the wealthy destination that it is, many of the country’s eateries are Michelin-starred, sophisticated up-market hotspots. Here are 5 great restaurants in Monaco that expats must visit.

Top chef, Alain Ducasse, is the owner of Le Louis XV. This is a hugely popular restaurant at the Hôtel de Paris in Monaco known as much for its grand interiors as for its fine food. Le Louis XV holds three Michelin stars and has regularly featured in lists of the world’s best restaurants.The fare is Mediterranean and seasonal and includes specialties like Mediterranean sea bass with fennel, radicchio and citrus fruit; and breast of squab from the Alpes-de-Haute-Provence region, grilled polenta, and jus thickened with giblets. The menu is complemented by an impressive wine list as the restaurant’s wine cellar has more than 400,000 bottles of wine. The service is exceptional and the staff always looks sharp in their custom-designed elegant uniforms. The restaurant’s interiors mimic the grandeur of a Versailles palace with chandeliers, marble columns and intricate carvings. The sparkle of gold is everywhere and even the crockery is gold-plated. An interesting feature of the restaurant are the clocks, which all seem to have their hands paused at 12 o’clock.

Joël Robuchon is the main restaurant at the Hotel Metropole in Monte Carlo. Featuring an open kitchen, a trademark of French chef Joël Robuchon, the restaurant’s menu offers sophisticated Mediterranean cuisine under the guidance of Head Chef, Christophe Cussac. The ambience of indulgence begins in the driveway itself, which is lined by a row of parked luxury cars. The interiors are elegant at this two-star Michelin restaurant. The lobby with a huge central skylight leads to a bar with bookshelf-lined walls. Cleverly hidden behind one of the bookshelves is the door to the washrooms. A sushi-style bar surrounds the open kitchen and guests can enjoy direct contact with the Chef while he cooks. Specialties at Joël Robuchon include foie gras mousse, salted caramel and Parmesan served as an amuse-bouche; and caviar with crab and shellfish jelly, which is served in an elegant little tin bearing the restaurant logo.

This is considered to be among the more moderately priced restaurants in Monaco. Run by the same family for nearly 40 years, U Cavagnetu means ‘picnic basket’ and the menu lets you choose from a variety of regional dishes such as barbajuan, an appetizer consisting of deep fried pastry filled with spinach, Swiss chard, chopped meat, rice and egg; and beignets de fleurs de courgette or fried zucchini flowers.

There’s also the pizza-style bread from France called pissaladière and socca, a flan made with chickpea flour. The interiors are intimate and customers include both locals and tourists. U Cavagnetu offers guests the option of indoor seating as well as outdoor seating on a shaded terrace.

As the name suggests, this place sports interiors done up in classic French brasserie style. Brasserie le Café de Paris is located on the Place du Casino and is reminiscent of the charm of old Monaco. The ambience is lively, yet glamorous and the place is a popular haunt with expats. The specialties on the menu rotate according to the seasons and the restaurant remains open from breakfast until late at night. Chef Jacques Lambert offers an assortment of seasonal seafood dishes and there’s also a great selection of drinks and cocktails. Especially interesting is the ballet-like movement of the waiters who glide by holding aloft plates of food, in true brasserie style.

This restaurant can be quite difficult to find as it sits amidst shops just off the main square in Place du Palais. It opened its doors in 1953 and was run by the Bonafedes, a respected family of the region. It continues to remain in the family till date and carries on the tradition of incorporating fresh local produce into simple, flavorful dishes. Castelroc has on offer a range of local specialties that you may not find in most of the French and international restaurants in the country. Apart from the Monégasque favorite of barbajuan, there’s also the national dish of spiced stockfish.