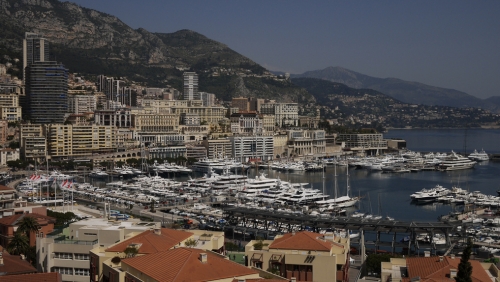 Monaco is often considered one of the best places in the world to live. It lies on the Mediterranean coast, between the French and Italian Rivieras, and is soaked with 300 days of sunshine every year. It is also close to the Southern Alps, allowing visitors and residents easy access to the ski slopes. The population of Monaco represents approximately 108 different nationalities.

We asked Aiste Miseviciute of Luxeat about the most challenging aspect of eating out in Monaco.“Considering the size of the country, I think the choice of restaurants in Monaco is quite good. Having said that, if you don’t want to spend too much on your meal, finding a nice place that will not blow your budget can be a challenge there…”

So, how do you go about choosing where to eat in Monaco?

Monaco’s cuisine bears French and Italian influences and the daily eating habits of the people show a distinct Mediterranean character. Fresh produce is widely available and since the region lies close to the sea, fish features in many local recipes. Many world-renowned chefs have opened their restaurants in Monaco. The eateries here vary in terms of pricing and no matter what your budget, it is easy to find good restaurants that serve excellent fare. Here is a short guide to eating out in this Mediterranean paradise.

Monaco has quite a few luxurious, Michelin-starred restaurants. The fine dining experience at these places comes at a steep price, but you can expect some exceptional fare prepared by the world’s top chefs.

Le Louis XV – Alain Ducasse
Monégasque chef Alain Ducasse opened Le Louis XV in 1987. The restaurant has won three Michelin stars and many chefs who trained here went on to start their own Michelin-starred restaurants. At Le Louis XV, guests can expect an opulent culinary experience. The interiors are grand and elegant, the wine cellar has nearly 400,000 bottles of wine, and the service is meticulous. Le Louis XV is located at the Hotel de Paris Monte-Carlo, Place du Casino.

Restaurant Joel Robuchon
This eponymously named restaurant was started in 2004 by chef Joel Robuchon. It has open kitchen where guests can watch the food preparation. The interiors are refined and the menu features delectable dishes such as asparagus mimosa with caviar, seared foie gras with garden peas and sea bass steak with broad beans.

Le Vistamar
Le Vistamar is a delight for seafood lovers. Head chef Joël Garault serves up original fare where fish is always the star. While you sit at the terrace and take in some spectacular views of the Mediterranean waters, you can feast on some fantastic dishes like blue lobster served with foamy garden peas. The varied wine selection serves as a perfect complement to the food.

Brasserie le Café de Paris
Located at Casino Square, next to the Hotel de Paris, this is a hugely popular brasserie that represents the old world charm of Monaco in the 1900s. The ambiance is one of subdued glamour and the dishes on the menu rotate according to the seasons. Open from breakfast until well into the night, it is a great place to unwind with friends over cocktails and seafood appetizers. It’s also an excellent place to catch some breakfast while sitting outside on the terrace. The place is popular among locals, first-time visitors and expats alike.

And what about for the more stringent budget?

Not every eating out experience in Monaco has to burn a hole in your pocket. There are some inexpensive options too, which are mostly found away from the more touristy destinations like Casino Square and Port Hercule. At Rue Terrazzani there’s Pizzeria Monegasque, an affordable eatery that makes full-sized pizzas baked in wood-fired ovens. There is also L’Epi d’Or at Rue Grimaldi, a bakery that serves baguette sandwiches, tarts and cakes.

Cosmopolitan also merits a mention. This multicultural restaurant is moderately priced and offers an array of Asian-inspired dishes, all bearing the hint of Mediterranean flavors. It is open throughout the day and the comfortable atmosphere and generous portions make it one of the most popular restaurants in Monaco.

Another great way to eat out in Monaco and still save some money is to take advantage of the set menus. These are usually available in the evenings, and sometimes also at lunchtime. You can have a nice two-course meal at the Restaurant St Nicholas or a three-course meal of homely fare at U Cavagnetu.

If you’re on a really tight budget or just looking for a quick bite to eat, drop in at any of the supermarkets and choose from a selection of sandwiches and salads. Happy hours at bars also provide an opportunity to save some money. The prices drop considerably between 5pm and 7.30 – 8.00pm.

A few final words of advice from Aiste, for anyone who is thinking about moving to Monaco:

“Monaco is a pleasant place to live because of the great Mediterranean climate, but if you seek something more cultural or nature-wise, be prepared to trek outside of Monaco.”

Have you lived in Monaco? Where were your favourite local haunts and places to eat? Let us know in the comments.