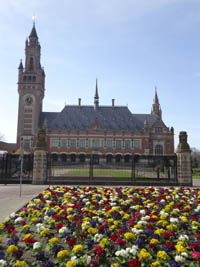 Life has taken many turns but it’s all led to where I am now, a writer and American expat living in the Netherlands. This adventure was a long time coming, and began three years ago when my husband took a position with an international organization here in The Hague. We came when our son was in high school and our daughter was in middle school, but now find ourselves parenting across continents and time zones: she continues at the international high school here but he’s graduated and back in the US attending university.

Ever since childhood I’ve been fascinated by international events, wanting to travel far and wide, see the world and experience new countries and cultures. A turn living in Mexico during college only whetted my appetite for more, and I made it my career. Along the way I met and married an Adult Third Culture Kid who grew up in Italy and had lived for a time in England. We’ve always traveled and wanted to give our children the experience of living in another culture and seeing the world from different perspectives; finally an opportunity came along we couldn’t pass up.Known as the International City of Peace and Justice, The Hague is home to the International Court of Justice, International Criminal Court and several other legal institutions. It has a strong expat community thanks to these and other international organizations as well as global businesses and embassies. While we are certainly involved with the expat community, we decided early on to live in a Dutch neighborhood and forge ties with the local Dutch community, too.

What’s helped more than anything else is making an effort to learn the language. I didn’t want living here to feel as though we are on the periphery or just biding time, so I jumped in with a couple of intensive courses. I’ve really pushed myself to get out and practice my Dutch with neighbors, shopkeepers and other locals on a daily basis. I’m certainly not proficient – I call myself a ‘perpetual intermediate’ – but it’s amazing the people you can meet and the wonderful conversations you can have if you make the effort.

Another recommendation is to become involved locally. For example, our daughter has played at a high level Dutch voetbal club for several years. Despite being located in a town a half hour from The Hague, the driving has been worth it as we’ve traveled to matches in cities, towns and villages throughout the region. Chatting with the other parents at practices and games has provided such incredible insight into small town Dutch life, not to mention helping with culture, customs and language skills.

That doesn’t mean that living in a different culture is always easy. As with most expats, our family has dealt with culture shock and experienced our share of the various phases of transition. The honeymoon period goes well, but then you can start to feel out of place, a bit isolated, even alienated. Eventually you work your way through it, and start feeling as though you belong, that you’re connected and part of the community. I’ve found that pushing yourself to become more involved through friends, work and activities, even if you don’t always feel like it, really helps get you over the cross-cultural hurdles. Aspiring expats would do well to read up on the challenges of living across cultures and how it can affect feelings of identity and ‘where is home?’ I’m currently working on a book about the importance of emotional resilience in expat life for these very reasons.

You might think that the US and the Netherlands are very similar as two westernized countries, and in many ways they are. But there are still cultural differences that take getting used to, both good and not so good. The Dutch are so forthright in their speech that it can seem abrupt and a bit abrasive at times. Customer service has a certain ‘take it or leave it’ attitude. The Dutch are very family-oriented and loyal to their friends, yet it can be hard to be fully accepted into their personal circles.

With shortened daylight hours during the winter and a cooler, often rainy climate, it’s no wonder that the Dutch revere the concept of gezelligheid (coziness) so much! What we especially enjoy is that the Netherlands is an outdoor culture that prizes physical activity, a creative culture that values music and the arts, and a cafe culture that enjoys relaxing conversation. You can’t beat biking along paths through the dunes near the gorgeous North Sea beaches, exploring the Dutch countryside or enjoying the dazzling sunlight late into summer nights. The Netherlands’ location makes it easy to get to several other European countries in a relatively short amount of time. The pace of life is a bit slower here, more relaxed.

As for the future, we hope to remain here for a few more years and then perhaps seek out a new adventure in another country. My writing career allows me to work anywhere in the world, and my husband may follow suit as an international consultant. There’s just too much to see, do and experience in this interconnected, multicultural world.

Linda shares more stories about her life in the Netherlands at www.adventuresinexpatland.com, on Facebook www.facebook.com/AdventuresinExpatLand and through Twitter @in_expatland.