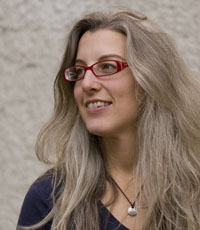 I’m Just Kooki. American-born, Swiss-immigrated, Qatar-living, wife to one, mother to two, author. Mostly I look for that little bit of crazy in us all. We moved to Qatar about two years ago for my husband’s job as curator and are staying because where else can you have a late night barbeque on Thursday night and then sleep in on Friday morning?

When in a foreign country, the first sanity saving rule is this: Do not ever take your children on the first shopping trip.
I first read that tip in the comfort of a fully-stocked apartment in Switzerland. I didn’t take my children to the grocery store at home. I couldn’t fathom why in the name of all that is sensible anyone would even consider taking their children on their first shopping trip in a foreign country. Then we moved to Qatar — with 3 suitcases. Our company wouldn’t pay for shipping.My philosophy is if it’s not worth taking with you, it’s not worth having. Almost everything we owned was in those three suitcases.
Which is why I immediately found myself eating a lot of my previously-held pompous notions.

We needed things like spoons, shampoo, towels. Everything, basically. I hadn’t taken into account that our children would know not a single soul in this country except for us, their parents. Their entire world did not just revolve around us; their entire world was us. They thought losing us would surely mean death. They were a tad clingy. Pompous notions fall swiftly when tested against reality. We took our children on our first shopping trip.

Carrefour, the store we were directed to, was located inside a mall. This mall was not just any mall; it had a theme, a Venetian theme. From storefronts imitating Italian architecture to fresco sky paintings to the canal with gondolas dispensing motorized joyrides to visitors, this mall was made to impress. And it did, in an elaborate Hollywood-set sort of way. It’s just that I had lived in Europe for the past 13 years. I hadn’t come to the Middle East so I could be immersed in imitation Europe. I wanted sand, date trees, tile, mosaics, and arches. If I was going to be surrounded by stereotypes, I at least wanted Middle Eastern cliches.

Shopping at Carrefour is a right of passage in Doha. It seems that most new residents end up there within 48 hours of arrival. It is a hypermarket. I know in the context of stores “hyper” means “huge, has everything” but the experience in Carrefour on a Friday afternoon does feel more like hyper as in “frenzied activity”. Especially if it’s your first Friday in Doha.

Shopping there was like a full-time job. Just choosing basic household supplies took hours. Mostly because we thought this a prime opportunity to teach a 4- and 9 year-old the art of shopping. I asked our eldest if a plate made her happy when she looked at it. I wanted to teach her that one should only buy objects which are useful or that you love. Primarily, I was trying to explain why we were not going to buy the plates she was admiring.

Unfortunately, for my fraying sanity, my daughter’s definition of useful and beautiful only briefly overlaps with mine before running off on a wild and erratic tangent. She took my words and owned them. “Mom,” she would whinge whenever I picked up something, say, a plain metal spoon, “That spoon doesn’t make me happy when I look at it. This does!” And she’d hold up something that was a) not even a spoon and b) a whole world of unimaginable gaudy with silver and gold and roses twining around a tree with crystal drops hanging off the branches. She was in excess gaud heaven, which quickly placed us in opposing directions.

Of course, while she was saying all of this, she walked so close to me that we could have been Siamese twins. My other daughter didn’t say a word. Her hand clung to mine as she looked out at her new world. She saw faceless women, men wearing dresses, nannies in pajamas. That’s what it looked like to a child. They didn’t know anyone else in the country. They didn’t even really know where in the world they were; they weren’t letting us out of grabbing distance.

Two years later our children don’t care about things like plates or how people dress. They aren’t attached to my side. They have moved on to more rational obsessions. Things like which friends to invite over to the barbeque, or if we should have a tea party instead. They would invite everyone, they say, even Chad. As I listen to the list of people they want to invite, I see that our Doha circle has expanded. We’d need more plates.