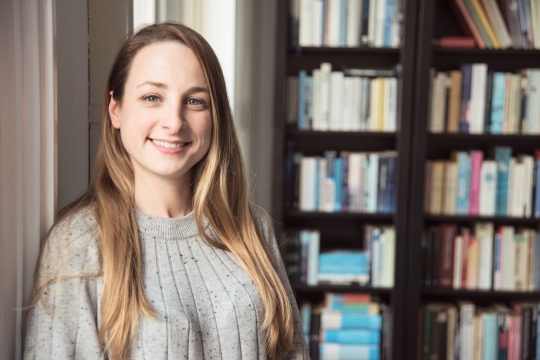 My name is Lindsay Rubino, and I’m a freelance writer and editor from New Jersey in the U.S. I’m 30 years old and have lived abroad for 6 years in total.

I moved to Belgium in August 2013 to join my boyfriend, who is Dutch.We met while I was studying abroad in Leuven, Belgium, from 2007-2008. We stayed together long-distance for five years while I worked in New York City and he finished his degree in Leuven. I finally took the plunge and moved after we realized it was no use living in two separate countries! We are now engaged and living in the Netherlands.

Most of the challenges I faced were due to not knowing the language well enough. I lived in Maaseik, a small “city” in Limburg where English is not nearly spoken as widely as in Brussels or Amsterdam or any other major city. They also speak a dialect here, so that made it doubly hard!

Also, because I used to work in NYC and lived in a busy area of New Jersey, it was difficult to get used to living in a rural area. I was frustrated a lot by not being able to find what I needed, and I had a hard time adjusting to Belgian/Dutch customs and leaving the American norms behind.

No, not really! I’ve met a few others in cities nearby, but as far as I know I am the only expat in my village. I met a handful of other expats in my Dutch classes, but Americans are rare in my area of Limburg.

It’s way less hectic and demanding. On sunny days, you’ll find people sitting on terraces for hours just enjoying the view. I spend a lot more time outside than I ever did when I lived in the U.S. I’ve also come to appreciate the smaller things: I love taking long, leisurely walks in the woods with my dog, whereas before I was focused on going out and experiencing city life.

I speak Dutch now but sometimes it gets frustrating when I don’t know how to say something, or I don’t understand what’s being said to me. I miss being able to walk into a shop and not worry about what I’m going to say or how to say it!

I also miss my friends and family back home. Because I live so far away, I can only visit once or twice a year. Technology has made it so much easier to stay in touch, but I wish I could take spontaneous trips to visit!

I’ve found the Dutch stereotype of being blunt pretty spot on. Some people may interpret it as being rude, but — while I am still sometimes miffed by a too-honest comment — I’ve come to accept it. In my experience, Americans are way less direct and try to be polite rather than tell a harsh truth.

Dutch cuisine is not my favorite, to risk offending the Dutchies! A lot of dishes are very much in the meat-and-potatoes category, and I don’t really get the obsession with boterhammen. I miss the variety that I could find in New Jersey, with sushi and burgers and sandwich shops on every corner. Limburg is not like Amsterdam, either, so we have fewer international restaurant options available.

I do have some favorite dishes: Belgian stoofvlees (a meat stew), especially over frietjes (fries); stamppot (mashed potatoes with meat and veggies, surprise!); and kibbeling (fried white fish). The Belgians and the Dutch do know how to make a really good dessert, too: oliebollen, stroopwafel, poffertjes…

Do the research before you move! I met some people during my integration classes that had not looked into immigration, and they ended up having to leave because they didn’t qualify for the visa they wanted. It sounds fun to just wing it, but it can cause a lot of stress if you’re unprepared.

Before I moved for good, I visited for three months to see how I would like it. Before that, I could only visit for a week at a time, so it felt more like a vacation than living here. The three months helped me start getting used to actually living there. I recommend that those who qualify for a three-month stay without a visa to do the same.

Learn the language! This is the most important thing I did for myself when I moved. Even though many people speak English, you will feel so much more at ease and independent if you can communicate with the locals. You can do the bare minimum and pass the integration classes with level 1, but it won’t help you in the long run.

Give yourself some time to adjust. People back home often think of moving abroad as a grand adventure, but it’s actually really hard. You’re constantly struggling to understand the language and customs, and it can be exhausting. Don’t feel bad if you’re not posting a million awesome pictures on Instagram because you’re actually feeling out of place. You will eventually get settled and start feeling like a local — it just takes time.

I don’t expect to move back to the U.S. anytime soon as I’ve really come to love life in Europe. I try not to think too far ahead, though, because you never know what will happen. We’ve bought a house, so we’re “stuck” for now — but we’re open to what the future will bring us!