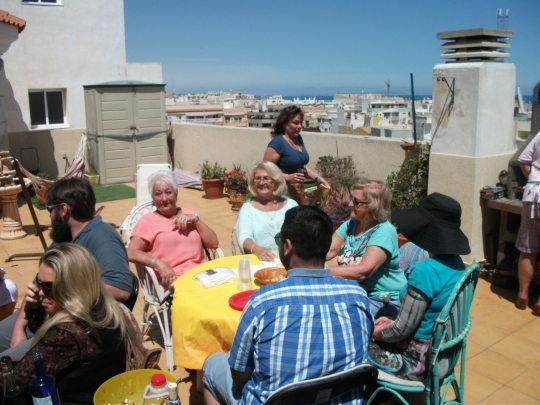 Expats enjoying a group bbq – in the photo there are six different nationalities.

Here are some ideas for how to integrate into your new Spanish community.First, be aware of some of the traditions and behaviour norms, which may not be the same as those in your country of origin. For example, in Spain it is not usual for people to socialise outside of their family circle at festival times such as religious holidays. They are far more likely to celebrate with their family, usually at home or in a restaurant. So, don’t be offended if your invitations are not accepted, or reciprocated. On the other hand, a kiss on each cheek is the standard way to greet friends of either sex: Spaniards are far from lacking in warmth.

Here are some more norms that might surprise you:

No matter where you go in Spain, and no matter what season or time of day it is, children are welcomed in Spanish pubs and yes, they might run riot sometimes, but in general are well behaved.

Apart from the distractions of the roundabout girls – which themselves are just another part of Spanish life – it’s the number one driving topic that everyone has an opinion on, when it comes to driving in Spain.

While it does not make any sense, common or otherwise, when entering a roundabout, if you are in the left lane, the traffic on your right has right of way. Without using their indicators, they can happily drive around the roundabout in the right lane all day long, or until they run out of petrol, whichever comes first.

That means they can and will cut you off, when typically you might expect to have the right of way, as you would in the UK, for example. But if you crash into the right-hand side of their car, the insurance companies will normally take the view that’s it’s your fault, even if it does not seem to make any sense.

The Spanish celebrate Christmas Eve – “La Noche Buena” – which involves a huge feast and much merriment. These days, The Spanish exchange small gifts on Christmas Day, but the main event is on January 5th, including a big feast, with Three Kings Parades and presents handed out on January 6th.

Go With The Flow

No matter how much you dislike some things about Spanish culture, traditions, bullfighting, football, their driving, local laws, etc., they are our hosts and almost nothing you are going to say or do, or whine and whinge about, is going to change that.

You can and should put yourself on the Padron and obtain residence status if you live in Spain for more than 183 days in any year, and you should ensure you have a vote, which you have to request at the Padron office, once you are there.

If you don’t vote, you cannot complain. No vote, no voice. Let the politicians fight the battles for you. And it is Spain after all, so appointments and visits from tradespeople and delivery drivers to your property are more a matter of luck than a fixed arrangement.

El Clasico. While there are other football teams in Spain, these are the big two and the majority of silverware tends to go to one or the other each season. Football is close to a religion for many Spanish supporters.

The Spanish do have other professional team sports, such as handball and basketball, but in general, sporting life revolves around football. They also have two daily Sports newspapers, one which backs Real Madrid and the other Barcelona, that you can find in almost every Spanish pub (if your chosen paper is not there, a previous customer has likely taken it home), to read over your café con leche.

Be willing to embrace new ways of thinking and behaving. Watch others, and take note of different ways of acting. For example, children usually accompany adults to restaurants and are expected to sit still and behave quietly and politely: unruly behaviour is not tolerated. You have no doubt heard of the famous siesta culture (an after-lunch sleep between 2.00 – 5.00pm), but did you know that afternoons here in Spain start at 5.00pm and go on till 8.30 or 9.00pm?

Coffee time is precious, and Spanish coffee is delicious. But they have no idea how to make tea, so if this is your national beverage you’ll need to make your own!

If you are fortunate enough to have ‘menu del día’ on offer at a restaurant near you, do take advantage of this traditional three or four course meal at a very reasonable price. This tradition was instigated by General Franco during his regime, as a way of ensuring that everyone could have at least one nourishing meal a day.

Learn the lingo. Take your own time, but don’t put this off. It takes around 1,000 hours to become proficient in a new language: don’t expect to be talking after a few months of lessons. 15-30 minutes every day is better than two hours once a week. I advise 30 minutes to cover new language and 15 to practise it. Every single day (okay, you can take one day a week off if you must!)

If you go to a school, be careful which school you choose. If you want to take exams, then join an academic course which teaches grammar as well as conversation. If you just want to be able to speak and understand, join a course that focuses on interactive activities such as role playing.

Whatever you do, don’t give up: practise, practise, practise. No one can learn for you. And you can’t learn to speak without opening your mouth! That’s like trying to learn to swim without getting into the water! If you wait until you feel confident you might never say anything: what’s the point of that? You just have to be prepared to make a fool of yourself, but more often than not, the local people will welcome your efforts and be pleased to help you. I’ve made friends as a result of making mistakes: the more of an idiot I sound, the more the shared laughter has bonded us.

Choose where you live with care: think ahead to when you might be older and /or infirm. An urbanisation might seem like a good idea for having facilities on hand such as shops and bars, but you certainly won’t integrate as quickly without going outside of your immediate area.

A rural location might seem ideal for peace and quiet, but can often leave you feeling isolated, and that wonderful feeling of remoteness might turn into annoyance when you have to drive for twenty minutes to replenish your supply of that item you forgot to put on your shopping list.

That leads us to road traffic: navigating roundabouts can be a bewildering process: some say that you should stay in the outside lane until you are ready to turn right, others that you should use the left-hand lane and signal when you want to move across to the right. Either way, most Spaniards seem to ignore the rules and do as they please, so keep your wits about you!

Join local groups – not just expat groups. There are plenty of associations, including charitable ones, which can help you feel you belong. And there’s almost always someone who can speak a little English. They may even be delighted to have a new member to practise with! Coach trips organised by Spaniards are a great way to widen your circle of acquaintances and may even lead to new friendships, especially if you are, or become, single.

Join in activities such as choirs or bands, walking groups, and neighbourhood centres. Learn to dance, make lace, paint, or whatever floats your boat, but do it among local Spanish people rather than exclusively expat groups.

Volunteer for local charities. Working in charity shops is one good way, or becoming a carer, or assisting in a school for children with special educational needs, or with mobility problems, or adults with learning difficulties – these are all ways of being of service and bringing you connections. Simply being available to read aloud for those with sensory impairments can often involve contact with families.

And finally, try groups of people interested in language and cultural exchanges. Two-way language support is a great idea: you get to practise your Spanish, they get to practise their English, and both of you get an insight into the other’s culture, all whilst enjoying a meal, drink, or outing.
¡Buena suerte!.

(Thanks to Keith Nicol for contributing some of the above information)