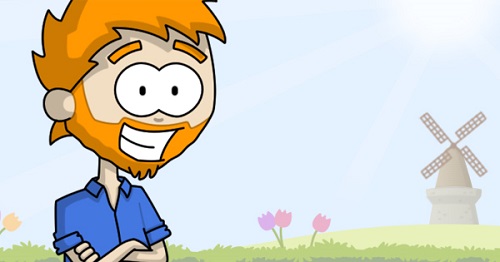 My name is Stuart Billinghurst. I’m an accident prone Englishman and the writer of InvadingHolland.com.Where, when and why did you move abroad?

I moved to The Netherlands in the summer of 2001. I didn’t exactly plan to move. In fact, in many ways it was quite by accident. I had no plans to move to Holland. I didn’t even have any plans to leave London but after a year of being out of college and still trying to find a job I came across a cryptic job advertisement that intrigued me. It had no address, no phone number. All it had was an email address. It was very mysterious but I thought I would apply anyway even though I was aware that it could lead to some kind of fake office interview / black market organ harvesting situation.

When I received a reply a few days later there were two surprises. (1) At no point did they enquire about the condition of my internal organs and (2) they were offering to pay for my flight to the interview location in Amsterdam… Holland. As you might have guessed until that point I had (maybe rather foolishly) not even considered that the job might be in another country.

Not many apart from the fact that I was completely unprepared and had no idea what I was doing. I didn’t really discover any big differences between The Netherlands and England (other than obvious things like the language). It was actually all the little differences that created the confusion. Most things were similar enough that I would recognise them but different enough that I would undoubtedly get something wrong. Like the time I bought vla (a sort of yogurt) thinking it was milk.

There are a lot where I work in Amsterdam but in the village where I live in Friesland (the very North of The Netherlands) I think I could be the only one. It’s a small village and even people I don’t know have started referring to me as The Englishman. News travels fast.

I really like the pace of life here. The Dutch are very laid back. I like being able to cycle around the city. You would never be able to do that in London without ending up under a truck. Before I moved to the Netherlands I had not been on a bike since I was 13.

I think the locals very friendly too (so friendly in fact that I married one of them). Some people sometimes describe them as blunt and sometimes this can be true but I just think they are more honest and that can be very refreshing. I like the Dutch a lot.

There isn’t really anything I dislike about living in The Netherlands (although I do still struggle with the language). The hardest thing about being an expat is my parents being in another country, especially now they are grandparents. I want them to be a part of my children’s life. However, England is not that far away so it is easy to go over once or twice a year to say hello.

That’s a tough one. As I’ve mentioned the Dutch have a very different attitude to life that in some ways is the opposite of the British attitude (apologise for everything even if you’ve done nothing) but I had no problems adjusting. I’ve kind of adopted the parts of the Dutch attitude that I like and kept the others from my British side (I no longer apologise about the fact that I apologise for everything).

Don’t be afraid to give life in an unfamiliar country a chance. I’ll never forget when I was given that advice by a good friend. I’d only been in the country for three days and I was feeling very home sick. We were on the phone and I was telling him about how I was thinking about giving up and coming back. It was his advice that made me stay and start enjoying life in the Netherlands. Although to be fair the words he actually used were, “Don’t be a twat. You’ve only been there for three days. You can always come back later you idiot.”

Since I moved here I’ve met a Dutch girl, got married and had two kids. I think I am very settled. I don’t have any plans to move which I guess would make my plan for the future: learn to speak Dutch properly.

You can keep up to date with Stuart's adventures on his blog, Invading Holland.