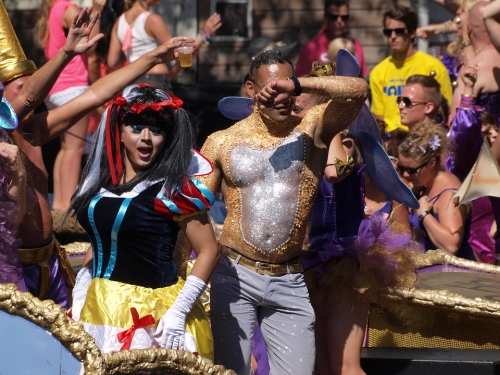 Want to party like the Dutch? Mark up your calendar with these ten fun festivals.

Known to the locals simply as Oud en Nieuw (Old and New), New Year’s Eve celebrations in the Netherlands are possibly the most exciting (and chaotic) in the world. The lifting of the ban on the sale of fireworks for the three days leading up to New Year sends enthusiasts rushing to the shops. Streets are carpeted in the red wrappers of bangers set off by teenagers, and fireworks are launched willy-nilly in public spaces with little regard for health and safety.

Municipalities organise their own official pirotechnics. The Scheepvaartmuseum (Maritime Museum) in Amsterdam, the Erasmusbrug in Rotterdam, and the Hofvijver in The Hague host particularly spectacular displays.

At midnight, neighbours clink champagne glasses outside their houses and share oliebollen (doughnuts) and appelflappen (apple fritters) smothered in icing sugar. It’s a sweet start to the year and a great way to meet the local residents.

The Netherlands is famous for its flower trade and Noord-Holland’s Bloemencorso on the 3rd weekend of April is a spectacular showcase of Dutch floriculture and creative genius. The gigantic, jaw-dropping flower sculptures process through Noordwijkerhout, Noordwijk and Haarlem, following a 42km route via the celebrated Keukenhof gardens, which are carpeted with tulips at this time of year. 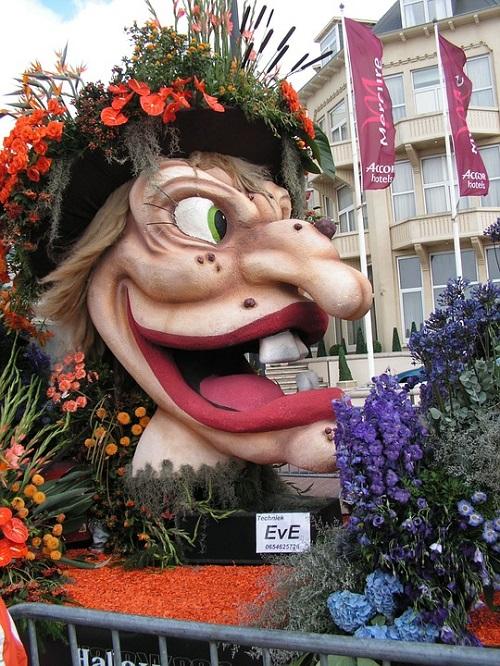 For around €5, enthusiasts can reserve tickets to see the floats being assembled in Sassenheim prior to the parade. The theme for the procession changes annually.

In the provinces of Limburg and Noord-Brabant, the Catholic festival of carnival is the highlight of the year. Carnival is three days of madness in February or March over the period leading up to Ash Wednesday. Celebrations begin on the Saturday with an opening ceremony where the mayor ‘hands over’ the keys to the city to a jester figure, the Carnival Prince, who establishes a temporary kingdom of fools in its place. The name of the town is changed and general craziness ensues, with the prince – normally a well-known local authority figure – whipping up enthusiasm amongst the crowds.

Costumes and face paint are as outlandish as possible and dominated by the traditional carnival colours of green, red and yellow. The highlight of carnival is the Optocht, a gaudy procession of marching bands and colourful floats. Snacking at the food stalls, drinking and dancing go on until late at night. For carnival on a large scale, Breda, Den Bosch, Eindhoven, Maastricht or Tilburg are your best bets.

This is the big one: the most cheery and patriotic party in the Dutch calendar and not to be missed by newcomers. The celebration of King Willem Alexander’s birthday, on the 27th April (or 28th if the 27th is a Sunday) sees the country come together in one ginormous orange-tinted street party. Pavements are lined with residents selling their unwanted things and hawkers peddle lurid souvenirs, snacks and cans of drink.
For the party set, Koningsavond – the evening before – is a big night out. On Koningsdag itself, the young and trendy crowd onto canal boats pumping out loud music or gather at the bustling street bars. 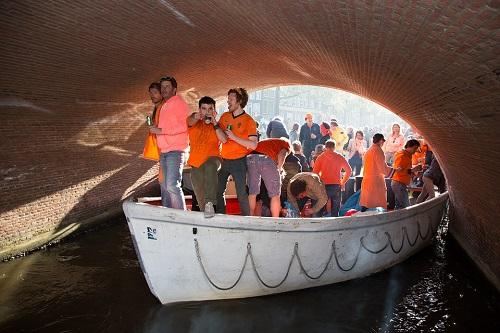 The larger towns have dedicated markets for children where kids sell off the toys, books and clothes they have outgrown, seek buyers for homemade cakes, or run simple fairground-style games stalls.

Dress yourself head-to-toe in orange, paint a tricolore on your cheeks and join in the fun.

What could be more Dutch than a festival devoted to herring?

Vlaggetjesdag takes place in mid-June in The Hague’s seaside resort of Scheveningen and celebrates the start of the herring season. Traditionally, fishing boats were decorated with pennants as they went out to sea for the first catch of the year, in June, when the fish are deemed to be at their best.

The Saturday celebrations see the town festooned in flags, locals dressed up in traditional Dutch attire, and a huge programme of fun events. Tall ships and fishing vessels come into port and some are open to the public. You can hear live music and sea shanties and see displays of traditional workmanship, such as basket weaving. Visitors can peruse the handicraft stalls, taste some fresh herring, and watch demonstrations of cheese and mustard making.

Children can take part in old-fashioned games such as barrel rolling and shuffleboard, or roll up their trousers for some beach soccer.

The port is the main focus of the celebrations, but the Keizerstraat and Badhuisstraat also host events.

In the first week of July, Rotterdam hosts the largest indoor music festival in the world, the North Sea Jazz Festival. This three-day festival, originally in The Hague, has been in running for over 40 years, attracting some of the biggest names in jazz as well as providing a podium for rising stars. Performances span 15 stages and the event attracts around 70,000 visitors each year. Tickets for all three days cost from around €200 for a basic package to almost €1000 for the VIP experience. Day tickets are also available with reductions for children. 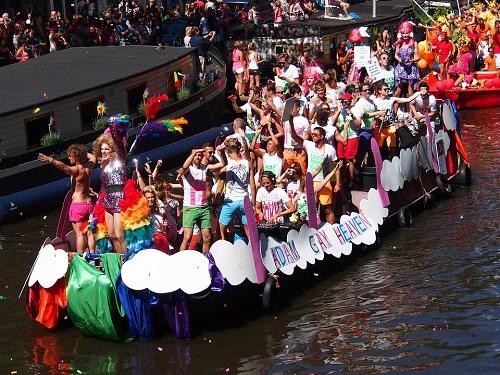 Pride Amsterdam is a great excuse for a party

The highlight of the week for most visitors and residents is the flamboyant canal parade on the Saturday afternoon, where 80 colourfully-decorated boats and floats process down the Prinsengracht canal, loaded with enthusiastic ambassadors for the LGBTQIA+ community dressed in wild and wonderful costumes. The joyful atmosphere created by the cheering crowd, the uplifting music, and the confetti-filled sky are hard to beat.

A few days later, Amsterdam festivities continue with the Grachtenfestival (canal festival), the largest classical music festival in the Netherlands. The extensive programme covers 90 different venues and offers both free and ticketed performances, as well as several special concerts for children.

The event is swiftly followed by the Prinsengrachtconcert, where a floating stage surrounded by an audience in boats, plays wondrous music to all who can get close enough.

This is a festival that children will love as it involves singing, sweets and biscuits.

At dusk, children assemble in small groups proudly brandishing their lampions – homemade lanterns, fashioned from paper, jam jars, bottles and boxes – and take to the street in search of neighbours who want to play along.

Participating households and businesses hang a lantern from their door, signalling to passing children that they may stop by for a treat. The children knock at the door, sing one of the many Sint Maarten songs, and are then rewarded with a tangerine, a speculaas biscuit or sweets.
Participation varies between provinces, but most towns will organise a procession by lamplight.

Sint Maarten was a Roman soldier who became a monk and was later made a saint. The 11th November is the anniversary of his death some 1700 years ago.

In Utrecht, where he is the patron saint, there are week-long celebrations in memory of him. To learn more about the history of Sint Maarten, follow the Sint Maarten trail in Utrecht which takes you over the attractive Maartensbrug (Martin’s bridge) and past plaques and monuments dedicated to Sint Maarten or significant to his story.

Sinterklaas is a Father Christmas figure with a red cloak, staff and bishop’s mitre. His arrival in mid-November, by steamboat from Spain, is known as the Intocht, and marks the start of the festive season and a period of unbridled excitement for Dutch children. Once Sinterklaas has arrived, they may put their shoe out at night and receive small gifts from him as he passes through the town. 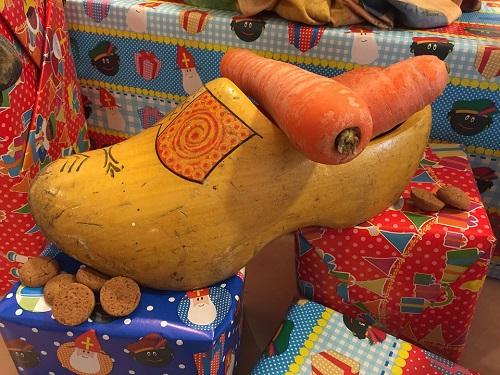 Sinterklaas is accompanied by a team of assistants, the cheeky Zwarte Pieten, who toss handfuls of pepernoten (spicy biscuits) into the eager hands of the swathes of children that line the road, hoping to get a glimpse of the big man in red. Increasingly a subject of controversy, these black-faced helpers, which hark back to an era of slavery and imperialism, have begun to paint their faces in a variety of colours, thus easing tension at this popular event.

Intochten take place in most large towns and are accompanied by the hearty singing of Sinterklaas songs which the children practise at school.

On Pakjesavond, on the 5th December, Sinterklaas leaves a large bag of presents at each household, often accompanied by a comical poem about the recipient of each parcel.

You can also attend Sinterklaas’s Uittocht the next day, when he returns to Spain. In Amsterdam, this departure is all the more dramatic as Sinterklaas takes to the sky by helicopter.

What's your favourite Dutch festival? Let us know in the comments below!