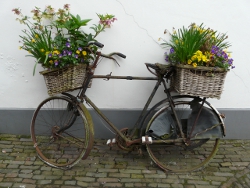 Fiets (bicycles) are a very common sight in Holland. They are a popular mode of transport and it is estimated that there are more than 16 million of them in the country. This number may or may not include the mangled, rusting, one-wheeled, non-roadworthy bicycles found chained to lamp posts, bridges or sunk at the bottom of the canals around the country. Even if it does there are still a lot of them in use every day.

Some bicycles look like rusty old frames that have been handed down through the family generation after generation. In most of these cases the locks seem to cost more than the bikes themselves, and there is no need for a bell since the squeaking of the wheels is enough to give any pedestrian a fair warning. Some Dutch people like to paint or decorate their old bikes as well. When visiting Amsterdam it is usually guaranteed that you will see at least one bicycle chained to a bridge somewhere that has been decorated with plastic flowers or painted with bright circular patterns to make them more unique. Another reason for this could be to turn away bicycle thieves.Unfortunately, Holland has a big problem with bicycle theft. It’s not unusual to see a shifty-looking junkie walking around with a stolen bike asking, “Fiets kopen?” (“Buy a bike?”). If they are able to sell it to someone for 10 or 15 euros it does not take long for that person to then lose the same bicycle to another junkie later. It’s a perpetual cycle (no pun intended). It is said that having your bike stolen makes you a true Dutch person and it is a rite of passage for all expatriates. I have not had my bike stolen yet, but I did have it taken away once when the authorities thought it had been dumped (I got it back though).

Despite the risk of theft there are some more modern-looking bicycles around (as well as the old), but the one thing you will hardly ever see is a mountain bike. This might be because you will hardly ever see any mountains, hills, valleys, declines or inclines in Holland and using a mountain bike for speed bumps would be over-excessive. Holland is a very flat country but this is also part of what makes it a very good place for cycling.

There is over 4,500 miles of cycle path throughout the country and a surprising amount of tourists mistake them for footpaths. This intrusion of territory (as they see it) is not always met with understanding by some cyclists. Some will leave it until the last possible second to ring their bell to let pedestrians (victims) know of their stealthy approach. When this happens, the best thing to do is to pick a direction and jump, because you won’t have any time to look around and judge the right direction to dodge anyway.

For a Dutch person a bike is not just a one-person vehicle either. The rack on the back can be used as a second seat for a passenger who is willing to sit sideways and risk having their knees knocked off by any passing objects. I myself have accidentally jammed my feet into the back wheel of a bicycle (that I was the passenger on) in the past, because it got too close to signposts and parked cars for comfort.

It’s hard to say why cycling is so popular in Holland (compared to other countries). It could be because traffic laws favour bicycles over cars, or that it is a way of staying healthy. It could also be that they are an easy way to get from one place to another and, when all the available parking spots are full, there are still lampposts, bridges, fences and other city objects that bicycles can be chained to. Maybe they simply like to terrorise pedestrians with them or they all liked the song Bicycle Race by Queen. Whatever the real reason is the Dutch seem to love their bicycles.