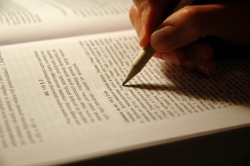 Approximately 20 years ago, I was sitting on the Harwich-Hoek van Holland boat with two friends and a peculiar little guide book. We were taking turns to recite “Spher-ayhkt OO ng-gels ass-too-bleeeeft?” and other natty phases to each other. After a while, we began wondering if we were doing the right thing going to live in a country where people use words like ass-too-bleeeft, even if we were only planning to stay for a few months. Frustrated and slightly unnerved, we gave up and went to watch Robocop in the ship’s cinema instead.

I think that initial optimism followed by shock and awe is a common first reaction to learning Dutch. Ok – unlike me and my friends, not everyone is stupid enough to set off for a new country, thinking they can pick up enough of the language on the cross channel ferry to have a cosy chat when they arrive. The trouble with Dutch is that it is unlikely that you will have heard it anywhere else before you arrive here as it has a pretty small language area. Even if , unlike us, you are smart enough to listen to language CDs beforehand, this is no substitute for the real thing. Despite similarities to German and shared words with English, Dutch really is in a class of its own. The other, much-repeated problem is that most Dutch people speak such good English that you feel like an idiot for even trying and you feel like more of an idiot when they answer your stumbling attempts to speak their language with a smooth reply in near-perfect English and what often looks like a badly-concealed smirk on their faces.People have different ways of reacting to this troubling situation and I’ve identified 3 distinct types: the integrator, the ostrich and the chameleon. The integrator gets down to work immediately. There are two ways in which to be an integrator – the sensible way and the silly way. The sensible way, of course, is to prepare yourself beforehand (those language CDs again) and get yourself into a good language course as soon as possible. Obviously, I went for the silly way. I wrote myself in for a bucket-price language course, got bored by the snail-like pace, dropped out and ended up learning Dutch from the other people in my living group. Everyone spoke Dutch to me all the time and when I finally got up the nerve to speak, each mistake was corrected mercilessly. After a few months, I spoke a sort of Dutch, so why is this the silly way? I could just as easily call it “the immersion in a tank of icy-cold water method”, or “the Sadomasochistic approach”. It was silly because I got pretty lonely sitting there for months, mutely trying to figure out what everyone else was saying. Moving to a new country is supposed to be fun, at least some of the time. Also, when I went back to doing language courses, I realised that my home-spun method had left me with several ingrained bad habits that took a long time to eradicate.

The ostrich takes the completely opposite approach, the “if I hang out with other ex-pats, watch enough BBC and refuse to learn a word of Dutch, then Holland is just a flatter version of home” approach. A few years ago, I had a curious conversation with a woman who runs a successful business in Amsterdam while having the ostrich approach down to a tee. She explained that she had chosen not to learn Dutch because it gave her ‘a better quality of life’. I can’t agree with her, but I suppose she had a point of sorts. Dutch is a difficult language to learn and you are unlikely to use it ever again after you leave the Netherlands. What’s more, everyone knows at least one English speaker who has lived and worked here for years without learning as much as a dank je wel. Maybe sticking to their native language acts as a comfort blanket for ostriches, giving them a feeling of security and control that would disintegrate if they had to negotiate everyday life in a ‘foreign’ language. Or then again, maybe they are just plain idle.

Then there’s the chameleons. This group mainly consists of people who have moved here to be with partners or family. Not under pressure to find work immediately and with a ready-made network in place, they have time to take lessons and practise their pronunciation, gradually blending in to their new environment. This is definitely the most pain-free way of learning Dutch and you can still use it, even if you come to the Netherlands on your own. Follow classes, allow yourself to acclimatize while listening to as much Dutch as possible and when you feel ready, start speaking to friends and colleagues who are less likely to answer you back in English. And above all, enjoy your stay in the Netherlands.