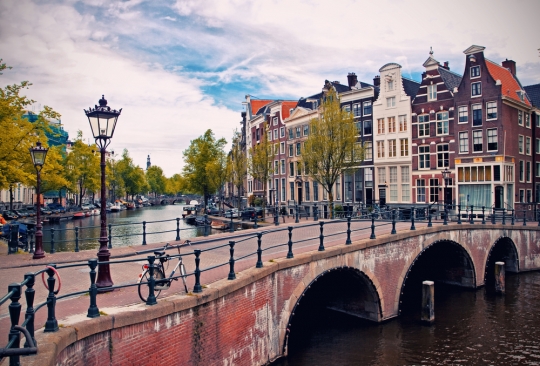 As much as relocating to another country can be an exciting adventure, it can also be a challenge. For teenagers, whose lives are already filled with uncertainty and change, moving to another country can be incredibly overwhelming. Moving means changing school, making new friends and re-establishing an identity. However, moving to a place like Amsterdam provides a smorgasbord of fun new experiences and opportunities for a young person who has a bicycle to whizz around town.We’ve put together a list of things to think about when helping your teenager settle into their new life in Amsterdam.

Teenagers locate a large part of their identity in their friends and social activities. Moving to Amsterdam, your teen’s biggest fear will probably be difficulties making friends or not feeling accepted amongst their peers. Encourage them to follow their interests by joining a sports team, a dance class, photography club or even starting a new hobby. The City of Amsterdam runs a range of sporting and creative activities for young people, which will help get your teens off Netflix and out making friends.

Getting used to their new surroundings, your teenager will probably experience the stress of balancing their desire for independence with their reliance on you as parents. Helping your teens to develop age-appropriate activities that allow them to enjoy their independence means they will take greater ownership of their experience and overall happiness.

Tip: Don’t worry too much about letting your teens travel around the city independently. Many young Dutch children ride their bikes to school on their own, as Amsterdam is one of the safest cities in the world.

School is the primary source of friends for teenagers. When moving to Amsterdam, your teen will have to get used to a new school system, location, timetabling, subjects and much more. It is important for your teenagers to have realistic expectations and avoid any nasty (and tear-inducing) surprises. So, do your research. Take a look at the various options available for secondary education and tour some schools.

You will need to consider whether you want to send your teens to a Dutch school or an international school. Most expats opt for an international school that offers the globally-recognised International Baccalaureate (IB) curriculum. Younger teens have the option of attending an international bridging year or classes specially designed for newcomers to the Netherlands, which will help them become more familiar with Dutch culture and language. There are also a range of bilingual secondary schools in the country.

Tip: Have your teen take a tour of their new school, giving them the opportunity to research the subjects, clubs and activities on offer. Not only will they familiarise themselves with the layout and staff, they’ll also have a chance to check out what other kids are wearing, which will relieve some of the stress on their first day.

Adapting to life in the Netherlands is going to be much easier if your teenagers have some understanding of Dutch language. But everyone in Amsterdam already speaks English fluently, you say? Well, making a little effort to speak the language will go a long way in the Netherlands. Moving around the city, making purchases and meeting new people are all made easier with a little Dutch under your belt.

Your teens’ language knowledge will also give them an insider’s view into Dutch culture, helping them to gain greater mastery over their environment and feel more settled. There are a range of language courses available, including those specifically for children and teens.

Tip: If your kids are willing, try learning the language as a family. Your younger children and teens will be able to impress you with how quickly they pick up the language.

Talking About Drugs And Alcohol

We all know that Amsterdam has a certain reputation. However, the decriminalization of drugs in the Netherlands has actually decreased drug use, particularly among 13-18 year olds; good news for parents! Living in the Netherlands, your teens will be exposed to honest education around drug use, actually making them less likely to smoke and drink.

Tip: The Dutch approach the topic with their teens in a relaxed but direct manner – Dutch people are generally pretty direct. Try doing the same, and if you’re still worried about your teens’ exposure to drugs, talk to their new school or get in contact with the Trimbos Institute, a leading expert in drug treatment and policy.

Culture shock is the anxiety experienced when moving to a new culture and so being challenged by a different set of attitudes and way of life. The good news is that culture shock is completely normal and generally passes. Most children undergo a rollercoaster of emotions adapting to life in a new country; the thrill of new surroundings and routines is typically followed by frustration, anger or depression as they deal with difficulties in communicating and feelings of isolation.

Explain to your teenagers that it’s completely normal to undergo a range of emotional highs and lows as they adjust. Helping them to understand the long-term rewards (friendships, language, cultural understanding) can also put their challenges into perspective.

Tip: Try to enhance your teenagers’ sense of security by maintaining family values and routines, whilst also embracing opportunities. There are plenty of activities that you can do as a family, such as skating, cycling and discovering street art, just to name a few.

When helping your teenagers to adapt to life in Amsterdam, it’s important to remember that life at home wasn’t trouble-free. It’s easy for teens to idealize the past and forget all the difficulties back home. However, if you encourage your teen to focus on the present and help them to adapt in the way that best suits them, they’ll do better at making the most of the experience. Before you know it, they’ll never want to leave.

Moved overseas with a teenager before? What tips do you have for other parents? Share your thoughts in the comments below, or answer the questions here to be featured in an interview!