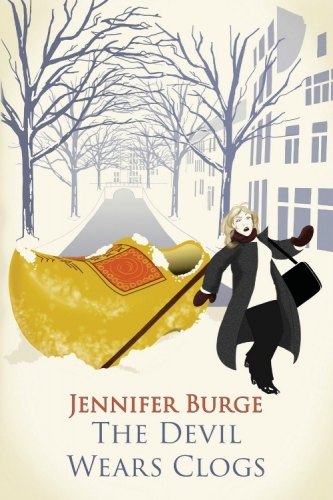 Jennifer Burge is an American expat who has lived in a variety of European countries. Her memoir, The Devil Wears Clogs, predominantly focuses on her time in the Netherlands as a new expat trying to fit in with a culture that was very different from what she’d been used to before.A lot of accounts written by expats can feel preachy. After all, part of the reason to write about your own experiences is to help other people in a similar situation, so it can be easy to fall into the trap of lecturing people about what they should and shouldn’t do to fit in to their new countries.

The Devil Wears Clogs doesn’t do that. It is instead a refreshingly honest account of expat life. Burge doesn’t attempt to make herself sound like the perfect savvy expat who fits in like a local as soon as they land. Instead, she discusses the bits she found hardest about her expat journey and does so without mincing words.

There were times while reading this book when it almost persuaded me I didn’t want to move abroad, ever. It does a great job of getting across just how stressful it can be when you move thousands of miles away and end up trying to create new friendships, juggle a workload you’re not used to, deal with management styles that differ from the ones back home, and try to find time for romance as well.

But it also points out the beauty of learning. The final couple of lines from the blurb on the back cover sum up the book perfectly:

“That's when I figured out that maybe I was the one that needed to change. Not an entire continent.”

The first few chapters of the book deal with the decision to move abroad – both in terms of the things Burge took into account, and the things that were more difficult than she’d been expecting. One of the most challenging aspects of the move was the sudden decrease in contact with friends and family members. While it’s easy to predict that this would be difficult when things are going badly, I found Burge’s perspective interesting because she also spoke about how hard it is to not have someone to share your happiness with when things are going well.

“Three months into my shiny new dream coming true came the realization that dreams are empty without loved ones to share them.”

The book does an excellent job of explaining how it actually feels to be in a new country, too. From the confusion about office culture to the “full force Deutscher stare”, Burge sucks the reader into her world and helps us to see the experience of expat life through her eyes.

One of the main things I liked about the book was that it couldn’t easily be put into a specific category. It’s a great guide on how to be an expat, but it’s also filled with personal experiences and perspectives, which makes it read like a novel. This is certainly one of its selling points – if you’ve been trying to read books about moving abroad but have been stymied by the dry presentation of many guides, The Devil Wears Clogs is probably just what you’re looking for.

There were points where I found the book difficult to read, though. Burge is so open about her assumptions and feelings towards the countries she moved to that at times it can feel like you’re reading the parts of someone’s inner monologue that they normally keep to themselves. She doesn’t hold back on telling it exactly how she saw it, even when that underlines her own lack of understanding. While I was reading the book, I found this hard. My mind snagged on the criticisms of the countries and their cultures (coming from Europe myself, I was perhaps more sensitive to this than others might be), but after I’d finished the book and put it down, I realised it was quite refreshing to read something so straightforwardly honest.

Many writers try to position themselves as the hero of their stories, and understandably so. Whilst Burge is clearly the protagonist here, however, she doesn’t try to make herself sound perfect and admits the mistakes she made in her expat journey with an honesty that will no doubt prove very useful.

“My biggest mistake, however, was the assumption that the European mentality is similar to American mentality because we are both “Western”, and similar in appearance. There is no truth to that assumption.”

I can imagine that for anyone who has moved to a new place and felt about it the way Burge frequently felt about the Netherlands, it will be a relief to read that it is possible to overcome the difficulties with cultural differences and learn to make the best of the expat experience.

It’s not all about mistakes and difficulties, though. Much of the book also describes the new friends Burge made and the fun she had exploring new places. Even getting to know the cultures of each new country she moved to sounds like an exciting and interesting challenge. Reading a book in which someone travels to several places in Europe consecutively is also useful, as it provides more of an overview of the continent as a whole and may be a good thing to read if you’re not yet sure which European country to make your next home.

Without wanting to ruin the ending, by the time you reach the final chapter of the book you are led to realise that, although expat life has its challenges, it is worth sticking it out and it does get easier over time – not least because we change as we meet more people and assimilate ourselves into increasingly alien cultures.

The Devil Wears Clogs by Jennifer Burge is published by WorldWise and is available to buy on Amazon. Jennifer's second book, an account of her time as an expat in Asia, is currently being written. You can keep up to date with Jennifer and her expat journey on her website, Jennifer's Jnana.