Home Thinking About Moving To The Netherlands? Read This First Netherlands

Thinking About Moving To The Netherlands? Read This First

The Kingdom of the Netherlands, usually known simply as the Netherlands, is one of the most popular expat destinations around the world and particularly in Europe. This small country is among the most densely populated, but it’s also one of the most stable and well-developed. The Netherlands is famous as a liberal and progressive nation, with open and tolerant attitudes to everything from same-sex marriage to abortion to cultural diversity.

The country is the second-largest exporter of food and agricultural products in the world, one of the most popular locations for foreign investment in Europe, and has among the highest per capita incomes, with a high level of personal and economic freedom and excellent infrastructure, especially in terms of healthcare and education. On practically every parameter you can think of, and in every study or report you look at, the Netherlands scores extremely well.

It’s therefore no surprise that it attracts large numbers of expats. However, no place is perfect, and there are of course always challenges to deal with. Some of these are problems that the Dutch themselves are grappling with, but many are essentially cultural differences that pose a challenge only to outsiders, who need to adjust to the local way of doing things. The Netherlands may be a modern nation, but it has its own history and culture, which is often substantially different from what many expats are used to. 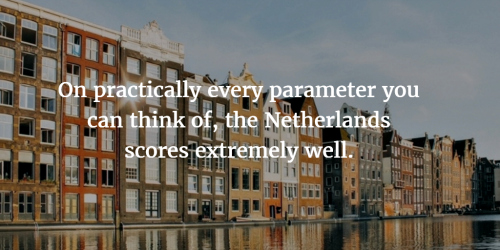 There is a lot that is rewarding and wonderful about being an expat in the Netherlands, but to get the most out of living here, it’s important to know exactly what you’re getting into. Here are a few things that you ought to know if you’re considering moving to the Netherlands.

Knowing (or not knowing) this little fact will probably not drastically affect your life, but if you’re living in the country, you ought to know what to call it and what not to call it. Outsiders often use the two names interchangeably, but Holland actually refers to only two of the Netherlands’ twelve provinces, North Holland and South Holland. Calling the entire country Holland is therefore a bit like calling the whole of the United Kingdom England. People who are from North or South Holland will probably not mind very much, but people from the parts of the country almost certainly will.

Expats in the Netherlands often talk about how difficult it is to make friends and to integrate into Dutch society. This is about more than just the language barrier, which isn’t really that big – English is fairly widely spoken in most of the country, and plenty of expats make the effort to learn Dutch, but still feel somewhat isolated. This is sometimes ascribed to the Dutch being unfriendly with strangers and unwelcoming to foreigners. However, the truth is that the Dutch are extremely friendly people and will happily strike up very involved (and sometimes, for expats, uncomfortably forthright) conversations with strangers and acquaintances. Dutch society is also very open to cultural diversity, and many expats find that Dutch workplaces are among the most welcoming in the world. 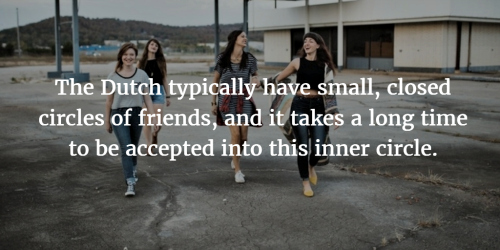 The problem for expats however is that the Dutch typically have small, closed circles of friends, and it takes a very long time to be accepted into this inner circle. Naturally, this isn’t a problem for those who have grown up in the Netherlands and have formed their own circles over the years. For expats however, who come in and develop a social network from scratch, the only option in the first year or two is to look for other expats. Nonetheless, it’s important to continue to maintain relationships with the local people around you. May expats find that though it takes a long time, when friendships do happen, they are exceptionally warm and loyal, and you are practically treated like family.

Expats also often find the Dutch rude; however, once again, this is a misreading of local culture. Politeness isn’t valued in Dutch culture as much as directness is. The Dutch tend to get straight to the point, and will often say things to strangers that most non-Dutch people would think twice before saying even to friends. Queues are also not taken very seriously in the Netherlands, which many expats – particularly the British – can find quite frustrating.

Celebrations are another unique aspect of the Dutch, and they’re also strangely contrasting. The Dutch birthday party, for example, is a rather tame affair, where people get together very early in the evening, sit in a circle, have a bit of cake and coffee while talking to each other, and then leave, with no drinking or dancing. On the other hand, the celebrations for National Day, sports matches, and the many popular festivals are huge, lively, public affairs that can take expats by surprise.

Finding accommodation can be complicated

Furnished, unfurnished, and shell apartments are the three options you will typically encounter when looking for accommodation. Furnished apartments are the most expensive, and the extent to which they are furnished varies. If you want to save a bit of money, you could choose an unfurnished apartment instead; however, shell apartments are usually a bad choice, as they come with absolutely nothing. As the name indicates, these apartments are truly shells, without even lighting or flooring. Renting one of these may save you money on the rent itself, but you’ll spend a fortune on fitting out the apartment. Beyond this, you will find a variety of options depending on your budget and preferred location.

One of the most important things you need to do when you get to the Netherlands is register at an address. Without this, you will be unable to get your social services number, open a bank account, or almost anything else. It is therefore important to ensure that it will be possible for you to register at the house or apartment you are planning to rent.

Dutch bathrooms are exceptionally small. The bathrooms also tend to have no windows or vents, which can make them somewhat claustrophobic.

There’s also the birthday calendar that hangs inside the bathroom of almost every Dutch household, with every birthday of friends and family marked on it. To foreigners, it’s a strange choice of place for a birthday calendar, but when you think about it, it’s actually a great way to avoid missing anyone’s birthday.

However, the most unusual thing about a Dutch bathroom is probably the toilet, which typically has what is called an “inspection shelf”, allowing you to have a good look before you flush. This design is supposedly German, and there are advantages to it in terms of health (monitoring your bodily waste) and environment (water usage). However, many expats find the Dutch toilet hard to get used to.

You will need a bicycle

Owning a car in the Netherlands is painful, expensive, and unnecessary, especially if you’re importing it. For local travel, most Dutch people use a bicycle, no matter how old they are. Local travel is of course defined rather loosely, and can regularly involve five- and six-mile rides, which are initially rather overwhelming for many expats. However, the Netherlands is a great place to cycle, and most expats gradually get used to it and even learn to love it. Cycling everywhere is a great way to keep fit, and it’s also the most environmentally friendly way of getting around. In addition, the country is almost entirely flat, which means that you’ll rarely be dealing with uphill climbs. 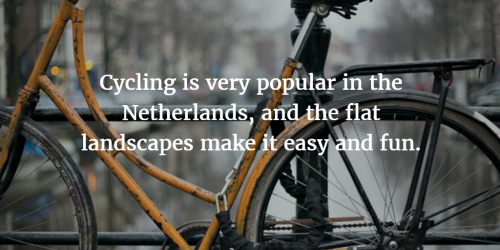 A few precautions are however necessary when using a cycle in the Netherlands. Firstly, if you’re buying a second-hand bike, buy it from a reliable, legal used-bike store or market, and ensure that it is in full working condition. Repairs are expensive, and a cheap bike that needs a lot of parts replaced can double in price by the end of it all. There are also a lot of stolen bikes around. This brings us to the other important precaution – always lock your bike, or else it will almost certainly be stolen and resold, and the local police will rarely be able to help you.

For longer distances and for situations where cycling isn’t practical, there are trains and buses, which are fairly efficient and reliable, and not particularly expensive as long as you take a subscription. Some organizations even reimburse employees for expenses on public transport.

Once you’ve worked in the Netherlands for a few years, you’ll probably find it difficult to work anywhere else in the world, except for countries that have a similar regard for personal time. The Dutch are able maintain a great work-life balance, and it’s only a miniscule percentage of the population that regularly works long hours. Personal time and family time are fiercely protected, and weekends and vacations are never impinged upon by work.

Employees are also allowed great flexibility, and can work from home or adjust their working hours if necessary. There is a very clear line between work and personal life in the Netherlands, and most people rarely cross it. Adjusting to all of this can be difficult for expats who are highly focused on work and careers, but adapting to this way of life can be deeply rewarding.

Another unusual thing about the Dutch workplace is the general disregard for authority and hierarchy. Employees at all levels mingle quite freely, and everyone can have their say in any decision or course of action – position isn’t as important as your work and your ideas. At the same time, this also means that there’s a lot of criticism and debate, which can be unsettling to many expats. Expat bosses in particular need to be aware of how things work. Asserting authority is not the way to get things done. It’s important to remember that this is not about insubordination and there is rarely any personal agenda involved, only a desire to freely exchange ideas and find the best course of action. In addition, there is a strong sense of team membership alongside all this, which means that once the debate is finished and a decision is made, everyone will work together to achieve the goal, even if they were initially in disagreement.

Opportunities for non-EU expats are limited

People from all over the world want to live and work in the Netherlands, but before you get your hopes up, it’s important to remember that there are few opportunities in the country for non-EU citizens. A company needs to prove that there is a lack of candidates locally and within the European Union before it can hire a non-EU citizen for any job. This is quite rare, but there are certain industries that have skill shortages, and where you have a higher chance of finding a job. It’s also important to note that while English is the main language in business, and knowing Dutch isn’t usually a requirement to get a job, it certainly helps improve your chances.

Have you lived in the Netherlands? Share your experiences in the comments!