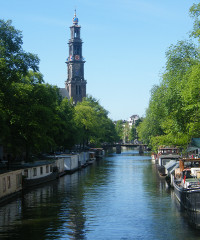 With a dense population of 16.6 million, the Netherlands is widely known as the Gateway to Europe, due to its waterway access to Belgium, France and Germany. It is rich in culture, English is widely spoken, the cost of living is cheaper than in other European countries and the climate is mild.

As well as being a hit with tourists from across the World, the Netherlands is a popular destination for expats due to the welcome it provides, which go as far as to let expats with residency status vote in local elections.

Where you reside in the Netherlands will usually depend on your personal situation and which factors are most important to your decision, for example employment, schooling, retirement issues or leisure facilities. If you enjoy culture and typical Dutch features, such as tulips, windmills and canals, then Rotterdam would not be your likely choice; however, if you want a relaxed city, Maastricht could be the ideal place for you to set up your home and new life.Some of the top Dutch cities, for a number of reasons, include:

According to a comparison of the largest 50 Municipalities in the Netherlands (the Atlas of Municipalities), Amsterdam is the best Dutch city to live in, which includes for expats. It is the capital city. Over 13% of the population in Amsterdam are made up of expats, thanks to employment opportunities at large employers such as KLM (air) and Phillips. It is the employment hub of the Netherlands. Quality of life is reported to be high, with good education and employment opportunities, low crime, a liberal attitude, high levels of tourism, an outstanding art scene and lots of culture. The report, as well as looking at the culture of each municipality, judges a number of criteria, including safety, crime, employment and accessibility. Amsterdam is renowned for its picturesque landscapes and popularity with visitors, but it is also popular with international employees and offers jobs and careers in skilled workforces.

According to a survey by Hendrik Beerda Brand Consultancy, which reviewed the reputation of various Dutch cities, Maastricht came second after Amsterdam, because of its comfortable atmosphere. The city offers a number of cultural festivities and highlights and is a relaxing city to reside in, particularly for older people who enjoy leisure and festivities, but prefer a quieter city than Amsterdam.

Utrecht is popular among expats because of its religious and cultural offerings. It boasts an ancient city center and was once the center of Christianity in the Netherlands. It offers traditional festivities and a genuinely Dutch feel.

The largest of the cities in the Netherlands, many expats gain employment in the The Hague at one of the 131 international organizations based there. It houses the Government and royal family and some call it the pulse of Europe. It has both an historical and multicultural feel to it. It is a small enough city for residents to feel comfortable. The Hague offers a number of employment opportunities, especially in governance, social policy and law (it has been called the legal capital of the world).

Rotterdam does not attract as many tourists as other parts of the Netherlands, but this appeals to the many expats who set up home there. The city was destroyed during the 2nd World War and during its rebuild, has been modernised significantly, setting it apart from other cities in the country. The canals were filled in, taking away much of its typical Dutch identity and the architecture is modern and quirky. Rotterdam is a much cheaper place to live than Amsterdam and with one of the world’s largest ports, it has a number of jobs in the shipping and logistics sector.

Overall, the Netherlands is a diverse and liberal country, offering expats a number of vibrant yet historical cities that they will settle in very quickly. A significant source of employment within the Netherlands is within the services industry and the majority of jobs exist in areas such as business services, health and welfare services, trade and transport and in the communications sector.