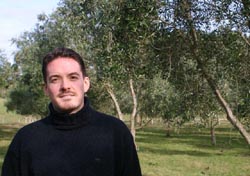 My name is Jared Gulian, and I’m still not entirely sure how I ended up living in paradise. My partner Rick and I are two American city boys who moved to rural New Zealand in 2006. We live on 20 acres with an olive grove just outside the charming wine village of Martinborough, at the bottom of the North Island.

We sell our olive oil commercially, and we commute into Wellington for our day jobs. We’ve got chickens and there are cattle and sheep grazing in our paddocks.

I write about our life on my blog Moon over Martinborough.Where, when and why did you move abroad?

Rick and I were living together in Chicago when I became restless. I had always wanted to live overseas for a year or two, but had never managed to do it. Fortunately for me, Rick said he’d join me. We moved to Japan in 1998, when we were both 31. We ended up staying a lot longer than expected.

During our time there we heard really great things about New Zealand, and we met a lot of very nice Kiwis. When we were finally ready to leave Japan, we decided to give New Zealand a try. By then we’d both fallen in love with living overseas.

We moved from Japan to New Zealand in 2003. We started out in Wellington city, but in 2006 we moved out to Martinborough, which is in the Wairarapa valley about an hour outside of Wellington.

For more about how we ended up here, read my ‘life story as recipe’ in the blog post – ‘Make your own olive oil in 23 easy steps‘

We tend to leap-frog across the planet. I moved from Chicago to Northern Japan first, then Rick joined me. Later, Rick moved down to Tokyo, then I joined him. I moved to New Zealand first, then he joined me.

The advantage is that one person can be earning an income while the other is getting a new job and getting settled. The obvious disadvantage is that you have periods of having a long distance relationship, which can be stressful.

I arrived in New Zealand with nothing but my suitcase and my CV. (We had applied for residency while living in Tokyo, so that was sorted.) I hunted around for an apartment and took the first one that seemed livable. Once I was settled with a job, Rick and I got to know Wellington and we figured out where we really wanted to live. We were living in a Wellington suburb called ‘Island Bay’ (which really does have a bay with an island in it) when Rick stumbled across our property out here in Martinborough.

I was reluctant to move out to the country at first. Rick convinced me. Read my post – ‘First time I saw the trees‘

There are expats all over New Zealand, but few Americans. Many British and South Africans.

Since we’re both relatively useless city boys who know very little about rural life, we get by with help from our neighbors. We joke that if it weren’t for the neighbors, Rick and I would have been found dead in a corner long ago. We’re part of a community out here and we give back every chance we can. We are surrounded by good people.

Check out my post – ‘The gay Americans meet the neighbors‘

This morning I helped a ‘cast sheep’ get back up off the ground. Yesterday I didn’t know what a ‘cast sheep’ was. I learn new things every day. And I’m surrounded by natural beauty. What’s not to like?

We’d like to see our families in the States more often than we do. It’s just so far away. The nieces and nephews grow so fast! But thanks to Skype we stay in touch. And we have guest rooms so we have family and friends visiting frequently. We get back to the States every 2-3 years.

Don’t expect it to be easy and perfect. Sometimes it’s really hard. Sometimes you think you’re an idiot and you should just go back to the life you knew, which was probably easier because it was familiar. But persevere. The richness this kind of experience adds to your life makes it entirely worthwhile.

Our only plan is to stay open to the opportunities that life throws in front of us. There are open doors popping up left and right, all the time. It’s up to us to have the courage to walk through them.