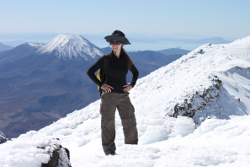 My name is Diane Morgan and I’m originally from Bergen County, New Jersey, USA. I’ve been living outside of America for nearly 10 years now but have been in New Zealand for the past four of those. I currently work for the NZ government as a business improvement advisor however before coming to NZ I used to sail on boats all over the world.

Although there are at least a million good reasons to move to NZ, including the gorgeous scenery and the laid-back nature of the people, I’m actually here because my husband (then boyfriend!) is Welsh. As it turns out, it was easier for us both to get work visas in NZ than it was to migrate to each other’s countries, so rather than endure a long distance relationship across the Atlantic while sorting out immigration issues, we moved to NZ in September 2007 to live and date like normal people. That said, I’ve always been interested in foreign cultures and love the different perspectives one gains from living in a different country.What challenges did you face during the move?

The only real challenge I faced during the move was shipping my belongings here. Because we weren’t sure where we would settle, I had packed a few boxes of clothes, photo albums, and other cherished things before I left NJ, and investigated shipping options. Once we had a permanent address, my parents took the boxes down to the shipping company, which was based at a container terminal near Newark, NJ, and filled out pages and pages of customs forms. The boxes arrived in NZ about six weeks later and I got a call to say they had been delivered to Tauranga, a city more than 500km north of Wellington! Eventually they turned up at my front door but it was a bit of a headache.

Moral of the Story: If you’re not sure how long you’re staying in NZ, don’t ship a lot of stuff down here. It’s expensive and can be a hassle.

We found a place to rent in Wellington on a popular site called Trademe (www.trademe.co.nz). It’s similar to an e-bay or Craig’s list where you can find places to rent, houses to buy, etc. It’s also a great place to find second-hand furniture. Good places to rent in Wellington are few and far between (unless you want to pay a fortune!) so it’s best to show up early for a viewing as there’s stiff competition. For some insider information on Wellington houses, please see my note down below in “What do you dislike about your expat life?”

We bought our own house in early 2010. Wellington is one of the most expensive areas in NZ for house-buying so we ended up looking at over 80 houses until we found a good one in our price range. The process of buying the house itself was a little nerve-wracking because at the very last minute, we found out that the house we were just about to buy didn’t have a “certificate of acceptance” from the Wellington City Council for some work the previous owners had done on it. Eventually, it got sorted out but it was stressful as the events unfolded.

Moral of the Story: Kiwis are a laid-back bunch and they love “Do It Yourself” house renovation. Just make sure all the boxes are ticked before buying a house because anything uncertified will become your responsibility!

Wellington is full of expats. Some of our closest friends here are Canadians, Dutch, and English. At work, we’ve also got a good mixture of Asians, Indians, and Europeans (and Kiwis of course!). Wellington is definitely a melting pot.

The Kiwis are just as friendly as the Americans so it’s not hard to make new friends and get involved in the community. One thing that has surprised me about NZ is that the Kiwis seem really willing to give everyone the benefit of the doubt. When I was looking for my first job here, I found that if you show the willingness and determination to work hard, they’re willing to give you a shot.

The Kiwis are also really honest people. Not only can you leave your belongings safely at the front of the yoga studio, but it’s also not unusual to bring an item up to the register in a store and hear the Kiwi say, “Don’t buy that here… there’s a better one across the road – and half the price!”

New Zealand is fantastic. Every corner of the country is beautiful and we love exploring the varied landscapes. The mountains down south are breathtaking but the beaches up north give them a run for their money. As for Wellington, we’re always impressed by the unlikely combination of culture, wilderness and job opportunities. For a city its size, Wellington offers a great mix of restaurants and nightlife, yet there’s a surf beach just down the road from my house! And we can still get good jobs, so it’s pretty awesome.

For the most part, there’s very little to complain about living in NZ. However there are two things to be aware of should you decide to move here. The first is that the quality of housing in NZ is generally lower than that in other Westernized countries, by which I mean that Kiwi houses are very poorly insulated. It’s hard to imagine what this actually means until you spend a winter here, but there’s nothing like being in an un-insulated Wellington house when a southerly is blowing in straight from Antarctica. If you’re renting, this can mean very large heating bills in winter!

The other downside is that moving to NZ means you are very far away from, well, most other countries in the world. I know this sounds obvious but it means that going home can be both expensive and time-consuming. From Wellington to New Jersey, you’re talking three planes, 25 hours, and nearly $3000 (NZD) per person round trip. This could impact your decision to move here permanently if you are planning on starting a family, or have aging relatives back in the States.

I think I’ve covered most of them above. Otherwise, if you’re looking for a good work-life balance and some spectacular scenery, NZ’s for you!

Good question! For the moment, we intend to carry on living and working in NZ. I’m really looking forward to summer after one of the coldest winters in Wellington’s history. We’re also hoping to take a trip home (US and UK) in the next 6-8 months, and I’m hoping for a stop in a place I’ve never visited – maybe India or Argentina. Stay tuned…