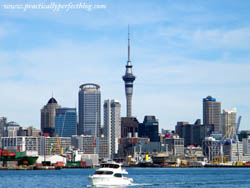 My name is Jenny. We moved to Auckland, New Zealand in May 2010. My husband, Chris, was presented with a great job opportunity, so we decided to make the move from the States and head to New Zealand.

I had never been to New Zealand, so finding first-hand information from other expats about life in Auckland was a challenge. That was, in part, why I decided to focus some of my blog on what it’s like to live here. Completing all of the necessary paperwork for my professional licensure was also a challenge, but I was able to figure everything out thanks to some helpful people both in the US and in New Zealand.How did you find somewhere to live?

We searched on TradeMe.co.nz, which is sort of like a mixture between eBay and Craigslist. Ultimately, we used a relocations firm that works with my husband’s employer. We were able to go on a tour of Auckland, see various suburbs, and find one that fit our lifestyle. From there, we looked within those select suburbs and found an apartment that met our needs.

Yes. Several have found me through my blog, and we’ve been able to meet up for coffee or tea. Sometimes it’s nothing more than a one-time interaction, but I’ve also formed some great friendships. We also know several other American expats through our church.

We both get along very well with “the locals”. This includes Kiwis and expats from countries outside of the US. Auckland is a popular place for visitors from all over the world, and we’ve had the pleasure of working and becoming friends with people of many different nationalities.

New Zealand is very family-friendly, which is great since we just had our first son, Joe, in June 2011. It’s a beautiful country with lots to explore. It’s also nice that we didn’t have to learn another language when we moved over here. People have, for the most part, been very helpful and nice, and I love the laid-back lifestyle.

While New Zealand is lovely, it’s also very far from family back in the States. It would be great if it were just a smidgen closer so that we didn’t have to take such long (and expensive!) plane rides. Auckland in particular has a high cost-of-living, so I’ve had to get used to that and adjust our budget as a result.

Search out other expat blogs, and don’t be afraid to leave comments or send emails with your questions. Most expat bloggers that I’ve come in contact with here are happy to share their knowledge.

I am planning to stay on maternity leave for the full year’s allowance that is provided to mums in New Zealand, but also pick up casual shifts when I’m able. Chris is loving his job and we are hoping to do a lot more exploring around New Zealand. We’ve been to several places in the North Island, but would love to take a tour of the South Island.