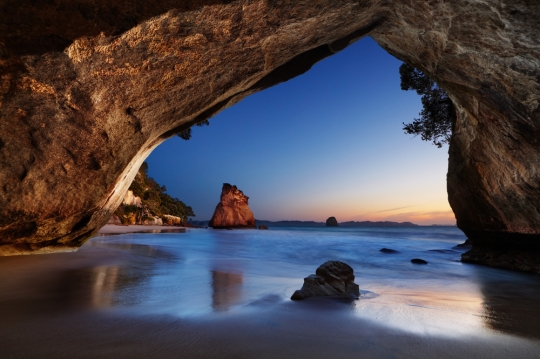 Are you looking to move Down Under to one of the most beautiful places on the planet? New Zealand is full of zest, culture, and bucket-list places to visit, meaning many expats choose it as their dream destination. If you’re considering making a move to the Trans-Tasman, here are five interesting things you might not know.

It’s likely you’ll hear about New Zealand’s Ninety Mile Beach which stretches between Cape Reinga and Kaitaia. It’s home to great waves for surfers, gorgeous sunsets, and plenty of sand dunes to make you feel like you’re visiting the desert.

But don’t be fooled, Ninety Mile Beach isn’t actually 90 miles long, it’s closer to 90km, at around 55 miles. If you fancy a road trip, take a drive up the adjacent coastal path and enjoy the beautiful views and salty air with a backdrop of crashing waves.

There are a lot of rumours about how many people and how many animals live in New Zealand, so let’s set the record straight. It’s commonly said that New Zealand is home to three million people, and 60 million sheep, meaning there would be around 20 sheep per person. However, 2015 statistics showed that approximately 4.60 million people were living in NZ, and 29.5 million sheep, meaning there was around six sheep per person. The higher stats came from historical numbers, such as 1982 when there were 703 million sheep and 3.18 million people living in New Zealand. However, there’s been a decline in the last decade on account of lower wool prices, droughts, and more competition or land.

It’s even been suggested at some points that New Zealand’s animal population was so high that only 5% of residents were people. It’s also worth pointing out that there’s plenty more space to breathe in New Zealand. While the UK and New Zealand are a similar size, their number of residents differ significantly. The UK has around 63 million people, while New Zealand has about four million.

Cheese, Butter, And Milk Are Important

New Zealand’s main export is dairy, and there are auctions every fortnight to decide the price of dairy products. It’s been suggested that New Zealand exports around 100kg of butter and 65kg of cheese per person, per year.

In fact, New Zealand dairy exports jumped by $1.65 billion in June on the year making the annual figure a total of $14.16 billion.

Kiwis Give Their Name To Several Things

You may have heard folk of New Zealand being referred to as Kiwis, but did you know the currency is too? People Down Under have been endearingly called Kiwis as the curious little Kiwi bird has become the national symbol over the years. Don’t be surprised if you hear the term ‘Kiwi dollar’ from time to time; it gets its name from the coins which have the Kiwi birds printed on them.

The smallest monetary denomination is 10 cents. There are other famous birds in New NZ such as the kea, but you might find them less likeable due to their habits of pulling car windscreen wipers off and eating rubber strips from windows.

There's A Lord of the Rings Minister

The filming of Lord of the Rings in New Zealand brought in around $200 million for the economy. Not wanting to sell themselves short, the Kiwi government forged a new role, the Minister for Lord of the Rings. Pete Hodgson took the position and was responsible for squeezing as much juice out of the franchise, directed by fellow Kiwi Peter Jackson, as he could. He had to raise New Zealand’s profile across the globe, working with institutions such as Tourism New Zealand, Trade New Zealand, and the Film Commission.

Interestingly, this came sometime after the New Zealand Prime Minister appointed a National Wizard in 1990. If you’re wondering what his role in society is, the Wizard’s contract states: ‘To wear the appropriate regalia and be required to carry out the duties of national Wizard, namely to protect the Government, to bless new enterprises, cast out evil spirits, upset fanatics, cheer up the population, attract tourists and in particular to design and promote a new and improved universe which puts New Zealand on top of the world both physically and metaphysically.’ It seems like a big task for one man, but we wish him luck!