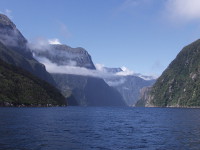 New Zealand is an English speaking country, with a good climate, spacious and luscious landscape/scenery and a good quality of life. In fact, the number one dilemma facing people who have chosen to move to the country is whether to locate in the North or South island, as both are arguably great choices for working and settling in a new life.

In New Zealand they offer Brits (under the age of 30) the chance to apply for a working holiday visa (lasting up to two years) and there is a need for various skilled workers. With a number of factors pointing to New Zealand as a good bet for expats, the question is where in the country to reside.About the North Island

The North is separated from the South Island by Cook Strait. Approximately 77% of New Zealand’s population lives in the North Island and cities include Auckland and Wellington. The island is 113,729 square kilometres (43,911 square miles) in area and the 14th largest island in the world. It has a higher population than the South, with approximately 3,393,900 people. If you prefer more people and a livelier atmosphere, the North is arguable better than the South.

People also tend to opt for the North if they prefer beaches, bays and the surf lifestyle as the water and climate tend to be warmer and more pleasant.

A number of New Zealand’s tourist attractions lie in the North, for example Auckland Harbour Bridge and the Sky Tower which can be great for when you first arrive in New Zealand and want to explore, and for visiting relatives and friends. In addition, tourists often opt for the North because of its greater culture (experiencing Maori ways).

In terms of lively nightlife and a good choice of dining options, the North offers a lot to visitors and residents, again thanks to the greater population and busier cities.

About the South Island

The south is larger in area than the North and is referred to as the ‘Mainland.’ 24% of New Zealand’s 4.4 million inhabitants live in the South Island. During the late 1800s the reverse was the case but the North has steadily overtaken the South in population since then. The South covers 150,437 square kilometres (58,084 square miles). The fact that the South covers a wider area but has less people, often appeals to expats who prefer a quieter lifestyle and enjoy large, empty scenery and tranquillity.

The Southern Alps cover the length of the South Island and it is ideal for skiing. The South is more mountainous than the North. In fact, the South is said to be more ‘adventurous,’ in particular Queenstown, and would suit people who enjoy an active, outdoors lifestyle.

As well as the extra space, some people prefer the diverse nature that the South Island offers. There is unique wildlife and spectacular National Parks, not to mention world-class wine (and vineyards).

The climate in New Zealand is very diverse and varies greatly from the top of the North to the bottom of the South. The North Island generally has a warmer and wetter climate than the South.

There are a number of cities in the North and South Island, although for a city they feel smaller and friendlier than others across the globe. New Zealand, on the whole, has a rural feel to it. If you are working in New Zealand, commuting is said to be easier and less stressful than in other countries, thanks to the space on the roads – especially in the South, where the population is less dense.

Fortunately, if you are choosing New Zealand for your new life, the chances are you will have plenty of opportunity to explore the North and South Islands over time, regardless of which you choose to live and work in. New Zealand has become a hotspot for expatriates, thanks to its excellent healthcare and education, outdoors lifestyle and beautiful landscapes. Both the North and South offer these things in absolute abundance.