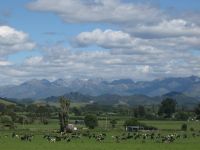 Despite New Zealand’s limited manufacturing and IT sectors, the country has much to recommend it as a workplace: whatever the local portrait of economic diversity may be, New Zealand was rated by the International Herald Tribune as the “most business-friendly country in the world”, and more recently as number three in the World Bank’s “Ease of Doing Business” rankings (edged out only by Singapore and Hong Kong). New Zealand workers’ salaries are fairly competitive, with the average hourly wage in the private sector being $25.42 in local currency, and average weekly earnings of around $1,320. Many other economic indicators for New Zealand are also very positive, such as last year’s 7% reduction in the number of unemployed (a number which places it among the best of the developed nations).

However, factors such as the cost of living and lack of obstructions to commerce are not the only draws to the country, and few “Kiwis” would make these the only items on a list of the best things about New Zealand life. One of New Zealand’s most lucrative industries – tourism – will probably hint at another reason that many see it as a great country to relocate to. The islands’ stunning natural beauty, and the local commitment to stewardship of this environment, are in a class all of their own.The varied, often breathtaking natural landscape of New Zealand is an aspect of the nation that makes it an attractive choice for those who have grown weary of living in the comparatively more congested financial hubs of the globe. There are many other ‘intangibles’ that make relocation to New Zealand a good idea, such as the unique sense of humor that the locals have developed to deal with their geographic isolation.

There are a number of competitive homegrown or locally owned industries operative in New Zealand, including organic food producers, forestry concerns and real estate companies (e.g. Harcourts). Food production – organic or no – counts as a solid chunk of New Zealand’s total exports, with dairy and meat products having more than a 25% share of such. Despite having just mentioned the country’s lack of involvement in information technologies, it nonetheless has software exporters like Orion Health, a 900-employee operation that is hoping to break the $1 billion revenue mark by the start of the next decade.

Software developers – already the job description that dominates Orion’s workforce – are still being sought out by the company as it inches towards this goal. To take things straight from the horse’s mouth, the company’s human resources director, Jonathan Pulman, claims “[Orion] want developers with a strong base in Java and web development skills. People who have worked at development houses before, who understand how it works, will be strong contenders". The company's realization that there is a local "skills shortage" is practically an admission that help will be sought from outside of New Zealand, so opportunities with this firm and other local software developers should be given a serious look.

The same holds true even for local companies that are downsizing, such as Gen-I, yet are nevertheless looking for new workers with highly specified skills during this process of organizational consolidation. This company is particularly seeking out Cisco / Citrix engineers, and 4G mobile application designers.

It might also be worth your while to narrow down your New Zealand job search by city, as each seems to have its own unique business profile. The capital city of Wellington is always hiring in the public sector, though the governmental / administrative nature of these jobs makes them unsuitable to expats. However, this city is a potential home to energy industry professionals, since New Zealand's branch of British Petroleum, which employs around 1,200 workers across the country. Another local energy provider, Contact Energy, is based here and accounts for 500 employees spread across ten power stations in the country.

Among some of the major multinational companies represented in New Zealand are Chubb Security, Farmers Insurance, and Vodafone (all in Auckland), and Cadbury (in Dunedin). Though it is difficult for us to tell what each of these employers' relocation policies may be, you may want to inquire with a human resources official if you are already employed with one of these firms and interested in relocation to NZ. Meanwhile, experience with a multinational food services company might come in useful in applying to a local organization like Restaurants Brands Limited, which operates the NZ franchises for Starbucks Coffee, KFC and Pizza Hut.