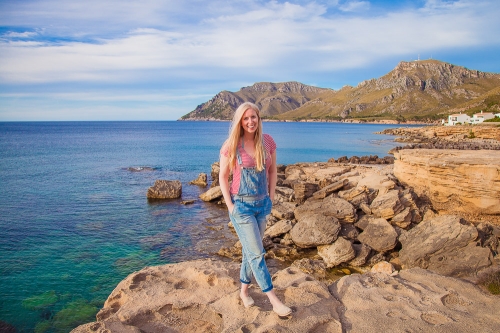 I’m an American living in Norway and working as a travel blogger at Heart My Backpack.

When I finished university I moved to Japan, where I worked as an English teacher for 2 years.Then I moved to Thailand for 2 years to work with Burmese refugees, and now for the past 2 years I’m living in Norway – though this time I intend to stay much longer than 2 years! I never felt like I wanted to live in the US growing up, but I wasn’t exactly sure where I did want to live, so I’ve spent a lot of time working different jobs in different countries trying to figure that out. I’ve traveled to about 80 countries and lived in 7, so I’ve been testing things out quite a bit! Now that I blog full time I have the flexibility to live anywhere, but I think I’m going to stay in Norway.

Norwegians are often quite shy and slow to welcome people, so it took me a while to feel integrated into the community here. But now I have a lovely group of friends, so it really just took some time.

I live in a village of about 1,000 people up in the mountains, so there aren’t really any other expats here (besides my British boyfriend who moved here with me). But there is a very small university nearby which draws in some international students, so I do sometimes hang out with other foreigners too.

I love how beautiful the Norwegian mountains are, and how much the locals seem to appreciate living in the nature. People work quite short days and there’s a lot more emphasis on life outside of work than people’s careers, which I think is really healthy.

Sometimes trying to get things done in Norway can be really frustrating, because as I said, people don’t take work too seriously so there isn’t a great deal of customer service here. If people don’t know the answers to my questions they’ll just say they don’t know instead of trying to find out a solution. It usually works out in the end somehow though!

People here take life a lot more slowly than in Boston. And as Norway is such a wealthy country, people place a lot less focus on jobs and careers, as wages tend to be fairly similar regardless of what work you do here. It’s also a much quieter country – Norway is huge with a very small population, plus Norwegians themselves tend to be quite quiet.

Haha Norway isn’t exactly famous for its cuisine, but I actually really like Norwegian food! It’s basically like comfort food, I guess partly because it’s so cold here. I also really love fish, which is a big part of the diet here.

My one complaint would be that alcohol is so expensive here, which means that people don’t seem to drink lightly but instead when they do drink they drink a lot. There’s no such thing as just going to a pub for a beer with your friends here – when people go drinking they really go drinking! It’s not really fun going out at night here because people just get so drunk.

Be patient with the whole moving process! I mean that in terms of being patient with the bureaucracy of your move, but also with things like making friends and learning the language. If you are easy on yourself with your expectations then you won’t feel as stressed or worried when things don’t go exactly as planned (and they probably won’t). Instead just try to enjoy the whole process!

I’m planning on keeping Norway as my base while I continue travel blogging. I usually travel for about two weeks each month, but I love coming home to Norway and I would love to build a permanent home here eventually.

You can keep up to date with Silvia's adventures on her blog, Heart My Backpack.