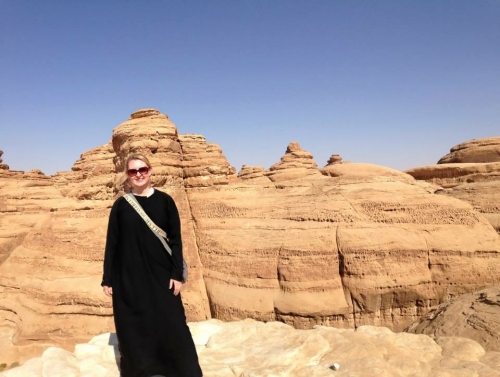 I’m Kristine, a Canadian nurse who currently lives and works in Saudi Arabia. I’ve spend most of my career working outisde of Canada- about 10 years in the US over the years and just over 4 years in the Middle East.Where, when and why did you move abroad?

I first moved to Riyadh, Saudi Arabia back in 2010 and stayed for 15 months. I then returned in 2014 for 2 years, and then came back a third time in February of this year after taking off 5 months to travel. I came to Saudi Arabia the first time looking for an adventure. The Middle East had always fascinated me and I wanted to experience the culture first hand. I also recieve nearly 2 months of paid vacation per year and the travel is really what keeps me coming back. Saudi Arabia is a great base to easily get to Europe, Asia and Africa so the travel opportunites are endless.

Well as you might imagine Middle Eastern culture for a western woman couldn’t be more different than how I grew up. For me the language wasn’t a huge issue as the hospital I work in is English speaking and many of the patients I look after speak English. Women in Saudi Arabia are not allowed to drive so it’s a bit of an adjustement to rely on a driver to take you everywhere- I do miss the freedom of being able to drive myself where I want to go.

Prayer time also took some getting used to. Here in Saudi Arabia everything closes during prayer time and prayer time changes slghtly everyday so whenever I go grocery shopping or out to eat I need to be aware of when prayer is.

Also living in Saudi Arabia requires a great deal of patience – things often do not go as smoothly as they would back home. Opening hours and work hours especially are often more of a suggestion, so it’s not uncommon to show up somewhere and the office isn’t open, or the person is 2 hours late to work, or they took an extra long coffee break and now it’s prayer time, and all you can do is take a deep breath and wait…

There are tons of expats in Saudi Arabia. The vast majority of the nurses at the large hospital I work at are expats, although westerners are still the minority. You will see expats at the grocery store, and malls and out eating in the restaurants. There’s quite the expat social scene with sporting events, embassy functions, and hiking groups so it’s pretty easy to meet people!

Well in a lot of ways my life in Saudi Arabia is pretty easy. I don’t have to pay rent or utilities. There’s a gym and a pool at my apartment. Since it’s illegal for women to drive I don’t have a car payment, or have to worry about getting a flat tire or getting the oil changed.

I love that I’m only a relatively short plane ride away from Europe or other destinations in the Middle East which is a nice change from living on the west coast of North America where Europe and Asia are very long flights. I love how multicultural Saudi Arabia is. That in any given working day I can be mixing with hospital staff from New Zealand, Ireland, Australia, the US, India, Britain, Ethiopia, Sudan, the Philippines, India, and Malaysia just to name a few.

As I’ve previously mentioned not being free to take myself where I want to go gets frustrating at times. Sometimes it’s hard being so far from home and that can take its toll on relationships. Saudi Arabia is a pretty transient place – for most westerners it’s a stopping off point to somewhere else so people are always coming and going. Sometimes it can be difficult parting ways with people you’ve bonded with.

Sometimes I get frustrated with having to wear an abaya as a woman, the fact that alcohol is illegal, that there are no movie theatres, and that dating here is difficult. But, mostly I just accept it as part of the culture of the country I chose to live in.

I think the biggest cultural difference is how intermixed culture and religion are here in Saudi Arabia. Religion governs many aspects of daily life which is quite different as compared to back home. As I mentioned here shops close several times a day, every day for prayer time which is quite different from back home where shops might be closed on Sunday and people go to church once a week if that. Also there are a lot more rules and restrictions especially for women as compared to back home.

Saudi Arabia has really embraced western culture in terms of food. There are McDonald’s and Starbucks and many American chain restaurants. Literally everywhere. Saudis love to drink Arabic coffee and dates – I don’t mind the dates but I’m not a huge fan of Arabic coffee – it’s too bitter for me. Kabsa is a very traditional Arabic meal consisting of basmati rice with spices and chicken, goat or camel. Yes camel. I’m a big fan of Arabian breakfast which often has shashukah, an egg dish with tomatoes, falafel and hummus, or a bean dish called foul.

Well as I’ve mentioned I’ve definitely learned the art of patience living in Saudi Arabia. I’ve also learned to keep an open mind as people and the culture can surprise you. I’ve learned that the world is both big and small at the same time. That even though our home cultures are vastly different people are often kind and caring, and that if you keep a positive attitude then usually positive things will happen. Equally so, that if you have a negative attitude it’s hard to not spend your time here being anything but miserable.

Just keep an open mind, and as hard as it is don’t compare everything to how things are “back home” because you’re not back home anymore are you? Be open to new adventures and experiences. Embrace the culture. I think a lot of expats come to Saudi Arabia and live within a bubble between work and their western style compound. There’s so much to explore within the country and the best experiences I’ve had here have been visiting historical sites and attending cultural festivals. Just make the most of it!

Oh how I wish I knew! I’m sure in the next year or so I’ll make my way back to North America, but I’ve yet to narrow down if I’ll return to Canada or the US. It’s all very much up in the air at this point!

You can keep up to date with Kristine's adventures on her blog, Kristine Wanders.