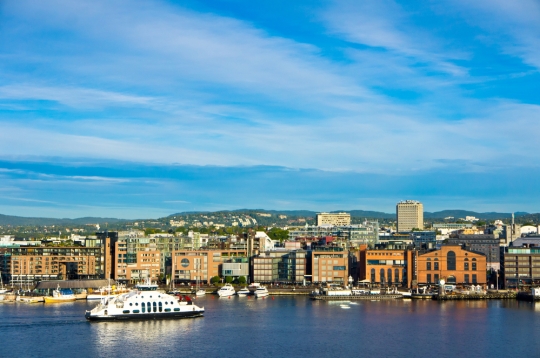 Norway’s capital has a reputation for being a great place to raise a family. The clean, safe city life is complimented by a national love of the great outdoors and ready access to Oslofjord.In summer, the hills and islands are an adventure playground for young and old alike, transforming into a skier’s paradise when the winter snows arrive. With a 33-hour working week, 21 days of paid leave and high levels of job flexibility, most families have plenty of time to enjoy a life that is more than all work and no play.

However, it’s not just the grown-ups who benefit from Norway’s liberal lifestyle. Youngsters in the country’s school system not only perform well in academic terms, but also enjoy greater social equality between genders, which can translate to lower levels of social anxiety and above average feelings of belonging.

These results may be due to the fact that Norwegian children start socialising early. Oslo alone covers six different types of daycare for preschool youngsters, often catering for newborns when parents return to part-time work. This government-subsidised daycare isn’t strictly schooling, but it does help children get used to being around others and can help to build confidence.

The school system proper doesn’t kick in until the sage of six, when barneskole or elementary school begins. At age 13, pupils transfer to ungdomsskole, a lower secondary school, where they remain until the age of 16. Although mandatory education stops at 16, education is fully funded all the way through university to PhD level. This means that most pupils will continue on to the upper level of secondary schooling, videregående skole, with a view to going on to university.

Oslo’s schools all follow the Norwegian national curriculum, covering Norwegian, maths, science and the environment, music, religion and English plus some other compulsory subjects and study projects. Higher secondary school is much more vocational, with pupils picking subjects that complement their future ambitions.

Although the Norwegian system is well regarded around the world, it does have one problem for expat kids; most of the teaching is done in Norwegian.

Unless your child is a linguistic genius or has a good grip of the language already, it could be a challenging for them to undertake their studies in Norwegian. Instead, a number of international schools are available in Oslo.

These schools can be pricey, but they have outstanding reputations. Importantly, they also offer a familiar teaching environment for expats’ children.

Teaching takes place in familiar languages, with schools dedicated to French, German and English. These schools also offer qualifications that will be recognised at home. The International Baccalaureate is available in most and some even offer international equivalents of the UK’s GCSE scheme.

Choosing a school can be one of the most important decisions to influence a child’s future. This is especially important if the child in question is likely to move again before their schooling is complete.

We’ve looked at the factors you need to consider when thinking about expat schooling in Oslo.

What does the grapevine say?

Oslo’s large expat population will have its thoughts on the options available and will likely have advice on how best to approach the process of enrolling.

How long have you got?

Some expat assignments come at short notice, which can be an issue when the best schools in Oslo often have long waiting lists. The earlier you can apply, the better your chances of getting a spot at your preferred school.

What about alternative schools?

For the first years of schooling, Norwegian people are open to Montessori, Steiner and schools influenced by other educational theorists. Consequently, state and private schools may offer various different ways of teaching. Research these methods to work out if they are right for your youngster’s learning style.

What subjects are on offer?

Although all schools will follow the same basic curriculum, there are differences in the elective subjects on offer. This is especially true in higher secondary school. Talk to your child to find out where their ambitions lie and what subjects are their strengths.

What does your remuneration package include?

For some, this will include support with finding schooling appropriate for the family. This may be a cash allowance or reduced fees at particular schools. Research this option carefully to find out what you are entitled to.

What qualifications are on offer?

It’s not just a case of looking at what subjects are on offer, but whether the qualifications on offer are appropriate. If you intend to stay in Norway, the state system would be best, but if future moves around Europe are on the horizon, the Baccalaureate promises the best in terms of continuity.

What about religious schools?

Norwegian law used to stipulate that private secondary schools would be illegal unless they offered a “religious or pedagogic alternative”. Simply put, this means that the majority of Oslo’s public schools have a Christian foundation.

How is their Norwegian?

Swapping schools can be daunting enough, so imagine also being overwhelmed with a strange new language at the same time. Although Norwegians are typically fluent in English, studying in state schools is done in their own language. International schools work almost entirely in one selected language, but private schools may work in a mixture of Norwegian and others.

What can you afford?

State education is free and covers some of the most generous conditions for study anywhere in the world. International schools are perfect for expats but can be prohibitively expensive. Private schools are often somewhere in between.

Pick the right school for your child

Ultimately, the school which looks best on paper may turn out to be all wrong for the child in question. A visit or two may be the only way to tell you whether a school’s atmosphere, curriculum and ethos are right for your youngster.

Have you lived in Norway? Share your experiences in the comments below, or answer the questions here to be featured in an interview!