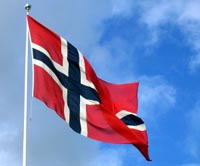 The official language of Norway is Norwegian, however Swedish, Danish and English are also commonly spoken. In fact, many Norwegians are quite fluent in English, as well as German and French.

Norwegians do not usually expect foreigners to converse fluently with them in their language, but it may help to familiarize yourself with a few common Norwegian words and phrases. This is helpful when travelling around the country and also makes it easier to settle into the culture. Some basic Norwegian phrases include snakker du engelsk? (Do you speak English?), jeg heter… (My name is…) and jeg kommer fra…(I come from…).When greeting someone, you can say hallo (hello) or hei (hi) or hvordan går det (How are you). Other phrases you may feel the need to use while talking to locals include unnskyld (excuse me), beklager (sorry) and ha det bra (goodbye).

One of the best ways to learn a new language quickly is to keep practicing by incorporating it into your daily life. So, ask your colleagues and friends to converse with you in Norwegian, read the local newspapers or listen to Norwegian radio stations. When listening to someone speak in Norwegian, pay attention to the inflection of the verbs and how it is used in different contexts. Instead of spending too much time learning words and phrases you most likely will not need initially, learn up the numbers and pronouns as these come into play even in basic conversations.

Apart from the native language, each culture has its own etiquette and customs by which they communicate with each other. In Norway, people like to greet each other casually, keeping direct eye contact and smiling. A firm handshake also helps to strike a connection with someone you are meeting for the first time. The Norwegian culture is egalitarian and the locals almost always introduce themselves casually using their first name. In certain circumstances, you may prefer to use the more formal title of Herr (Mr.) or Fru (Mrs.) along with the surname. When greeting or bidding farewell, shaking hands and saying a simple goodbye individually is the preferred custom.

Striking up a conversation

Some of the topics Norwegians usually enjoy talking about include sports such as football, rally driving or cross country skiing. Folk music is also very popular among the locals and there are many famous Norwegian composers and musicians that have captured the hearts of the locals. You can also make a reference to the Nobel Prize, which is a well-known aspect of Norwegian culture and something that invokes the pride of the people of Norway. When getting to know new people from a different culture, its best to steer clear of certain topics that may be provocative or offensive. Therefore avoid any criticism of the government or culture of the country. Since egalitarianism is an important characteristic of the land, avoid any demonstrations of rank or status, or comparisons between wages earned in Norway and other countries.

Some other things you should know about the Norwegians are that they are a punctual lot and appreciate it when others are punctual too. They are also not overly demonstrative with their body language. They may also be put off when others behave in a loud or overly expressive manner. It is generally appreciated it when foreigners are aware of the differences between various Scandinavian nations and are able to distinguish between the people and culture of Norway and other countries like Sweden, Denmark and Finland.

Norwegians are quite private people and prefer to keep their personal lives separate and they similarly respect the privacy of others. So don’t feel offended if they refrain from asking you too many questions about your life. Its common for many Norwegians to have two given names, both of which comprise the first name. It’s advisable to use both when addressing them and not shorten them. Once you get to know them, Norwegians are a friendly and hospitable people. Arriving on time and bringing wine or flowers is the preferred custom if you are invited to their homes. Norwegians toast each other by saying ‘skål’ (pronounced as ‘skoal’) and the custom is to sip your drink after your host or hostess has said it.