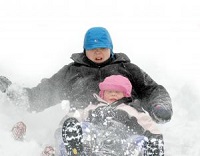 Expats moving to “the land of the midnight sun” are usually apprehensive about the severe weather conditions they may have to face, since the Northern part of Norway shares the same latitude as Siberia, Alaska and Greenland. The common belief is that this Scandinavian country is always cold and wet like the others. However, Norway’s climate is very different from season to season and varies greatly between regions. Moreover, its coastline is warmed by the Gulf Stream to a great extent. Fortunately, Norwegian winters are much milder than its neighboring countries. However, it is best for visitors to be prepared for all the seasons beforehand.Even the locals in Norway keep themselves abreast of weather reports at all times, because the weather is very dynamic and its severity determines what they can or should not do on a given day.

Norwegian summers generally last from June to August; during this time the days are long and warm, with the temperatures going as high as 25ᵒ C to 30ᵒ C in certain areas. June and July are the warmest months across most regions. Summer in Fjord Norway, Trondelag and Northern Norway is changeable. These areas are relatively cool and wet compared to the others.

The sun sits low on the Northern Norway sky during these months, and it can therefore be quite strong in some areas. The midnight sun is often seen in summer from above the Arctic Circle. It is almost like there is no night time in this region during this period of the year. The North has 24 hours of sunlight during summer and the south gets about 16 hours or so.

Swimming and canoeing have become a popular summer pastimes in certain regions, since the sea temperature reaches 18ᵒ C or higher. Trekking, hiking and biking are also common summer activities.

Summer wear usually includes t-shirts and shorts for men and sundresses for women. Many people wear light sweaters or jackets that are wind-proof and water-repellant throughout the day, but do away with scarves, hats and gloves. Visitors are advised to pack their sunglasses for the warm months.

September brings about a drop in the temperature, which could range anywhere between 15ᵒ C and 20ᵒ C. The loss of heat is greater in the land areas compared to the sea, and the coastal regions therefore record the highest autumn temperatures. In Norway, autumn generally begins in September and lasts until November.

The days gradually get shorter as the sky becomes dark in the afternoon or evening. On brighter days, the Norwegian landscape looks like it has been painted red, orange, yellow and gold.

The most common autumn pastime in several regions of Norway is berry- and mushroom-picking. Water rafting and kayaking are often practiced by the locals in the coastal areas. People dress up in at least two or three layers of clothing during these months.

From December to March, most of the regions in Norway seem to transform into a winter wonderland. During these months, the average high temperature is around -1ᵒ C, but it could easily drop below -10ᵒ C. Across most regions, January is the coldest month of the year, with an average temperature of -12ᵒ C.

Throughout winter, the northern region gets only an hour of daylight or less; this phenomenon is known as Polar Night. The southern part gets about 6 hours of daylight during the cold months.

Heavy snowfall, rain and gales often restrain people from venturing outdoors. Norway has seen a few fierce blizzards in recent years, even in the coastal areas. When the weather permits, locals and tourists participate in various forms of winter sports such as skiing, tobogganing, sledging, and skating.

Dressing up for the winter in Norway usually includes layering for better insulation. In addition to thermal inner wear, people often bundle up in cardigans, coats and long jackets. On most days it becomes necessary to wear scarves, gloves, socks and hats to prevent frostbite when going outdoors.

In April, the days start getting a bit warmer and the temperature ranges between 5ᵒ C and 15ᵒ C. Nevertheless, during these months, the weather remains varied and unpredictable. Some days are bright and sunny, while on others it could snow. People also experience several windy days throughout spring. During this time of the year, the difference between daytime and nighttime temperatures is the highest.

The snow and ice collected through winter begins to melt in spring, creating natural waterfalls in several places. The availability of water and sunlight encourages people to participate in various outdoor activities. It is best to dress up in at least two or three layers of clothing even in the spring months.