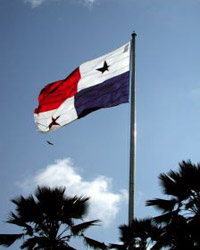 Food is a very important aspect of the culture in Panama. This country’s cuisine is a melting pot of Spanish, Native American, African and Caribbean food, and North Americans and Europeans tend to enjoy the mild flavor of many typical Panamanian delicacies. Some of the most common ingredients used for cooking in Panama include corn, maize, wheat flour, rice, yucca, plantains, beef, pork, seafood and chicken. Given below are 5 popular foods that you must try during your stay in Panama:

An empanada is a baked (or sometimes fried) pastry that has been filled with meat, vegetables and cheese.It is easily available at any time of the day at most eating establishments in Panama.

This popular starter is prepared by rolling out some pastry dough and placing a small amount of cooked stuffing in the middle. The dough is then folded to form a semi circle that envelops the filling. The edges are pressed down by running a fork all around. The top of the empanada is brushed with a beaten egg and the pastry is then baked till it is crisp and golden-brown.

While savories like beef, chorizo, shrimp, corn, cheese and veggies are the preferred choice of stuffing, certain establishments serve sweet empanadas that have been filled with fruit and preserve.

Sancocho can be described as a traditional chicken soup or stew that consists of meat and vegetables cooked in a flavorful broth. The locals regard this dish as comfort food as well as a remedy for a hangover. If Panama had a national dish it would definitely be Sancocho.

This main is prepared by marinating the chicken in all the spices/herbs for a few hours and cooking it over a low flame for a while. Once the meat is cooked, some stock, onions and roots are added to the dish, and all of them are cooked together. The stew can be seasoned in many ways. The basic ingredients used in this Panamanian delicacy are chicken, tomatoes, chili peppers, ñame (a thickener), culantro, yucca, otoe and mazorca (corn on the cob). Optional ingredients include ñampi (a variety of taro), beef, bacon, oregano, garlic and onion.

Sancocho is generally eaten with white rice or other accompaniments like sliced avocado and fried plantains.

Ceviche is a seafood preparation commonly consumed all across the country. It is available at most restaurants as an appetizer.

This dish is made from fresh raw fish that has been cured in lime or lemon juice for at least 3 to 4 hours. Most traditional cooks prefer marinating the fish overnight. Once the fish has been “cooked” in the citric acid, salt, onions, peppers, coriander and tomatoes are added. Ceviche is generally served cold or at room temperature with fresh tortilla chips.

There are a few variations of this dish available in Panama. At some establishments, ceviche is made with shrimp, octopus and squid instead of fish.

Literally translated, Ropa Vieja means “old clothes”. In spite of its unappetizing name, this hearty dish is a hot favorite with a majority of the Panamanian population.

Ropa Vieja is made from beef, stock, tomatoes, chopped onions, garlic, herbs and spices. The meat is cooked for an hour or till it can be easily shredded with a fork. Traditional families let the beef cook with the other ingredients for several hours before mixing in the rice. The dish should be eaten immediately, while it is still hot.

In some restaurants, ropa vieja is served without the rice. The accompaniments you can choose from include soft tortillas or some crusty bread.

Like the name suggests, Pastel Tres Leche comprises of a cake that has been soaked in three different types of milk: condensed milk, evaporated milk and heavy cream. This dessert is quite popular with Europeans, as it compares favorably to English Trifle and Italian Tiramisu.

Tres Leche cake is unlike normal sponge cake soaked in milk – it is much lighter and has more air bubbles in it, as it is made without butter. Because of its distinct texture, it doesn’t get soggy even after being soaked in a mixture of three types of milk.

Some other popular Panamanian delicacies that are definitely worth a try include Hojaldras, Gallo Pinto, Tamales, Chicharrones, Patacones, Carimanolas, Yuca Frita, Corvina and Arroz Con Pollo. In addition, each year, Panama receives thousands of expats and tourists from every corner of the world, and it is therefore quite easy to find opportunities to try Chinese, Italian, Thai, Japanese, Middle Eastern and French food in this country.