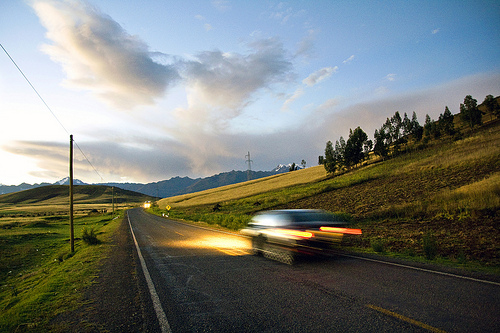 Peru houses a multi-ethnic society and although the language most widely spoken is Spanish, portions of the population also speak native languages. Peru is perhaps most famous worldwide its rich ancient history dating back to the Inca Empire. Today it stands as a developing nation with one of the fastest growing economies in the world. If you’re thinking about moving there, here are some helpful tips for expats driving in Peru.Expats are permitted to use an international license to drive in Peru. But this is only for a period of six months, after which they must obtain a Peruvian driving license. The process of acquiring a Peruvian driving license involves taking medical and psychological exams at a center approved by the Ministry of Transport and Communication, followed by a written test. Two passport size photographs, and both a copy and the original versions of your passport and residence card are also required.

Expats are advised to carry their passport at all times when driving.

Protests and demonstrations commonly take place in Peru and often lead to road obstructions. It is a good idea to check the local news before trying to drive through a blockade. The locals are also a great source of useful tips about the situation on the streets. If you do need to drive in close proximity to a protest or demonstration, exercise caution and avoid attempting to pass a blockade.

Expats, especially from the United States and Europe, will find that driving conditions in Peru are quite different. Drivers commonly ignore traffic lights and stop signs. Crashes have been known to occur frequently and drivers rarely look out for pedestrians. Expats new to Peru are advised to familiarise themselves with the local driving laws and practices before driving on the country’s roads.

Driving standards in Peru are poor and many local drivers have little regard for traffic rules. A common occurrence expats will notice is that drivers always appear to speed up at an amber light, instead of slowing down. So, be especially careful at crossings, and more so at night when drivers sometimes completely ignore traffic lights.

Bus crashes in Peru are not rare. Drivers often try to pass by or overtake other vehicles, especially at night. This is riskier in the remote and mountainous areas.

A number of the minor routes in the country are unpaved and therefore the monsoon season during November to April leads to flooding. Landslides may sometimes block the major routes. Check the weather conditions before setting out to avoid any incidents.

Some roads are poorly lit and those who are new to driving in Peru may want to avoid driving at nighttime. Road hazards are also frequently unmarked and pose a risk for passing vehicles at night.

If you are planning to drive on Peru’s mountain roads, be aware that many of these roads do not have proper guard rails. If you are driving along the coastal areas, prepare for foggy conditions, which require extra caution.

Many male drivers on Peru’s roads display macho, aggressive behavior behind the wheel. This means that they may drive extremely close to vehicles either while behind them or while passing by. They also tend to challenge other drivers by speeding up or cutting them off.

If you are signaled by the police to stop, pull over and remain in your car. Your driver’s license and other documents cannot be impounded. If there has been a traffic violation, you can pay your fine at the Banco de la Nación.