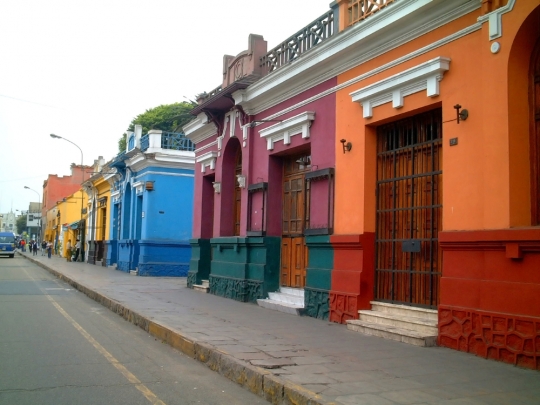 Lima is the capital of Peru, and one of the largest cities in South America. Given its size, it is unsurprising that Lima is home to a lot of LGBT+ life. However, given that it is also a Peruvian city, views towards queer people can be very conservative compared to more liberal parts of the world.Nonetheless, Lima can be a welcoming place for LGBT+ people if you know how to navigate the scene and where to go to meet people.

Understanding the legal situation in Peru and what challenges you may face as an LGBT+ person moving there is key to making your transition smooth. Officially, marriages between two people of the same sex performed outside of Peru are not recognised in the country, but this may soon change, as there has been precedent for migrants appealing to the highest Peruvian courts to have their marriages recognised. It’s also possible that marriage equality will come in full to Peru very soon, so watch this space.

In terms of legal protections for LGBT+ people, Peru’s record is not so good. It is currently one of three countries in South America with no explicit laws to prohibit discrimination or hate crimes against LGBT+ people, meaning that technically, living in Peru, you could be evicted from your home, fired from your job or refused service because of your sexual orientation or gender identity. In reality, this is unlikely to happen to expats living in Peru, as the attitude towards LGBT+ people who are not Peruvian is much more laissez-faire. This is an unfortunate double standard that you will likely notice in many areas.

Since 2016, trans people in Peru have had the right to legally change their gender without the need for surgery. However, if you’re moving to Peru as a trans person, it will likely be considerably easier to have the legal change already made on your home country’s documents so that the Peruvian government will immediately recognise you under your identified gender and name.

Going Out in LGBT+ Lima

Lima is a huge, sprawling city with dozens of distinct neighbourhoods to explore, some of which are reputed not to be safe. Miraflores and Barranco in the south are the most affluent and arguably the nicest areas to live and go out, but there are many places of interest dotted around the city.

Unfortunately, public transport in Lima is not very well developed; there are two independent metro systems which use different ticketing systems and form two parallel north-south lines through the city. Buses are everywhere, but the system can be confusing as there’s a lack of signage and timetables in most places. However, official taxis are affordable, safe and easy to come by; just make sure you agree on the price with the driver before starting your journey.

When it comes to everyday life for LGBT+ people in Lima, there are several options for safe, welcoming queer spaces for going out. Although these spaces are usually aimed at gay men, everyone is welcome at most of these venues.

Vale Todo is by far the best known and most popular gay club in town, located in the pleasant Miraflores. The club has free entry and hosts regular themed events, often with famous guest performers. Legendaris, also in Miraflores, while much smaller, has a friendly, welcoming vibe and hosts bawdy shows with lots of audience participation. The trendy Lola Bar, also in Miraflores, is a pretty mixed venue during the week, but at weekends is decidedly gay; bring your most flamboyant moves to the dancefloor here!

In the neighbourhood of San Borja, La Cueva is a fun, cheesy place for a night out; come for a casual drink, to play gay bingo or dance all night long. The club is an easy-going, open place. The only real option for LGBT+ nightlife in downtown Lima is Sagitario, an unpretentious bar and club with cheap, strong drinks where local people come to really let their hair down. Avenida 13 in the less touristy neighbourhood of Lince is one of the city’s only lesbian bars. It has a welcoming, fun atmosphere and usually features female DJs.

Although there are several smaller events throughout the year, undoubtedly the two most important happenings in Lima’s LGBT+ calendar are the OutFest and Pride.

OutFest Peru is a queer film festival that tours several cities in Peru, and hits the capital in late June every year. Screenings are of shorts and feature length films from around the world, although the movies are mostly from the Spanish-speaking Americas and Europe. Entry is usually free. Venues are usually not typical movie theatres, but rather smaller and more intimate settings including an art museum, part of the university and the Spanish cultural centre, making for events that bring the local and visiting LGBT+ communities together and allow for dialogue and support in smaller settings than most typical film festivals.

Lima’s Marcha de Orgullo, or pride march, also happens in late June (usually the last Saturday of the month). It has only been going since 2002, when the majority of participants had to wear masks to avoid being recognised. However, in the years since that first march, things have changed considerably and while there is still a considerable police presence, the march is now attended by thousands of people celebrating diversity and inclusion. Compared to North American or European pride events, though, it certainly remains a political march and less of a street party; you won’t find floats blaring music with skimpily dressed dancers flaunting their bodies. The march does take place in Peruvian winter after all!

While there are certainly challenges living in Lima as an LGBT+ person, especially if you compare the situation to many North American or European cities, there is still a large and diverse community in the city, so finding spaces to fit in and people to connect with is absolutely possible. Just be aware that there is still definitely a conservative attitude towards LGBT+ people generally in Peru, so whether or not you chose to be out will be an individual decision.

Have you lived in Lima? Share your thoughts in the comments below, or answer the questions here to be featured in an interview!