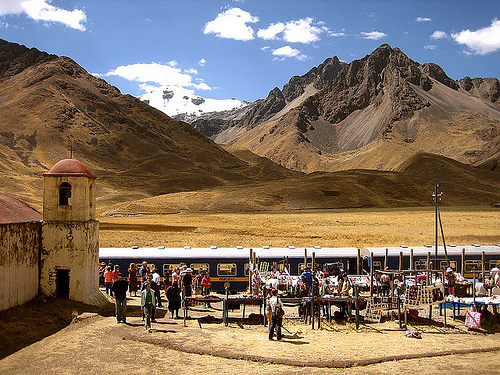 Rail transport in Peru was built for freight requirements rather than passenger needs, and so the country does not have a true network, but instead has two unconnected principal railways – the Ferrocarril Central Andino and the Ferrocarriles del Sur del Perú. The Ferrocarriles del Sur del Perú is the second highest railway in the world and runs inland, while the Ferrocarriles del Sur del Perú runs from the coast. The capital, Lima, has an electric mass transit system called the Tren Eléctrico, although it is commonly known as the Lima Metro. There is currently a single line with 26 stations which connects the southern area with the center and north-east portions of the city. The trains operate between 6 in the morning and 10 at night with a frequency of one train every 6 to 10 minutes, depending on the time of day. The ticket price is 1.50 soles – it is a flat rate and is not dependent on the number of stations you go. Students pay half the rate, but they need to apply for a special pass using their ID and student card for this. Payment for the ride is made via an electronic card which can be recharged at any of the stations.

The bus routes in Peru can be absolutely baffling to westerners, who are used to methodical and well laid out routes. In Peru, most bus routes overlap with one another and there are no printed itineraries, ticket booths, or even bus stops. While it may seem daunting at first, once you get used to the bus “system”, you will start to appreciate the choices and frequency. When travelling by the bus for the first time, use the bigger and well-established companies as many of the smaller companies have badly managed services and there is a higher risk of having your backpack or belongings stolen. Do not store your bag in the shelf overhead but instead keep it on your lap. Avoid taking the bus at night or during peak hours, which are from 5 to 8 a.m. and 4 to 7 p.m.

Taxis in the city are very cheap but they do not use a meter. The passenger and driver negotiate until they agree upon a fare that is reasonable to both parties. Do not enter a taxi until the taxi driver agrees to the rate. Most taxi drivers try to overcharge foreigners, so find out what the correct rate should be from locals. You do not need to tip the driver and should make sure that you have the exact change ready to pay as soon as you alight. When choosing a taxi, look for one that has a Setame (Servicio de Taxi Metropolitano) label on the windshield as these are regulated taxi cabs. You can also call for a Taxi Seguro or “radio cab” which offers a more secure and professional service. You will need to call them a minimum of 20 minutes in advance and the price is non-negotiable but they are more dependable. This is your best option if you need to travel at night.

Mototaxis are one of the most common forms of transport in Peru, especially in peripheral districts. These mototaxis are three-wheeler forms of transport and can accommodate between 1 to 3 passengers, depending on the type of mototaxi. The most common type of mototaxi in Peru is the converted motorcycle which is open on the sides and only has a shade over the top. The trimovil is a three wheeler with an enclosed cabin, and it can accommodate three passengers. While these mototaxis are a quick and cheap way to get around, they are also extremely flimsy and will not offer much protection in case of an accident.

The word micro is an abbreviation of the word ‘microbus’ (aka minibus). These are privately owned vehicles that are very cheap -a sticker on their windscreen indicates their travel points and they pick up and drop passengers anywhere along their route. These vehicles are often seen racing along, swerving dangerously between lanes while cutting through traffic.