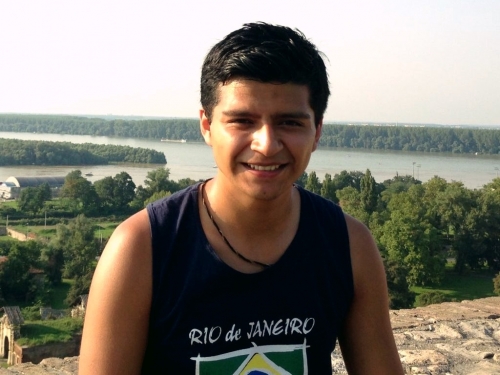 Hi Expat Focus friends, my name is David Huerta, I’m from Mexico City but I’ve been living in Warsaw, Poland for the last four years. I have a blog about Poland called ‘Chido-Fajny’ (‘chido’ means ‘cool’ in English, and ‘fajny’ means ‘cool’ in Polish). I’m a big football fan, my favorite teams in the world are Necaxa and Real Madrid. I love to write on my blog, to travel and to enjoy the beauty of Poland.Where, when and why did you move abroad?

I moved to Poland in March 2013. Why did I move abroad? Well, that’s a story I would love to share with you: I did an academic exchange during the last semester of my Bachelor’s studies in Paris, France. There I met with a Polish girl, we became a couple, but after the exchange finished we both had to go back to our countries. We were in a long-distance relationship for 8 months until I saved enough money for a flight ticket and a 2-week trip to Poland to visit her. I came to Warsaw, and one day before my flight back to Mexico I decided to stay in this amazing country. I called my parents to let them know about my decision and well… they wanted to kill me.

This is why I chose Poland, or rather: how Poland chose me.

Now that you know the story of how I ended up in Poland, well, at the beginning I had many challenges to face. First, of course, there were the obvious ones like: lack of money, not being able to understand the Polish language and getting used to the cold Polish weather. But the biggest challenge I faced was to get my residence permit! It is the WORST bureaucratic procedure I have to do basically every year, and all the foreigners just hate it in Poland.

Yes, in the last couple of years Warsaw and Poland in general have been gaining popularity among the expat community. Every month, dozens of foreigners come to Poland to work or study! It is incredible to see it.

When I moved here four years ago it was really strange to meet with another Mexican, and the moment you met one they became your best friend ever. Nowadays, many people from all over the world start a new life in this European country.

What I like the most about Warsaw is the safety of the city. I came from Mexico City, which is one of the most populated cities in the world and sometimes it’s a completely chaotic city, but still it is the best city in the world for me.

To me Warsaw looks like a really small city. You can walk alone at 2 or 3 am in the center of the city and you will be safe. The city is really calm, and everyone will find something for themselves here. Even though Warsaw was rebuilt completely after the Second World War, you can still feel its history and uniqueness. It is incredible!

What I dislike the most about being an expat is that you are far away from your family, childhood friends, traditions, culture, people, history and food. It doesn’t matter if you have been living abroad 1, 5, 10 , 25 years of your life, you will always miss your home country.

Probably the biggest and one of the very first cultural differences I experienced is the way of introducing yourself to a woman you just met. In Mexico it is normal to give a kiss on the cheek when saying hi to a woman, even if you see her the first time in your life. In Poland it is different! If you do this, people will look you in a weird way and think: ‘What is this pervert guy doing?’. In Poland you need to give a handshake every time you meet a new person. This was something crazy for me!

An honest advice that I can give you is to be a little bit more prepared than I was when I moved to Poland. At the beginning you feel like Superman because of taking such a big decision by yourself, but honestly speaking it would be super nice to be well-prepared before moving here, for example having money for more than 2 weeks. But anyway, if you are planning to move to Poland you can contact me via my blog and I can give you some tips so you can enjoy your stay here.

I see myself living in Poland for many more years, maybe forever, but of course it depends on a lot of things. I know now that the only country apart from Poland that I would consider moving to would be Mexico again. I’m not sure if I would like to leave everything again and start from zero in a different country – it was nice once, but I would rather travel to many more cities and countries instead.

You can keep up to date with David's adventures on his blog, Chido-Fajny.