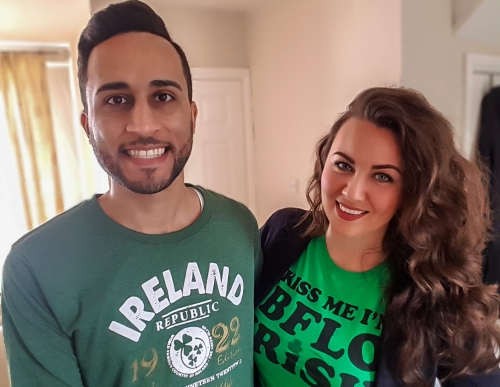 Danielle: Seems like a simple question but it’s actually a bit more complex. I first moved abroad during University and lived in Spain for a semester.There I was bitten by the travel bug and so after graduating University in the States, I decided to return to Spain once again. I then moved back to the States and after two years, Franklin decided he wanted to go abroad as well. So, in the summer of 2014, we as a couple decided to move to Poland.

We had tried to live the lives that were expected of us in the States. We went to school, found a great place to live, bought lots of nice things, and had corporate jobs with good salaries – but we felt like we were exhausted all the time and never had time to enjoy the things that we were working so hard to afford. We finally decided to sell everything we had that didn’t fit in a suitcase and set off in search of a simpler lifestyle. There really was no specific reason that we chose Poland. Franklin applied to companies in many different countries and was able to get a job in Wroclaw. We were up for an adventure in any new country so Poland it was!

Many challenges! There was a lot of planning involved that had to be executed within certain time frames. For example, timing exactly when to give notice at work. We needed a period of time long enough to make the right amount of money for the move but also short enough to give us time to sell our cars (which were needed to get to work) before leaving. We also have two dogs, one medium and one large sized. We had to do a lot of research about flying with them and neither one of us had prior experience of flying with animals. Also, we had to research all the regulations on importing them to a new country. There was a lot of paperwork involved with that and many trips to the vet to get vaccinations and clearance to fly.

Arriving in Wroclaw, we were surprised to find many expats from quite a variety of countries. There were many American expats as well.

Since we have chosen to live more of a minimalist lifestyle, it’s very convenient that, generally speaking, in Europe the apartments / flats / houses come fully furnished, even including things like glassware and cutlery. It’s less for us to have to worry about buying or moving around with us.

Honestly, not much. Even in our hardships abroad, we’ve said more than once that we’re still happier now than we were before. The language barrier can be stifling at times but you learn what you need and usually people are patient as long as you make a good attempt with the language.

Mostly work culture. You have much more free time with a better work-life balance here. Also, when you’re sick, people actually want you to stay home and recover. We’ve experienced the pressure of having to work through illness at our jobs in the US. Also, drinking with coworkers and bosses after work or on a Friday! This is something very unfamiliar to us. I remember going on a business trip in the States and a coworker advised me not to drink any alcohol at dinner even if it’s offered. Here, bosses are buying round after round of vodka shots!

Assess your expectations. Do not leave your home country with the expectation that things will be the same in your new country. For example, if you’re leaving the US expecting AC in your house or people respecting your personal space or customer service or ice-cubes in your drinks at restaurants, then maybe you should rethink uprooting your life. If you’re looking for a lifestyle change and are open to learning about a new culture, then this might be the right step for you.

Eventually, we would like to get to a point where we can live our lives as digital nomads. We would like to build careers that function on a decent WiFi connection without the need for a physical office. This way we have the freedom of travel and the opportunity to experience more of what the world has to offer.

You can keep up to date with Franklin and Danielle's adventures on their blog, From Coast A Costa.

Would you like to share your experience of life abroad with other readers? Fill in the questions here to be featured in an interview!