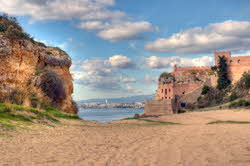 We are Diane and Eric. We are both trying marriage for a second time… so far! We are both former Devonians although my wife was brought up in Cornwall. We met through our work at a local newspaper and after knowing each other for eight years and having both been divorced for ten years we decided that we could make it work. That was back in 1991. So far, so good.

I have to say that it was Diane who had been hankering to get out of the U.K. She had been trying, unsuccessfully, to do so since 1960. Her first marriage and the places she was trying to emigrate to, mainly Canada and the US, were her obstacles. When we met, Diane had her own property in Spain, (Almogia, Andalusia), and I had my own place in Plymouth, U.K. Both properties had mortgages.In 1993 I decided that I could retire from the newspaper aged 47. With my severance we paid off the mortgage in Spain and spent some time there. It very, very quickly became apparent that the Spanish authorities were nothing short of crooked so we rapidly bid a retreat from Spain and sold our detached villa in two acres of land there. It actually took us just under 24 hours from the time we decided to sell to the time we sold. I guess we didn’t ask the correct going rate. Our English agent there, we learned later, actually increased our asking price by 39 per cent and sold it immediately. Needless to say, that was her “commission”. Spain was now looking even less attractive!

After two years of ‘retirement’ the money started to diminish, so I went back into the workforce. Meanwhile, we invested our money in property in Kissimmee, Florida and after a couple of years we bought a second property in the same area. We both loved our time as owners over there and looked into the possibilities of moving there permanently. We are now around the year 2006. With all the Iraq problems that both the U.K. and the U.S. have been involved in, we were amazed to find how difficult, no, impossible, it would be for us to emigrate there. Easy for most nationalities, particularly difficult for the British – their allies! We decided to sell both properties plus our home in Plymouth and move somewhere. Didn’t know where, just out of the U.K. where, we thought, bureaucracy and political ‘correctness’ were stifling a decent life there.

Unfortunately for us, the American property market was at the start of one of their deepest troughs for many years and it took us two years to finally sell up there. Once again, our English property sold within 24 hours after we put it on the market in late 2007.

Our original intention was to buy a home for us and a second property to let to supplement our pensions. By this time we had become reasonably expert in the letting field. We didn’t know where we were going except that the U.S. and Spain was out of the question. We looked at our options, which included Croatia, Bulgaria and Turkey. We had never visited Portugal but we had English friends who had moved to the Portimão area. So in the late 2007 we made our first visit. Like so many others, we loved the area, the people and the climate. With the collapse of the American property market and the downfall of the U.K. pound and U.S. dollar our original investment had fallen by $160,000. We were no longer looking for two properties and our original intention of a detached villa home had also to be resized!

Looking back, our only challenge was moving all our property over to Portugal. We also had to arrange to store our belongings for, what turned out to be, 12 months. Having sold all three of our investments, we also had to rent somewhere to live while we looked, arranged and bought somewhere to live. The one good piece of advice we took was to bring everything with us. For this there was also a downside – storage in our final resting place. But the upsides were that, here, everything worked fine. Similar voltage, so no problems with electrical appliances. Television worked fine, just plugged it in and away we went. Not too much problem with the car, just the matriculation with took around five months and €160 odd to sort out, and internet connection, which has turned out to be brilliant.

As previously mentioned, we had to downsize considerably. We trawled the internet and contacted an estate agent here who arranged some viewings for us which included Portimão, Lagoa and Lagos. At least that gave us a feel for the types of properties which were now within our grasp.

We got back to the U.K. and once again looked through the internet at properties within our budget, specifically two or three-bedroom apartments. We saw just one which took our fancy and made an appointment to come over to view. Although we didn’t really know the area it turns out to be just perfect for us. We are in Bemposta which is just outside of Portimão near to Alvôr. We love it here. We bought a ground-floor, three-bedroom apartment (I don’t like heights and stipulated that I preferred the ground floor).

The agent who sold us the property also introduced us to a manager in the BBVA Bank and to an Advogado in Alvôr. Both of these introductions proved to be first class. We set up the bank account with ease, opening both a Euro and a Dollar account into which we could transfer our cash from both countries.

The visit to the Advogado was painless and we signed documents giving him ‘power of attorney’. When the time came, the sale went through with no problems while we were still in the U.K. The solicitor arranged our ‘Contribuente’ cards and all the transfers of utilities to our name and on the appointed day we arrived at his office to collect the keys to our new apartment with no hitches whatsoever. He even arranged for our eight-year tax-free benefit. What’s more, he gave us back €560 which he had over charged on his original quotation. Brilliant!

Do we intend to move? Not unless the Euromillions is favourable to us. Even then, it wouldn’t be far from where we are now. We love it here.

I don’t know. There is an apartment in our four-storey block on the second level which is up for sale at (€110,000). It is a two-bed place and based on this, if it sells at that price, I would say the market has stayed at around the same pace as it was when we bought in April of 2008. There is still a lot of building going on in the surrounding area and somebody is buying them all!

There are many, many expats in our area. I do feel sort of sorry for the indigenous population with all these English-speaking people around. Not to mention the fact that we are buying up all the accommodation here. But they are very tolerant, very polite and, in most cases, very kind to us. But what that does mean is that there is no shortage of helping hands particularly with the language.

We have friends here who are Portuguese as well as expats. Our immediate neighbours are Portuguese (husband) and English (wife), so, yes, we feel we have been well accepted by the locals. I think they appreciate the fact that we have chosen to retire here rather than take any employment away from them or bleed the system, and that we are attempting to learn their language, difficult though it is.

Apart from this winter, the weather is what attracts most people here. We love the climate. We love the relaxed pace of life and the gallões.

We dislike the driving here. They don’t seem to make vehicles for sale in Portugal with indicators! We’re not used to the hiked prices here yet. But, as I’ve said many times, with the internet the world is a smaller place and we can buy from anywhere. What else? Nothing, life is good.

The same advice which was given to me. Don’t leave anything at home in the U.K. bring everything with you, even if you end up selling it over here. Some things may look like “boulders in your way” but don’t be afraid to seek the readily available advice around you and they will become “grains of sand”.

None! Living the rest of our life here from day-to-day!