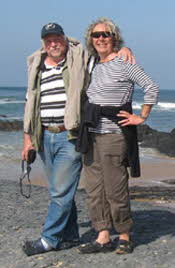 Robin & Shirley Hepworth. I’m a 48 model ex IT Manager; Shirley is a coronation special and a Maths, Chemistry and Biology teacher. Plus Nellie our 2002 Doberman x German Shepherd dog.

In 2007 we sold up and moved to the Western Algarve, Portugal. Why? Many reasons – better quality of life, less stressful living, nice people, good food, wine & Medronho! We first visited Portugal in 2001 to take part in a sponsored ride from Alcoutim on the Spanish Border to Cape St Vincent in aid of RDA & PSP. I was riding and Shirley part of the support crew and as a result we saw parts of the Algarve most Algarveans never see. We came home feeling that the Lagos area would be a great place to live.What challenges did you face during the move?

We spent a long time planning the move. E.g. examining various options as to how to physically move ourselves and a large dog, finding good homes for our remaining elderly Morgan Horses, what to take with us and what to get rid of. From earlier visits we had made several good contacts and we used them to give advice and assistance which has proved to be very valuable including Expat Focus, AFPOP, etc.

We visited in early 2007 to get our Finance Numbers, open a bank account and for Shirley to have a couple of interviews at International Schools in the area. We also arranged to rent a 2 bed cottage near Lagos over the next winter, and walked through several villages to get a feel for the atmosphere (some we liked, others not!) We came back in May 2007 to take part in the sponsored ride from Alcoutim to Cape St Vincent again! We’d bought a LHD Galloper and decided to drive via the Channel Tunnel as the easiest option and surprisingly lowest cost. Matriculation proceeded as usual until a demand for €10k was reduced to €700 which gave us quite a lot of extra cash!

As Shirley was working at the Vale Verde International School in Burgau we felt that West & North West of Lagos would be the best area to look. Our experience in the cottage at the end of a track and top of a hill had given us a better idea of what to look for, i.e. in a village rather than isolated in the countryside, where the car was required for everything!

We then had a stroke of luck when one of Shirley’s colleagues’ Estate Agent sister got us some details of properties in the Almadena area, including one that wasn’t quite yet for sale, but looked and sounded good from the details and pricewise. We went to see it and had the immediate buzz we’d had when buying our last house in the UK. Revisited after seeing a few more properties and were convinced that it was for us. Shirley’s parents visited and also had a look around – approved!

It’s a 3 bed 2 bath townhouse in a development of 3 non-identical houses, and it’s our first new house, first house with a fireplace and first house with a huge built in BBQ! We cast about for a name and nearly called it “Three Chimneys” which would have been a problem as we later found out we have four! Casa Alegre is “The Cheerful House” which sits between Casa Jovial and Casa Feliz. Of course Alegre can also mean “Tipsy” – hmmm!

One set of neighbours live permanently there and the other comes and goes but doesn’t rent it out.

The purchase went very smoothly with banks, estate agents and vendors providing information etc. all along the way – and the Promissario and Notary Face to Face events were very formal and to our minds much better that relying on distant solicitors etc. Very nice to hand over the cheque and receive the keys immediately! Smiles and handshakes all round. Then to receive a large wad of paperwork with plans & inspections is also reassuring!

To be frank we haven’t really been looking that hard, but it is noticeable that properties that were for sale 2 years ago are still for sale now and at reduced prices.

I’m retired – Shirley didn’t have a problem finding a post as Secondary level teachers with Maths & Science qualifications aren’t ten-a-penny! And teaching in a small private school in Portugal is much less stressful than in Giant Secondary Schools in the UK.

To our minds there is a good balance between the expat numbers and the village locals – there are frequent events arranged at the Social Centre & Church Hall for both Expats & Locals which are fun and well attended.

We seem to get on very well and walking Nellie can be a series of Bom Dia etc etc. The Portuguese if treated with politeness are very friendly. We have been “adopted” by a couple of the senior ladies of the village and do get bags of fruit & bunches of flowers quite often!

It’s a very pleasant village which isn’t over developed, but has a good range of facilities, i.e. Bars, Restaurants, Shops, Mercado Municipal and other facilities. The Onda Bus Service is excellent so we can get around without using the car. Almadena is close enough to Lagos and the Motorway to get around quickly and beaches on the South and West Coasts of the Algarve are within easy reach. Being off the coast North of the N125, Almadena isn’t heavily affected by the seasonal influx of tourists as can happen in more coastal places.

The slow rate at which we are picking up the language! That’s our fault and is to be addressed during 2010. If we’d moved to France we feel we would have been pretty fluent by now

Join Expat Focus and AFPOP as soon as possible! It definitely helps to have expat contacts who can give advice on a day-to-day basis. If possible rent before buying to allow you to get a feeling for the life & area, and what type of property will suit you best – as mentioned we changed our minds on that issue. Oh – being lucky helps!

We hope that Shirley can reduce her workload next year to 3 days a week, do a couple more years and then retire permanently which would coincide with the commencement of my State Pension (unless the UK raises the age!) Then we can look at two things we really want to do which is have a trip to New Zealand where my parents lived for 3 years, and also have a trip to Oklahoma City for the Morgan Horse World Championships! Meantime some enhancements to the house, exploration of Portugal including a Douro river trip etc! We also want to update our website, even adding some video!!