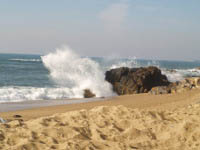 Portugal has many popular locations – the capital city Lisbon, the sea and sun-soaked region of Algarve and Porto, the home of the famous port wine. But there’s also a side of Portugal that still remains relatively untouched by the bustling tourism industry. These places are remote, but that’s exactly what makes them so special. Here are 5 places in Portugal you’ve probably never heard of, but might want to move to.

Monsanto in the Castelo Branco district is an ancient village perched on a mountaintop and overlooking the Portuguese countryside. It has remained unchanged for centuries and is considered to be a living museum.The village has little streets carved through rocks and the quaint houses sit between huge boulders. There are even doors fitted right onto boulders and these lead to spaces that are built into the rocky surroundings. Monsanto is often given the title of the ‘most Portuguese village in Portugal’. Many of the buildings also bear the influences of the Portuguese Manueline style of architecture. From Lisbon airport, there are train and bus services that take you to Castelo Branco. You can also take a bus or train from Porto to Castelo Branco.

Until some time ago, Sintra was unheard of for many tourists. Although it has started gaining popularity as a tourist destination, it still manages to retain its old world charm. The town has many royal retreats, castles and 19th century architectural structures and this had led to it being declared an UNESCO World Heritage site in 1995. Sintra’s 33,000 residents live amidst the many parks and gardens that surround the old castles and palaces. Sintra is especially known for the park and palace of Pena, built by King Ferdinand II. The palace is strategically constructed so that it can be seen from any point in the park. The park itself is a thing of beauty with a forest and many lush gardens consisting of several hundred species of trees from all over the world. To reach Sintra, you can take the train that leaves from Rossio Station in Lisbon. There is also a regular bus service that takes you from the railway station to various parts of the town.

The charming village of Mesão Frio is located about 12 kilometers west of Peso da Régua and is surrounded by the majestic Serra do Marão. Home to the picturesque gothic parish church of São Nicolau with its gorgeous painted ceilings and tombstones and with just 4,652 inhabitants, Mesão Frio is a peaceful place with a tradition of winemaking. The landscape consists of vines growing on sloping terraces on the riverbanks interspersed with manor homes and estates, the most notable of these being Pousada do Solar da Rede, an 18th century manor house. The village is also known for its wickerwork and some culinary specialties that include falachas (chestnut cakes).

Casa do Penedo can be translated into House of stone; and that’s exactly what it is. About ten kilometers from the northeast of Fafe’s city center and located high up in the mountains, Casa de Penedo was built to be a mountain retreat by an engineer from the nearby city of Guimarães in 1974. He built it around the already existing natural space that was created by four enormous boulders. Except for the roof, windows and doors, everything else is made from rock. The interiors are rustic with a wooden staircase and a sofa constructed from eucalyptus wood and concrete. There is no electrical installation at all in the structure. Unfortunately, due to some vandalism and robberies, the place had to be installed with heavy security doors and barred windows.

The town of Pinhão is located along the Douro River, approximately 25km upstream from Peso da Régua. Set in the heart of port wine country, vines and wineries are visible almost everywhere. Pinhão is a quiet, sleepy town that comes alive during the autumn harvest when there is a bustle of workers and tourists that participate in wine preparation activities. The Pinhão train station, built in 1937, is a proud landmark of the town, decorated with beautiful blue and white Azulejo tile work that portrays different Portuguese scenes.