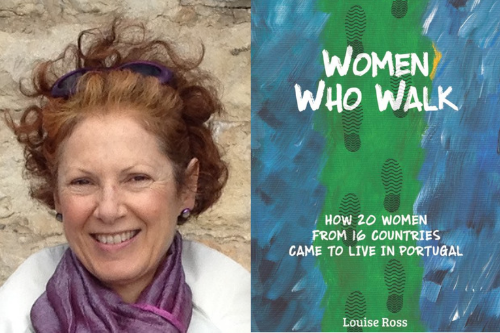 Louise, tell us a bit about yourself and your interest in expat life.

I’ve lived outside of my country of origin, which is Australia, for more than three decades. I moved to Portugal from Colorado and there, I didn’t think of myself as an expatriate.All my friends were American – bar a couple of Australians – because there was minimal-to-no cultural or language barrier.

Five years into living in Portugal, I’m very much involved in the international community where spoken English, and a life lived abroad, is the common language. In that regard, the expat community is a lifeline of support while living in a culture with a language that is particularly challenging to learn, and where the customs are different.

You’ve recently written a book, Women Who Walk, about women who came to live in Portugal. Tell us about the book and what readers can expect from it.

One of my readers summed up nicely what other readers might expect from Women Who Walk:

“I literally gobbled this book up, waking each morning with the promise of a new adventure. As an American who has moved both to different states, as well as to different countries, I can relate to both the excitement and the challenges inherent in these women’s stories. This book is not just for people who desire to live another life, but also for people who want to feel inspired by those “blueprint breakers” who make it happen. Regardless of whether you move or not, this book will fill you with the power of possibility!” – Virginia Walker, Lisbon

What was it that prompted you to write it?

Not long after moving to Portugal, I was hearing captivating personal stories from women in the international community, the caliber of which caused me to take stock of just how exciting and stimulating it was to be mingling with a group of worldly, educated, well traveled and intrepid, multi-lingual individuals. I decided some of those stories were worth recording, for posterity, because the oral histories that make up Women Who Walk straddle two centuries and the massive global changes that have taken place during that time.

The book includes interviews with twenty women who moved to Portugal. Were there any common themes that kept coming up in the interviews?

There were topical themes such as adult third culture kids; trailing spouses; and the question, ‘Where is home?’

Beyond this are the courageous, spirited journeys that all the women undertook. And then Alison Collis, a psychotherapist from the UK who practices in Lisbon, where she works with expatriates, global nomads, and adult third culture kids, writes in the Afterword:

“Women Who Walk are Blueprint Breakers: women who either intentionally discarded the cultural norm of do well at school, graduate, get a job, settle down in one place, get married, have kids or they accidentally discarded those norms and wound up enjoying less conventional, peripatetic and international lives.”

What surprised you about the interviews?

The response from readers to the stories has surprised and delighted me! The stories in Women Who Walk are stimulating big conversations around the topical issues stated above. Consequently, I’m certain of the potential for this book to be a popular book group read.

In your opinion, what are some considerations women specifically have to think about when they're planning to move abroad?

Oh boy, I may not be the best person to answer that question. I’m a fairly impulsive person who has acted on the Nike catchphrase: “Just Do It.”

Having moved to Portugal yourself, what would you recommend about it? What do you find challenging?

After living 27 years in the U.S. I was worn out from the pace of American culture, or just tired from trying to keep up. Portugal is slower-paced and in that sense it’s gentler, and certainly far less aggressive. I live on the coast 20 minutes outside Lisbon and the scene here reminds me of Australia where weekends are spent in cafés that line the beachfront and where not much happens except the sharing of good conversation over a meal with friends.

I find the way the Portuguese drive very challenging – they’re such gentle, tolerant people, but put them behind the wheel, and they morph into Italian drivers!

Finally, when you're not writing, what do you enjoy doing in your spare time?

I came to Portugal to slow down. Choosing not to drive here has helped, because now I walk everywhere or catch public transport, which means it takes a lot more time to get anywhere! In contrast, I quickly got involved in the organization, International Women in Portugal (IWP), and from 2015-2017, I was President. This opened doors to the international community and suddenly, my social circle expanded exponentially. Additionally, IWP offers a wide range of activities, events, and coffee mornings which means I can be as social and active as I wish, or I can choose to enjoy the very relaxed lifestyle that comes with living on the Estoril coastline, where the sun and surf are a constant.

You can buy a copy of Louise's book, Women Who Walk, on Amazon.