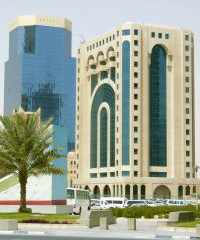 Qatar’s significant oil riches have placed it in an elite club worldwide, and it shows no sign of having to become reliant on other industries in the immediate future, as its oil output is expected to remain steady for the next 23 years.

Even without economic diversification – a risky situation that leaves Qatar prone to the boom and bust cycles of hydrocarbon-based enterprises – Qatar’s control over 5% of the globe’s total natural gas reserves has earned it a first place ranking within the entire Muslim world. Numerous Islamic banks, including Al Masraf Al Rayyan and Qatar International Islamic Bank, are also contributing to a financial industry compliant with sharia law.

The country is also hoping to develop a tourism industry (including cultural or historical tourism) that will compete with, or just be complementary to, that of its much larger southern neighbor, the United Arab Emirates.Problems with Qatari labor law

The employment situation in Qatar, however, comes with some features that have repelled potential expat workers. In the past, perhaps one of the biggest “red flags” sent up by Qatar was the system that gave employers almost total control over the residence status and labor rights of their employees. This policy has come particularly under fire in situations where immigrant labor would be recruited and would, upon arrival in Qatar, be forced to accept contract terms that were not originally agreed to. This practice, which easily qualifies as a human rights violation, brought the country, in 2007, to the attention of the U.S. State Department’s Office to Combat and Monitor Trafficking in Persons.

Among other offenses, this reportage noted instances in which “workers who complained about working conditions or non-payment of wages were sometimes penalized, and prosecuted under false charges in retaliation.” Though Qatar did make any form of slavery or forced servitude illegal in sections 321-322 of its Criminal Law, it nonetheless did not make all acts of trafficking illegal – lack of resoluteness in this area has doubtlessly inspired a few would-be expat workers in Qatar to look elsewhere.

Though the picture painted by the State Department’s report seemed to be one of poor, uneducated workers from developing countries being “scammed” into accepting high-wage employment in Qatar, skilled and educated laborers can still have legitimate concerns about what protection the Qatari labor law affords them. Even entertainers and athletes with ‘celebrity’ status have voiced grievances recently, such as the international footballers contracted to the Qatar Stars League, about unpaid salaries and lack of mobility.

For expat professionals who pride themselves on their freedom of international movement, the local sponsorship system known as kafeel or kafala has traditionally been a problem, since it allows employers to set the conditions not only for residence within Qatar, but for leaving Qatar as well. This could involve the confiscation of passports and other valuable travel documents. On a less severe but still noteworthy level, the sponsorship did not allow for such to be transferred to other employers within the country.

Professionals and intellectuals within the country are certainly aware of this controversy. Ever since a workshop at Qatar University was held in 2011 on the Labor Law and the Law of Sponsorship, it has become more widely understood that the two documents are often in conflict with each other, or that the provisions of the latter (which is certainly of more interest to expats) are not adequately enforced.

Attempts to right the ship

Qatar’s government will be wise to implement a less restrictive labor law, since the diversification of its economy will be largely reliant upon expatriate professionals. Going by simple demographics alone, the country’s economy is set to outpace the growth of its population, meaning ‘outside help’ will be a must to sustain economic growth. Qatar’s significant income from the hydrocarbon sector gives it, among other luxuries, a greater opportunity than most economies have for investing in foreign exchange and recruiting highly knowledgeable professionals.

Qatar’s National Development Strategy, covering the years 2011-2016, is one policy change that may provide some solutions. This document – readily downloadable from www.gsdp.gov.qa – shows a serious acknowledgement by the Qatar bureaucracy that it is dependent on expatriates, and that, among other things, special educational facilities for expat children should be enhanced.

Among its other provisions, this proposed plan will grant permanent residency to foreign workers who meet “predetermined criteria”, and, most encouragingly, confesses to the situation about which so many complaints have been made. The document acknowledges that the kafeel sytem “constrains the mobility of expatriates and thus their ability to respond to labour market signals”, also noting how “a rigid labor market hampers the development of a workforce commensurate with aspirations for a knowledge economy.”

Unfortunately, the “predetermined criteria” are not explicitly stated, and can only be guessed at from studying the socio-cultural landscape of Qatar. It is instructive, though, that one portion of the National Development Strategy stresses expatriate education in “Qatari values founded in Arabic culture and Islam”, and also claims that the major goal of professional training should be to “a solid grounding in Qatari moral and ethical values, traditions and cultural heritage”.